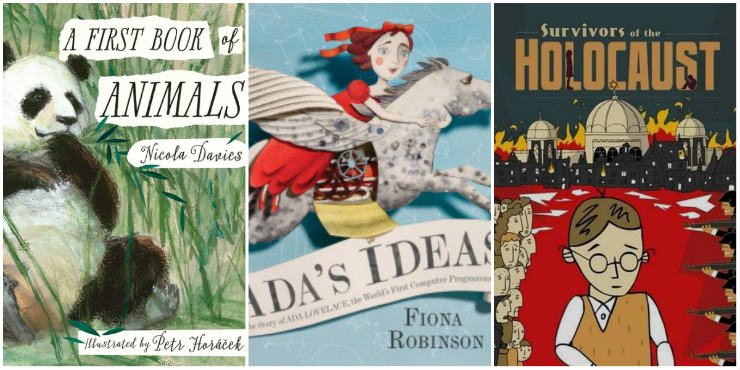 It’s National Non-Fiction November! If your child wants to nurture a particular interest, or prefers non-fiction to fiction, why not reserve a book from the Royal Society Young People’s Book Prize or School Library Association Information Book Award shortlists?

The Young People’s Book Prize celebrates the best books that communicate science to young people and is chosen by groups of young people from schools, libraries, Scouts and Brownies, science centres and youth groups.

The Information Book Award aims to reinforce the importance of non-fiction books for children and is judged by librarians, SLA board members and a member of Peters Bookselling Services. There is also a ‘Children’s Choice’ vote in each age category: under 7, 7-12 and 12-16.

A First Book of Animals, by Nicola Davis & Petr Horáček

Nominated for both prizes:

“Nicola Davies presents a treasury of poems about the animal world, illustrated in great detail by Petr Horáček. Polar bears playing on the ice, tigers hunting in the jungle, fireflies twinkling in the evening sky and nightingales singing in the heart of the woods - there are animals everywhere.”

“Sophie was living at a dog’s home until she found her own home - with us! Come and meet this friendly little dog as she settles into her new family.”

“This is the perfect book for children aged 4-7. Supporting the national curriculum and providing all the information young minds need and much more, it is split into four sections - all about me, animals, people, and my planet - covering everything from the continents to the blue whale in fun and engaging ways.”

This Little Pebble: a look at rock cycles, by Anna Claybourne

“This Little Pebble begins with a child finding a small, forgotten pebble in his pocket. It uses this simple premise as a jumping-off point to explore what rocks are, where they come from and how fundamental they are to life here on Earth.

“This Little Pebble uses beautiful artwork to show the rich diversity of rocks all around us, with friendly, narrative text by award-winning children’s writer Anna Claybourne making the book feel like a journey.”

The Big Book of Bugs, by Yuval Zommer & Barbara Taylor

“Introductory spreads explain that bugs live nearly everywhere on Earth and give tips on how to become a young bug spotter. The fact-filled book is divided into key groups of bugs, all illustrated with scenic compositions.”

“Astronomers are discovering more and more information about space, making the subject a very hot topic in schools and out of it. This guide is full of genuine facts, answering all our space-related questions and prompting more along the way. Aimed at children aged nine and over, the pictorial info-graphics style illustrations provide easily digestible facts in bite-size chunks.”

“In 1666, London’s citizens woke to see the skyline above their city’s cramped wooden houses ablaze.

“The Great Fire of London is a hauntingly beautiful visual re-telling of one of the most well-known disasters in the city’s history. To commemorate the 350th anniversary of the fire, powerful and sumptuous drawings bring the events of November 1666 to life.”

“Stir up some sticky slime, build a Solar System with rubber bands, power a speed boat using soap, and construct an erupting volcano. ‘Home Lab’ is packed with 28 projects, using clear step-by-step instructions, everyday ingredients that can be found around the house and photographs to guide you from start to finish.”

RSPB Wildlife in your Garden, by Mike Dilger & Sarah Horne

“Discover the amazing wildlife you can find in your own garden with this fascinating guide! Find out all about garden birds, animals, plants, and creepy-crawlies. Turn the pages to discover colourful butterflies, friendly robins, shy hedgehogs, and much more. You might even get some unexpected visitors!”

“How long are your intestines? How many mites live in your eyelashes? Do all adults wear clean underwear? And much more! Find out disgusting, hilarious, weird and wacky facts about your body with this awesome book!”

Hello World: a celebration of languages and curiosities, by Jonathan Litton & L’Atelier Cartographik

“Learn to greet people around the globe in this interactive atlas of hellos.

“With over 150 languages, flaps to reveal pronunciation and fact-files explaining how to write ‘hi’ in hieroglyphs and how to sign ‘hao’ in Native American hand talk, Hello World opens up a world of exploration and greetings at your fingertips.”

If…: a mind-bending way of looking at big ideas and numbers, by David J. Smith & Steve Adams

“Some things are so big or so old that it’s hard to wrap your mind around them. In this book, the author looks at these hard-to-imagine objects and events and compares them to things we can instantly see, feel, and touch.”

“Ada Lovelace (1815-1852) was the daughter of Lord Byron, a poet, and Anna Isabella Milbanke, a mathematician. Her parents separated when she was young and her mother insisted on a logic-focused education, rejecting Byron’s ‘mad’ love of poetry, but Ada remained fascinated with her father and considered mathematics ‘poetical science’.

“Via her friendship with inventor Charles Babbage, she became involved in ‘programming’ his Analytical Engine, a precursor to the computer, thus becoming the world’s first computer programmer. This picture book biography of Ada Lovelace is a compelling portrait of a woman who saw the potential for numbers to make art.”

“Covering topics from anxiety and depression to addiction, self-harm and personality disorders, James and Olivia talk clearly and supportively about a range of issues facing young people’s mental health - whether fleeting or long-term - and how to manage them, with real-life stories from young people around the world.”

Who are Refugees and Migrants? What Makes People Leave Their Homes? And other big questions, by Michael Rosen & Annemarie Young

“What does it mean for people to have to leave their homes, and what happens when they seek entry to another country? This book explores the history of refugees and migration around the world and the effects on people of never-ending war and conflict. It compares the effects on society of diversity and interculturalism with historical attempts to create a racially ‘pure’ culture.”

“Based on a series of a BAFTA-nominated animated documentaries, the artwork in Survivors of the Holocaust has been reinvented to bring together six different survivors’ stories of the Holocaust. Every word rings with truth, whether it describes the bleak fear of arriving at Auschwitz or the sheer terror of Kristallnacht.”