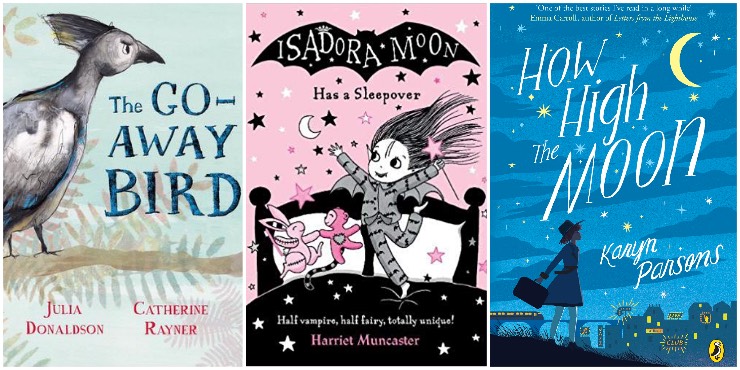 There are 101 Animals in This Book, by Rebecca Jones

“There are 101 Animals in This Book is part of a early learning series for children 3 years+ who are discovering the world around them. Split flip-flap pages encourage spotting and finding skills as little ones match up each set of animals with their correct environment and learn the animal names.

“With five beautifully illustrated scenes from Rebecca Jones, each animal is located in their natural habitat, and with activities on colours, counting, animal babies and more, there is lots to do and talk about.”

Say Hello to the Gruffalo, by Julia Donaldson & Axel Scheffler

The Bear and the Piano, by David Litchfield

The popular children’s book comes to board book format.

“Once upon a time, Peppa, George, Mummy Pig, and Daddy Pig were on a magical adventure in the fairy-tale woods. First they met a big (but not very bad) wolf, and then they bumped into three hungry bears! What will they find when they reach Granny and Grandpa Pig’s house? Little Red Riding Hood meets Goldilocks and the Three Bears in this new magical picture book that all fairytale fans will adore.”

“Meet Tad. She’s the smallest tadpole in a big pond, and lives there with all her tadbrothers and tadsisters. Although something else lives there too. Big Blub! And when everyone else starts to disappear, Tad starts to wonder if Big Blub will get her too. Or is everyone else going somewhere else; somewhere better? And if so, will Tad ever get there too?”

In the Swamp by the Light of the Moon, by Frann Preston-Gannon

From the illustrator of 2018’s big poetry hit, I Am the Seed that Grew the Tree.

“A little frog is singing to himself in the swamp one night. His song doesn’t seem complete, so he invites other animals to join in. Nothing sounds right until the littlest voice joins the song - that of a tiny firefly.

“A wonderfully illustrated picture book with the important message that small voices need to be heard too.”

First collaboration between Donaldson and Rayner.

“One by one, the other birds fly into her tree, wanting to talk or to play, but the Go-Away bird just shakes her head and sends them all away. But then the dangerous Get-You bird comes along, and she soon realises that she might need some friends after all…

The third book in the excellent Shape trilogy.

“Triangle and Square are visiting Circle, who lives at the waterfall. When they play hide-and-seek, Circle tells the friends the one rule: not to go behind the falling water. But after she closes her eyes to count to ten, of course that’s exactly where Triangle goes. Will Circle find Triangle? And what OTHER shapes might be lurking back there?”

From the illustrator of the Mr Gum books.

“The Naughty Naughty Baddies are wickedly wicked, awfully awful and diabolically dreadful, and they have just come up with a mischievous plan to blast off to the moon and to stitch up the President. But will our fiendish fraudsters come undone?”

“Join Captain Sparklebeard as she sets sail against the seas and dares to be different!

“Peg dreams of adventure and has big ambitions, but when she asks to join the pirates’ crew they won’t let her join because she’s too small and she doesn’t even have a beard! But can Peg prove, against all odds, that she’s the greatest pirate there ever was?”

The Green Giant, by Katie Cottle

From the winner of the 2017 Batsford Prize for Children’s Illustration.

“Bea and her dog, Iris, are staying with her grandad in the country. Bea is bored, but Iris’s adventures lead them to the small and rusty old greenhouse next door. Inside the greenhouse, Bea finds - a giant. A giant made entirely of plants and greenery.”

Sixth title in the picture book series based on Old Possum’s Book of Practical Cats.

“Join Cat Morgan the swashbuckling pirate as he sails the Barbary Coast.”

When a Dragon Comes to Stay, by Caryl Hart & Rosalind Beardshaw

“When a dragon comes to stay, will she behave herself? Why, of course she will. Obviously she knows she must share her toys, eat daintily and skip happily upstairs at bathtime. Well… not quite. Like all toddlers, this little dragon finds good manners a tiny bit tricky. It’s lucky she has some friends to help her.”

Isadora Moon has a Sleepover, by Harriet Muncaster

“Isadora Moon is special because she’s different. Her mum is a fairy and her dad is a vampire and she’s a bit of both. When Isadora is invited to stay at her friend Zoe’s house she’s so excited - she hasn’t been to a sleepover before! And with a touch of Isadora magic, this is going to the best fairy vampire sleepover ever!”

“Evil Emperor Penguin is trying to take over the world from his Evil Lair in Antarctica! But it turns out he’s not the only evil mastermind in the world domination game.”

“The Bolds are very surprised to be visited by Fred’s mother, Granny Imamu. She’s travelled all the way from Africa, and now she’s here, she does not approve of what she finds. Hyenas, living as people - whatever next!

“Granny Imamu starts to stir up mischief with twins Bobby and Betty, encouraging them to get in touch with their beastly side at school. And then the twins’ teacher comes to the Bolds with a rather unusual problem: her grown-up son Jeffrey just isn’t like other people. He’s rather hairy, doesn’t much like to talk, and loves to monkey about. If animals can become people, could it happen the other way around?”

How High the Moon, by Karyn Parsons

“It’s 1944, and in a small, Southern, segregated town, eleven-year-old Ella spends her summers running wild with her cousins and friends. But life isn’t always so sunny. The deep racial tension that simmers beneath their town’s peaceful facade never quite goes away, and Ella misses her mama - a beautiful jazz singer, who lives in Boston.

“So when an invitation arrives to come to Boston for a visit Ella is ecstatic - and the trip proves life-changing in more ways than one. For the first time, Ella sees what life outside of segregation is like, and begins to dream of a very different future. But her happiness is shattered when she returns home to the news that her classmate has been arrested for the murder of two white girls - and nothing will ever be the same again.”

Second novel from the author of The Mystery of the Colour Thief.

“Kat is a 12-year-old girl who loves working on her super-heroine comic, Girl 38 - the girl she longs to be like. But she’s not brave, or fearless. At school, Gem is no longer her ‘best friend’. And at home Kat is lonely while her parents are busy working long hours. She’s even a bit afraid of her elderly neighbour, Ania. But when Ania has an accident Kat surprises herself by rushing to the rescue - just like Girl 38.”

“When Anna and Nils meet Bob Gribble after school one night, little do they know his true identity is Gribblebob, a goblin from the other side of the veil. As the mystery of his presence in their village unfolds, Anna and Nils’ after-school routine is quite tipped on its head.”

All the Fun of the Fair, by Sophy Henn

Second in the Bad Nana series.

“After a dramatic jailbreak at a top secret prison, the planet’s most dangerous supervillains are on the loose! Luckily Murph Cooper and the Super Zeroes are on hand to chase them down.

“But though they manage to bring in a whole host of baddies, they can’t find their nemesis Magpie anywhere. Little do they know that he is close by, and he’s linked up with another old enemy. The super smarmy Nicholas Knox is back! Together, they’ve developed a dastardly machine that can give people superpowers! In the wrong hands it has the potential to bring about the end of the world of Heroes as we know it - and it just happens to be in the wrongest hands of all!”

Amelia Fang and the Half Moon Holiday, by Laura Ellen Anderson

Third in the series.

“Amelia and her friends are back in Nocturnia, but there’s a new villain to battle! This evil creature is stealing everyone’s memories. How can Amelia save Nocturnia when no one can remember who she is?”

Little Badman and the Invasion of the Killer Aunties, by Humza Arshad & Henry White

“Humza Khan is the greatest 11-year-old rapper Eggington has ever known: he is Little Badman and he is destined to be rich and famous.

“But when Humza’s music teacher is taken ill his dreams are put on hold. His Auntie has stepped in as substitute, and nobody seems to care about the unorthodox teaching because of the endless sweet treats. As other teachers start to disappear, with more Aunties appearing in their place, Humza knows something isn’t right.

“With the help of his elderly Uncle and friends Umer and Wendy, Humza discovers that the suspicious Aunties might not be as friendly as they seem. Now he must find a way to destroy them before they take over the world.”

The Wonder of Trees, by Nicola Davies & Lorna Scobie

Another excellent natural history book and companion to The Variety of Life.

“Did you know that there are over 60,000 tree species? This book explores the extraordinary diversity of trees and forests - the lungs of our earth. There is something to delight on every page with fascinating facts and figures.”

Stories for Boys Who Dare to be Different 2, by Ben Brooks & Quinton Winter

“What have the footballer Kylian Mbappé, the philosopher Socrates and the singer Ed Sheeran all got in common? All three of them defied expectations - going against the grain and pursuing their dreams - despite a seemingly impossible barrage of obstacles and difficulties. Their stories are incredible, as are those of the tap-dancer Evan Ruggiero, the Pokémon creator Satoshi Tajiri, and the other inspirational boys who fill the pages of this extraordinary book.”

“A dynamic and comprehensive introduction to physical geography, including information on the climate, volcanoes, erosion, the weather, ecosystems and humans. Illustrated with photographs, maps and diagrams it will capture the imagination of young readers.”