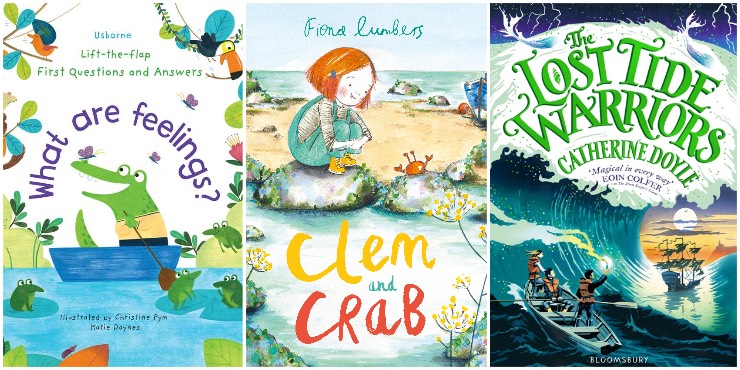 “Enter a magical world and go on an underwater adventure with a helpful sea unicorn! With push, pull and turn mechanisms and a sparkly foil cover wheel, this book has plenty to keep little ones engaged and entertained.”

Novelty adventure based on the Apollo Moon landings.

Brenda is a Sheep, by Morag Hood

From the author of The Steves and I Am Bat.

“Brenda says she is a sheep, but why does she look so different from her fluffy friends?

“All the sheep adore Brenda. With her sharp pointy teeth and cool grey fur, she’s the snazziest sheep around. But Brenda is also very hungry, and doesn’t much like the taste of grass - she soon begins plotting the most delicious feast of all. But will the sheep notice that Brenda isn’t quite the same as them?”

“Queues at Baby Frank’s famous zoo are dwindling and there’s only one person responsible - meet Baby Bruce. He’s greedy, fame-hungry and he’s opened up a rival zoo nearby. The problem is, all the animals at Baby Bruce’s zoo are unhappy. What’s Baby Frank to do? Face his nemesis and stage an epic baby jail break, of course. Hold on, this is going to be one great escape!”

Clem and Crab, by Fiona Lumbers

Authorial debut from the illustrator of Luna Loves Library Day and The Secret Sky Garden.

“Clem is an explorer, a collector, a protector of the seas! Treasure hunting on her beloved beach, she stumbles across Crab, his claw stuck in a plastic bag. Crab will be much safer and happier in the city with Clem, but doesn’t he belong on the beach?”

Second picture book offering from the author of A Series of Unfortunate Events.

“A mischievous boy has unleashed an angry swarm of bees! The result is a zany gallop through a charming town where readers will encounter evidence of some bad behaviour, some frenzied anger and thankfully, a hug and some spaghetti.”

“Do you have a little mermaid who would rather do anything than sleep? This is the perfect bedtime tale for them! Written specifically for bedtime, join Splash the littlest mermaid as she dives and leaps through the underwater kingdom.”

New from the author of Aunt Amelia, The Something and the 2019 Kate Greenaway Medal shortlisted The Day War Came.

“Hello Friend! tells the story of one relentlessly big-hearted and enthusiastic little girl who is insistent on befriending a certain little boy. And why wouldn’t he want to be friends with her? She’s very good at sharing - in fact, she insists on it, even if it’s a sandwich that he doesn’t like. And she’s certain that being outside is their favourite thing to do, however reluctant he looks.

“But while he doesn’t seem keen on many of the things that she loves to do, first impressions can be deceptive, and there is one thing he’s very keen on after all - being friends.”

Molly Rogers to the Rescue, by Cornelia Funke & Kasia Matyjaszek

From the writer of Inkheart, this title for younger children is part of the Little Gems super-readable collection, optimised for readers with dyslexia and visual stress.

“Thieves, greedy pirates and mischief-makers are no match for Molly Rogers!

“When Molly and her mother, Barbarous Bertha, discover that Captain Firebeard is destroying Monkey Skull Island in search of buried treasure, they set sail on the Red Swallow to save the island and its animals from his clutches. But Firebeard will stop at nothing to get his treasure - how will Molly outwit him this time?”

Agent Weasel and the Fiendish Fox Gang, by Nick East

“Strange things are happening in the United Woodlands. Rabbit warrens have been peppered with itching powder. Squirrels’ nuts are missing. Even Badger’s bottom has been shaved! All the clues point to the Fiendish Fox Gang. It’s time to call Agent Weasel, woodland super-spy.

“But before they can even finish their stakeout picnic, Weasel and his trusty dormouse friend Doorkins are captured by the villainous Vixen von Fluff. Can our heroes escape? Can peace be made in the United Woodlands? Will they get afternoon tea and biscuits? Does Agent Weasel have a clue what’s going on? All these very important questions will be answered in this rib-ticklingly funny adventure, with glorious illustrations throughout.”

Great reviews coming in for this fantasy debut.

“Spell Breathing does not come naturally to Rayne - she loathes the hours of practice, the stacks of scrolls, and the snapping mud devils that cover her mother’s precious spell book. But it is spell breathing that keeps her village safe from the dreaded monster curse that plagues their world.

“It is ancient powerful magic, but as Rayne learns to her horror, it is also fragile. In one clumsy move, the magic that keeps them safe is broken, her village is plunged into danger, and an incredible adventure begins.”

Sequel to The Storm Keeper’s Island.

“Fionn Boyle has been Storm Keeper of Arranmore for less than six months when thousands of terrifying Soulstalkers arrive on the island. The empty-eyed followers of the dreaded sorceress Morrigan have come to raise their leader and Fionn is powerless to stop them. The Storm Keeper’s magic has deserted him and with his grandfather’s memory waning, Fionn must rely on his friends Shelby and Sam to help him summon Dagda’s army of merrows. But nobody else believes the ferocious sea creatures even exist. And how can he prove he’s right without any magic?

“As Fionn begins his search for the lost army, the other islanders prepare for invasion. The battle to save Arranmore has begun.”

You Won’t Believe This, by Adam Baron & Benji Davies

Second title from the author of Boy Underwater.

“Here’s something you won’t believe: someone is doing TERRIBLE things to Mrs Martin, Cymbeline Igloo’s favourite teacher of all time.

“Cymbeline has to find the culprit (after he’s learned what ‘culprit’ means). He’s also got to help his friend Veronique, whose grandma is dangerously ill. It seems Nanai has a secret, connected to her arrival in the UK as a Boat Person from Vietnam, a traumatic journey in which she lost her twin sister. Can Cymbeline figure out the mystery in time?

“One thing is for sure: even the most unexpected people can change your life in wonderful ways…”

My Parents Cancelled My Birthday!, by Jo Simmons & Nathan Reed

From the team behind [I Swapped My Brother on the Internet](https://suffolk.spydus.co.uk/cgi-bin/spydus.exe/ENQ/OPAC/BIBENQ?BRN=2302077).

“Tom can’t wait for his lucky birthday. It’s an epic family tradition and he’s dreamed up an unforgettable party! Only, after several disasters involving a flattened Chihuahua and a curse from the tooth fairy, it’s been CANCELLED.

“But Tom won’t give up. With the help of his friends (and a pig painted like a zebra), Tom decides to throw himself the party he deserves. What could possibly go wrong?”

“In solving the mystery of the Last Chance Hotel, Seth has discovered a bewildering new world of magic. But the truth about his mother’s fate remains, stolen away with the firefly cage by his nemesis, the wicked Tiffany Bunn. Determined to chase them down - and prove himself as a magician - Seth and his cat Nightshade are quickly embroiled in the latest MagiCon case, a murder investigation at a deserted lighthouse.”

“How did Neil Armstrong become the first person to set foot on the moon? Find out how this flight-obsessed astronaut went on to take one of the most momentous steps in history.”

First in a new Trailblazers series. Look out for Jane Goodall in September.

“This stunning lift-the-flap book takes the reader on a journey all around the globe and deep underground. There they’ll find amazing hidden worlds, teeming with life - from prairie dog towns and ant cities, to opal mines and treasure-filled tombs. Each spread is bursting with details and has new surprises to discover in the cutaway artwork and under the flaps.”

The Chimpanzee & Me, by Ben Garrod

“For over a decade, Ben Garrod has studied chimpanzees to find ways to protect and conserve them. We join Ben on a journey that has taken him around the world, studying eastern chimps in the humid forests of Uganda and the critically endangered western chimps of Liberia.

“In his trademark infectious, lighthearted style, Ben describes encounters with chimpanzees that highlight the different threats they face. From the illegal international pet trade, to bushmeat markets, and the effects of relentless habitat loss - not to mention how your new furniture, your toothpaste and even your mobile phone are all implicated in their falling numbers.”

“This publication is the must-have commemorative celebration of BTS, the Korean boy band with a global army of fans. With their talent, dedication, clever choreography, and catchy blend of pop, hip-hop and R&B, this fan book offers an extensive look at what makes the Bangtan Boys so memorable.”

What Are Feelings?, by Katie Daynes & Christine Pym

New in the Usborne Lift-the-flap questions and answers series.

“This thoughtful book explores happiness, sadness, anger, fear and worry in a friendly and approachable way. Adorable animal characters experience different emotions, while imaginative flaps answer important questions such as ‘Why don’t I feel happy all the time?’ and ‘How can I cheer up my friend?’.”