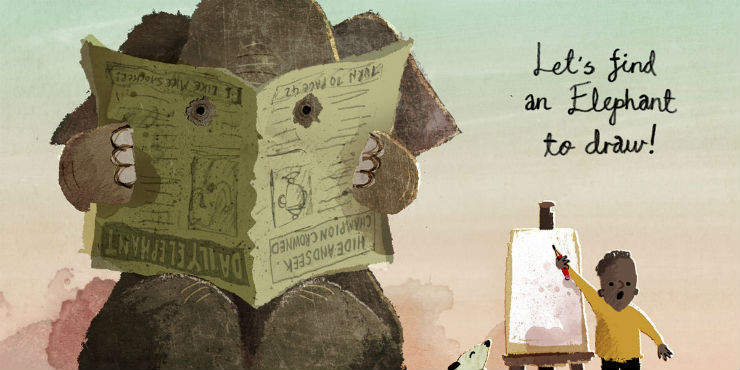 The snowball by Giuliano Ferri

This little board book is pleasing to read and beautifully produced. It’s a simple story about a little mouse who enlists the help of his friends, to roll a snowball up a hill. As they do so, the snowball and the die-cut hole in the book get bigger and bigger and bigger until at last.

An imaginative picture book, beautifully produced in muted tones on gorgeous thick paper. It’s a humorous modern take on a medieval bestiary. By the way, a ‘Zoomer’ is of course, a cross between a farmer and a zookeeper.

Have you seen elephant? by David Barrow

A beautiful picture book about a game of hide and seek, between a small boy and an elephant. The elephant is “very good” and I have to say, so is the book!

We were so pleased to see this pre-Christmas treat for Freedman fans. If you don’t borrow it from the library, you might want to buy it for someone’s stocking, assuming the stocking is a pillow case.

Rhyming, funny, gross, and with lots of visual details to amuse and disgust, it’s just the job.

A cute little baby wearing a woolly hat, bounces along with Santa in his sleigh. We’ve got a digital copy too of this sweet rhyming story, available as an eBook on Overdrive.

The person controller by David Baddiel

I’ve just started this and it’s brilliant, very funny, enlivened with sympathetic characters, wit by the spoonful and plenty of illustrations by Jim Field. But I can’t read anymore now because my laughter is annoying other people in the office, probably because they wish they were reading it instead of answering emails. Also available as an eBook on Overdrive.

Two brothers try to understand why their father ran away with them in the middle of the night. Their relationship is touching, the story is poignant and the armchair was their mum’s.

Meet Marius Myerdorf in this tale of “adventure, abduction, friendship and fearlessness”. This is the fourth gruesome title in the Tales from Schwartzgarten.

I totally funniest: a middle school story by James Patterson

Jamie Grimm finds fame on national TV for his stand-up comedy, but are his friendships at stake?

Third in the Secret Animal Society series comes this sweet little story about the family who run a sanctuary for dragons and the like. In good time for the season, this title includes flying reindeers and lots of snow.

A galaxy too far by Jamie Thomson

Did you read Wrong side of the galaxy about a boy called Harry Greene who gets abducted by aliens and carried off in their spaceship? This second instalment is just as fast paced and just as funny. Once you start to read, you more or less get abducted too, which is brilliant excuse not to clear the table or do the washing up.

A slice of the moon by Sandi Toksvig

This un-put-down-able story of a family, forced to emigrate to America during the Irish potato famine, is as inspiring as it is exciting. Slim, the heroine, has courage and determination running through her veins along with a capacity for story-telling fostered by her father. Despite dealing with prejudice, fear and the awful poverty faced by those who are forced to migrate across the world, this book is a super read to add to the growing list of Toksvig titles, and it’s all set for a sequel. If you can’t wait that long before reading another Toksvig tale, read Hitler’s Canary, whilst you’re waiting for the next instalment about Slim’s extraordinary life.

Latest adventure in the Hetty Feather series, this one weighs 700 grams, or more than 1.5 lbs. It’s got stars on the cover so it looks nice and Christmassy, but would cost loads to post!

Olga da Polga, the mischievous guinea pig, is back to delight a new generation of children in this gorgeous illustrated edition. It would make a super Christmas present, though rather heavy to post.

Goscinny and Uderzo produced the very first title about Asterix the Gaul, back in 1959. This is the 36th title in the series, and we know of several fans who will be very pleased to see it!

This book is soooo cool! If you’re got lots of relatives coming for Christmas and anticipate half the family may die of boredom before you get to Boxing day, this book is your answer. Subtitled “the ultimate book of randomly awesome trivia”, it’s just asking to be used for quizzes. I think I’m going to buy some for presents too.

What makes it rain? by Katie Dynes

A super little book, full of concise explanations for complex questions, such as; what makes the wind blow? What is a hailstone?. The very jolly illustrations and the board book format aim this at the younger end of our non-fiction readers, but the quality of the information would be useful through Key Stage 1.

All about chemistry by Robert Winston

It’s good to see a new edition of Robert Winston’s well illustrated book. It’s packed with information colourfully presented and is perfect for dipping into.

The boy at the top of the mountain by John Boyne

Following the death of his parents, a gentle quiet boy is sent to live with his aunt in a house at the top of an Austrian mountain. The house is Hitler’s and the boy is corrupted by power. This is a powerful and disturbing read.

Mooneboy: the fish detective by Chris O’Dowd and Nick Murphy

In good time for Christmas, comes this second title in the riotously funny series. Is it even funnier than his Blunder Years, or is that just my imagination?

Carry on: the rise and fall of Simon Snow by Rainbow Rowell

Simon Snow struggles at his last year at the Watford School of Magicks, since his personal life is in tatters.

Anything that isn’t this by Chris Priestley

Inspired by Chris Priestley’s memories of his teenage yearning to escape the mundanity of the lives around him. It’s a compelling read about a society which stifles ambition and imagination, about inter-generational alienation, and about love. His powerful black and white illustrations haunt the book, which Chris Riddell calls “an astonishing novel, beautiful to look at, thrilling to read”. I think we have a future classic right here, right now.