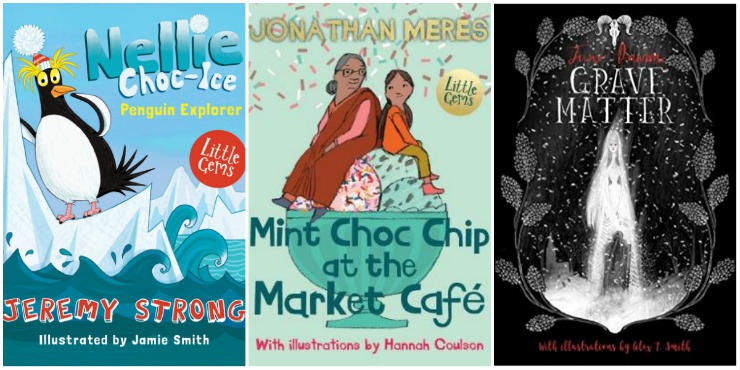 Publishers Barrington Stoke, who specialise in books for children with dyslexia and visual stress, have some brilliant titles coming out over the next couple of months. Their entertaining, age-appropriate books from top authors and illustrators feature thick, cream-coloured pages and a special font to help ‘break down the barriers that can stop kids getting into reading.’

You can find help and advice on selecting books on our Dyslexia and Irlen Syndrome page and the Barrington Stoke website.

“Plucky young penguin Nellie Choc-Ice goes on an epic adventure when her iceberg floats off to the North Pole. Nellie needs all her wits about her to outsmart a steady stream of hungry creatures who reckon she looks like a tasty treat. Will Nellie ever find her way home?”

“Priya loves helping out at the stall her family have run for donkey’s years. But one day she meets Stan. His dad sells everything from dog treats to fish tanks - just like the Sharma family! Priya is horrified, but Nana-ji is one hand to offer lessons on the balance sheet of life.”

“Jo-Jo’s mum and dad are arguing again - but this time it’s on Christmas Eve and Jo-Jo’s convinced it’s all his fault. He’s been spoiled, selfish and greedy - and his badness has actually killed Father Christmas.

“To make amends, Jo-Jo decides that he must be Father Christmas - and so he fills sacks with his old toys and puts on mum’s long red coat. But then a magical encounter with the real Father Christmas shows Jo-Jo that the true message of Christmas is the giving of love, not of gifts.”

Secret of the Stones, by Tony Bradman & Martin Remphry

“Maglos and his High Priest father control the access to the sacred site of Stonehenge where the worlds of the living and the dead meet twice a year. But times are, and when Maglos’s father dies in suspicious circumstances, his uncle makes Maglos his slave. Soon after two strangers arrive from distant lands. They teach Maglos the secrets of a new, strong metal which will soon be all important - the secret of the stones.”

Who’s a Big Bully Then?, by Michael Morpurgo & Joanna Carey

“How would you feel if you beat the school bully in a race? And he then wanted a fight? How would you cope? This text tells you what happens to Darren Bishop as he stands up to something bigger than him, namely Olly the bull.”

The Last Days of Archie Maxwell, by Annabel Pitcher

“Dads leave home all the time. It’s not that unusual, really. Leon’s dad walked out. So did Mo’s. But Archie’s? Well, that’s a different story - a story that Archie must keep secret at all cost. Archie knows he should accept Dad for who he is, so he hides his turmoil until he can stand it no longer. With nowhere else to turn, he finds himself at the railway track. The track has been calling to him, promising escape, release. The only problem is, it’s been calling to someone else too.”

“Since the car accident that resulted in the death of his girlfriend Eliza, Samuel is devastated and blames himself for the crash. He is drowning in grief and his overwhelming need to reunite with Eliza drives him to the forces of black magic, in a bid to bring her back to life. But he has difficult choices to make and the terrifying consequences of dark magic are about to raise their head.”