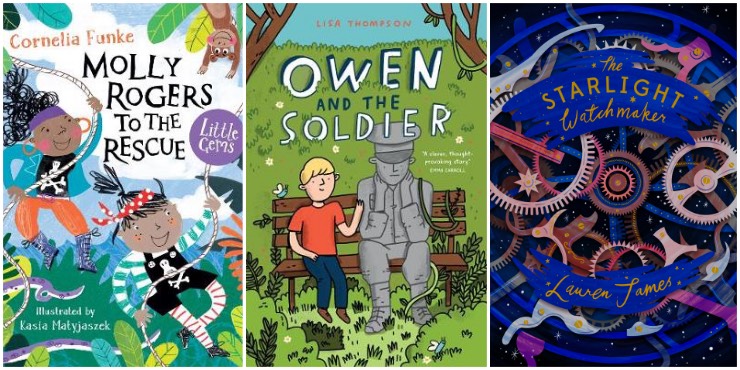 Barrington Stoke, who specialise in books for children with dyslexia and visual stress, have some more brilliant titles coming out in time for the Summer Reading Challenge.

Molly Rogers to the Rescue, by Cornelia Funke & Kasia Matyjaszek

“Thieves, greedy pirates and mischief-makers are no match for Molly Rogers!

“When Molly and her mother, Barbarous Bertha, discover that Captain Firebeard is destroying Monkey Skull Island in search of buried treasure, they set sail on the Red Swallow to save the island and its animals from his clutches. But Firebeard will stop at nothing to get his treasure - how will Molly outwit him this time?”

Owen and the Soldier, by Lisa Thompson & Mike Lowery

” A crumbling stone soldier sits on a bench in the park. Only Owen understands how important he is.

“At home, Owen and his mum are struggling and there’s nobody he can talk to. Hidden away in the park, Owen feels free to be himself. When the war-weary soldier is listening, his worries slip away. But nobody else cares about the soldier, and the town council want to tear him down. Owen’s the only one who can save him but can he find the courage to speak up before it’s too late?”

“Jim and his family have halted by Dundray and the education people have been round mouthing the law. In school the Traveller kids suffer at the hands of teachers and other pupils alike, called ‘tinker-stinkers’, ‘dirty gyps’ and worse. Then the punches start.

“The only friendly face is Kit, a settle girl who takes Jim under her wing and teaches him to read in the great cathedral chamber in the cave below the town.”

“Sports Day is coming up soon and Suzi’s in a great mood - until her class get saddled with mean old Miss Grit as their supply teacher. Miss Grit has it in for Suzi from day one, and worst of all, Suzi’s rival Barbie Meek is Miss Grit’s class favourite!

“The terrible duo are about to turn Suzi’s life into a nightmare… will she even make it to Sports Day for her chance to win the race?”

“Scott is an orphan, roaming the streets in search of food like so many other children. When the opportunity to become a games tester for Vince Power and his Virtual Kombat video games comes along, he leaps at the chance. But Scott’s about to find out that there’s nothing virtual about the danger in these games…”

“Bobbie is thrilled that a golden eagle has settled in the forest near her family’s farm. She loves to walk the hills with her granny and watch the bird soar through the sky.

“But not everyone shares Bobbie’s awe for the spectacular bird. When her granny’s beloved dog is killed by poisoned bait, it soon becomes clear that someone is out to get the eagle - and they’re ready to take down anything, and anyone, that gets in their way. Bobbie is determined to save the eagle, but is it worth the risk?”

Because of You, by Eve Ainsworth

“Poppy’s life has turned into a nightmare. Mum’s new boyfriend is moving in, along with his daughter, Kayleigh - the most popular girl in school. Poppy’s dad is never around and appears to be drifting further and further away. And when it seems like things can’t get any worse, Poppy becomes the target of the spiteful school bullies.”

What Magic Is This?, by Holly Bourne

“Sophia, Mia and Alexis are clinging on to a spark of hope that maybe - just maybe - they’re special. But could they really be witches with the power to cast life-changing spells?”

The Starlight Watchmaker, by Lauren James

“At an elite academy, attended by the wealthiest students in the galaxy, Hugo works as a watchmaker in a dusty attic room. But he is one of the lucky ones. Many androids like him are jobless and homeless.

“A privileged student like Dorian could never understand their struggle - or so Hugo thinks when the pompous duke comes knocking at his door with a broken time-travel watch.”

Looking for even more super-readable books from famous authors? Bloomsbury have recently published J. K. Rowling’s Fantastic Beasts and Where to Find Them, Quidditch Through the Ages and The Tales of Beedle the Bard in dyslexic-friendly format.