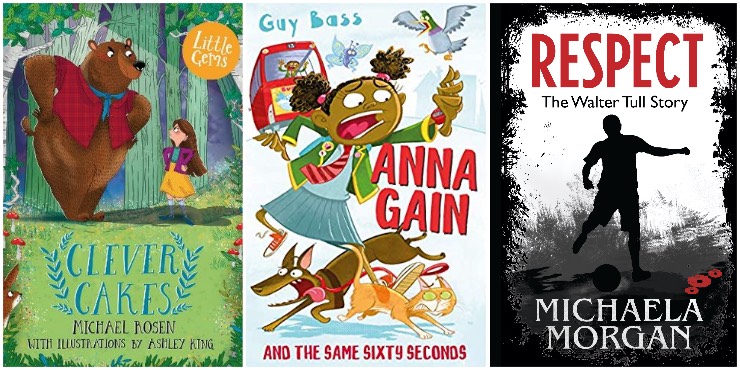 Barrington Stoke, who specialise in books for children with dyslexia and visual stress, have some more brilliant titles coming out for 2020.

“Everyone in Jack’s class has a pet, but all Jack has is his little brother Freddie. And little brother’ don’t make very good pets. But when Jack meets The Man With The Top Hat and his lovely cat Mrs Wilson, he’s about to get the pet he’s always wanted - and many, many more.”

“In stories, as in life, it pays to be able to think on your feet - especially if you’re about to be eaten by a hungry bear. That’s just one of the perils that face the clever children in these 7 tricksy tales.”

Anna Gain and the Same Sixty Seconds, by Guy Bass & Steve May

“It’s Halloween night and the streets are full of witches, ghouls and tricks - but the biggest surprise of all falls from the sky into Ali’s treat bucket. It’s a cat. It’s Magicat! Knocked off his witch’s broom by a rogue firework, Magicat is stuck far from his home in Magic Land - and now he has to wait, disguised as a normal cat, for Wenna Witch to come and get him! Luckily Jessie and Ali are here to help him out - but while they wait, what could be the harm in letting Magicat do just a little bit of magic?”

Star for a Day, by Jean Ure & Charlie Alder

“Lucy has lived her entire life in her sister’s shadow - Lola is always the centre of attention and constantly in need of new clothes for a party or kit for her dancing, meaning Lucy often goes without. But when a talent show comes to town, an unlikely ally helps Lucy step into the spotlight for once. Will Lucy discover her own star quality?”

“The monster Grendel has awoken and the townspeople are terrified. Even the King has abandoned his great Hall. Hero after hero comes to slay the monster, but no one outwit Grendel. Only Beowulf has a chance. But when Beowulf finally triumphs, an even greater horror awakens. Grendel’s mother, the Hag, wants revenge on the slayer of her son.”

“It’s Ella’s first day at her new school and that can only mean one thing: making new friends. When she stumbles across the book ‘Five ways to make a friend’ in the library, it’s like all her prayers have been answered. With five excellent ideas up her sleeve, Ella will be friends with the girls in no time - right?”

A Bad Day for Jayden, by Tony Bradman & Tania Rex

“Mum won’t get out of bed. His best friend has dumped him. And school work is just too difficult. Jayden wants to do the right thing - but how can he when it feels like the world is conspiring against him?

“Everything is going wrong, and when a supply teacher turns up to take his class, Jayden’s sure things will keep on getting worse. But Mrs Wilson is not quite the teacher Jayden expected - can she help turn his bad day around?”

The Girl with the Sunshine Smile, by Karen McCombie & Cathy Brett

“Meg is the girl with the sunshine smile. That’s what they call her at the wedding fairs where she models her mum’s dresses. But then Mum meets Danny. Danny, with the grotty houseboat, four sons, and a three-legged cat. All of a sudden, Meg’s life clouds over. Will Meg ever find her sunshine smile again?”

“This title tells the story of Walter Tull, a top-level footballing star and the first black officer in the Army in the First World War.”

“Poignantly and powerfully retold, Jane Eyre is the tale of a spirited heroines’s search for love, independence and belonging.”