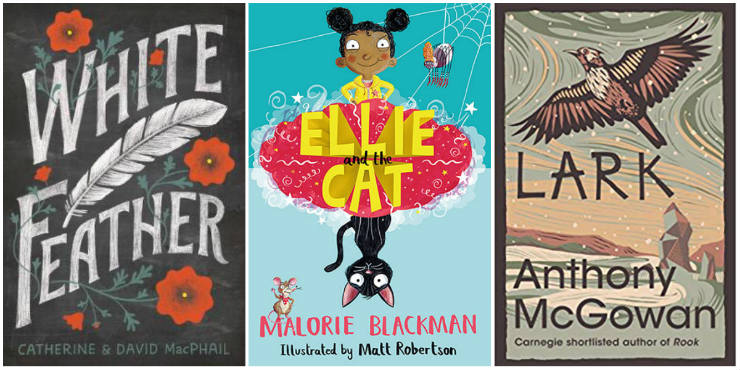 “Laura Norder lives her life by the Golden Rules and so should everybody else. But being Sheriff of Butts Canyon at the age of ten is a big job to handle, and when a no-good rule-breaking bandit causes chaos in the town, enough is enough! It’s time for Laura to step up to the plate and catch the masked mischief-maker before he breaks any more of her rules!”

Under the Skin, by Catherine MacPhail & Tom Percival

“At last Omar’s family have a safe place to live. But life isn’t easy. Sam’s always there - in Omar’s estate, in his class and in his face. Sam wants to push Omar around. But Omar’s pushing back.”

“Chichico is thrilled when a talent scout spots him during a kick-about with his friends Davil and Ana, and he is asked to try out for Santos Brazil. But without a pair of football boots, how will Chichico ever be taken seriously?”

“The night Dot and Ryan take a sneaky Halloween visit to a condemned tower, they discover more than they bargained for when they catch a glimpse of an endangered species of bat. It’s clear that the bat colony and the tower need to be saved, but Dot and Ryan were never meant to be there and it’s not going to be easy to get the grown-ups on side…”

Ellie and the Cat, by Malorie Blackman & Matt Robertson

“Ellie is the rudest, most spoilt child her grandma has ever met. So Grandma decides to teach her a lesson and switches Ellie’s body with Jolly the cat’s. As she starts to make friends with the other animals in the house, the mice and the spiders, Ellie starts to learn how to be a good friend.”

“In Gamer, Scott escaped ‘Virtual Kombat’ - the all-too-real virtual reality game in which Vince Power risks the lives of street kids for profit. Scott’s now on the run and comes across a gang of techno-hackers who share his wish to destroy VK. They’ve developed a virus that could do the job, but in order to implant it Scott has to re-enter the arena and risk being trapped inside the game forever.”

The Dog That Saved Christmas, by Nicola Davies & Mike Byrne

“Jake is different from the other kids at school. He struggles when routines change and people’s emotions are so hard to understand. Christmas can be even worse and often the festivities are just too much to bear. But when Jake finds a little dog lost in the street he unlocks a connection he’s never had before.”

“The war is won but for Charlie there is little to celebrate. His brother never returned from no man’s land and has died not as a hero but executed as a coward. Refusing to believe that his brother was a traitor, a grief stricken Charlie is pushed to the edge in his dark quest to uncover the horrifying truth.”

Conclusion of the quartet which began with Brock, Pike and the Carnegie-shortlisted Rook. All four stories have been collected together as The Truth of Things.

“Things are tense at home for Nicky and Kenny. Their mum’s coming to visit and it will be the first time they’ve seen her in years. A lot has changed since they were little and Nicky’s not so sure he’s ready to see her again.

“When they head for a trek across the moors to take their minds off everything, a series of unforeseen circumstances leaves the brothers in a vulnerable and very dangerous position. There might even be a chance that this time not everyone will make it home alive…”