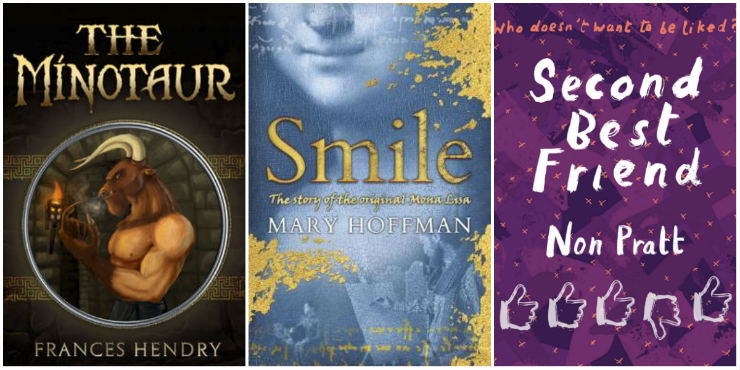 Publishers Barrington Stoke, who specialise in books for children with dyslexia and visual stress, have some brilliant titles coming out over December 2017 and January 2018. Their entertaining, age-appropriate books from top authors and illustrators feature thick, cream-coloured pages and a special font to help ‘break down the barriers that can stop kids getting into reading.’

You can find help and advice on selecting books on our Dyslexia and Irlen Syndrome page and the Barrington Stoke website.

“The minotaur - half man, half bull - stalks the Labyrinth, waiting for the next victim from Athens, sent down to him by the Cretans. Theseus, son of the Athenian king, is fed up with the sacrifice of his people and vows to get into the Labyrinth and kill the minotaur. But will he survive the fight?”

“Dilly’s got a wart. A big, hard, knobbly wart, right on his knee. Soon he’s ‘Wartman’, and everyone’s laughing at him. Dilly doesn’t know what to do - until he meets old Mr Ben, and everything changes.”

“Leny has spent most of his life at the zebra crossing, and for many of those years Otis, the singing ‘zebra man’ has helped him on his way. But when Otis’ sad past comes back to haunt him, Lenny is forced to face his crossroads alone. Only by examining the memories of their friendship can Lenny discover the truth.”

Smile: the story of the original Mona Lisa, by Mary Hoffman

“Renaissance Italy is a world or riches open to any man who dares to conquer it. In the life of young Lisa the doors to this world remain closed. Promised in her youth to a widower as a loving wife and mother, she is resigned to an unremarkable existence clinging only to the memory of being ‘Lovely Lisa’ to the now great Leonardo Da Vinci. But when their paths cross again her portrait will become his masterpiece and her smile will capture the imagination of the world.”

“Jade and Becky have always been best friends; inseparable and often indistinguishable. But when a spiteful comment from an awful ex pushes Jade to the edge, she begins to see that she has always been second best in everything. When the school election offers her a chance to finally be number one, Jade learns just how far she is willing to go to be better than her closest friend.”