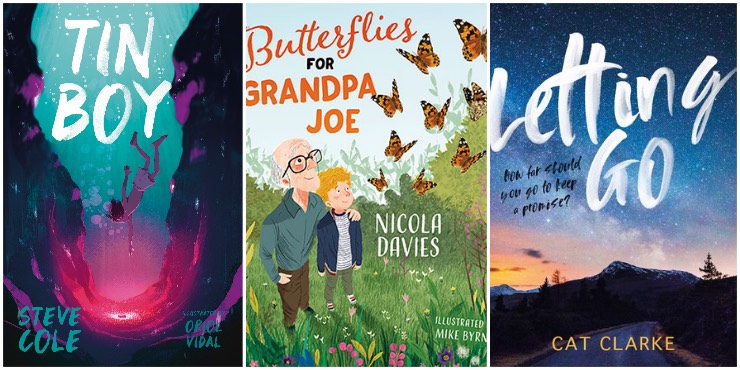 Barrington Stoke, who specialise in books for children with dyslexia and visual stress, have some more brilliant titles coming out as we move into the new school year.

The Bakery of Happiness, by Ian Beck

“Paul du Pain’s bakery is a very special place. Each day, Paul bakes the bread while Marie serves customers in the shop. Everyone who walks in the door walks back out feeling happier than before. But when Marie goes away, Paul’s days become sad and grey. Without her, the bakery’s magic is gone. Will Paul ever be able to win her back?”

“Scratching kids and maddened mums wage war on some very nasty nits in this hilarious rhyming story. The rollicking text begs to be read aloud – a delightfully itchy comedy with added resonance for any family dealing with one of childhood’s scratchier issues!”

“Grandpa Joe is butterfly bonkers. There’s nothing he loves more than photographing the fluttering, colourful creatures in his garden.

“But since Ben’s granny passed away, Grandpa Joe has changed. He doesn’t want to go outside or talk or smile. It’s like he’s a completely different person and it feels like time is running out to help him.

“If only Ben could find a way to bring the butterflies to his Grandpa. Maybe seeing them again could help bring back his smile.”

Sophie Takes to the Sky, by Katherine Woodfine & Briony May Smith

“Scardy-Cat Sophie is afraid of everything! So when a balloonist comes to the town fair, Sophie is left behind while everyone else goes to watch him fly in his marvellous balloon. She’s far too frightened of the crowds, the commotion and even riding in a horse-drawn carriage.”

A Most Peculiar Toy Factory, by Alex Bell & Nan Lawson

“But five years after shutting its doors, the toy factory is opening again, and Tess Pipps has found herself a job there. As she and her siblings start their first day of work, they are about to discover what dark secrets are lurking inside the factory’s walls.”

“Alice Peasbody has no nose. People point and stare. Only the birds in the garden are Alice’s friends. She tries to hide away, but it’s hard to hide a pancake face for ever…”

“A ghostly voice promises to help Karam, a new immigrant to the UK, deal with the bully at school. But there is a price to pay in this chilling thriller that’s not for the faint-hearted…”

“Mining for tin in deep, dangerous trenches is the only life that Tono has ever known. Worked to the brink of exhaustion each day, his only escape is in the precious moments when he reads his dad’s old comics. In a world of heroes and superpowers, he can forget the terrifying mining pits. But an underwater avalanche, a glimpse of something bright red in the sandy seabed, and a canny sidekick are about to transform Tono’s life forever…”

“Jake and the other finalists in a writing competition have been invited to a stately house for a tour like no other. As their guide leads them through grand rooms, hidden nooks, and magnificent grounds, they hear the stories of seven ghosts who haunt the halls. But strange shapes and shadows follow Jake as he journeys through the house and with each tale that Jake hears, he begins to feel more uneasy. All is not as it seems and soon Jake will discover that something is very, very wrong.”

“Summer, 1939. Krystyna Tomiak has been called up to join the White Eagles, Poland’s valiant air force. After years of flight training she is ready to prove herself as a liaison pilot. But as the German forces gather at the border, Poland teeters on the brink of a ravaging war. When the invasion hits too close to home and Krystyna is left with just her plane and the clothes on her back, will she be able to navigate the most challenging flight of her life?”

“When Agnes made a promise to her girlfriend Ellie, she thought that they would be together forever. One year later, Agnes is keeping that promise and it’s put her in a situation she never could have predicted; climbing a desolate mountain, in miserable weather, with Ellie and her new boyfriend Steve. But when the weather takes a frightening turn and the sky-high tension between the trio hits its peak, Agnes will have to push herself further than she ever thought was possible.”

Conclusion of the Virtual Kombat trilogy.

“Scott and his gang of techno-hackers might have destroyed the deadly online game Virtual Kombat, but they’re far from safe.

“No longer hosted in virtual reality, there’s only one place for the brutal battle to go – VK will be played in the real world, and Scott’s tech skills won’t help him now.

“This is no longer just a game…”