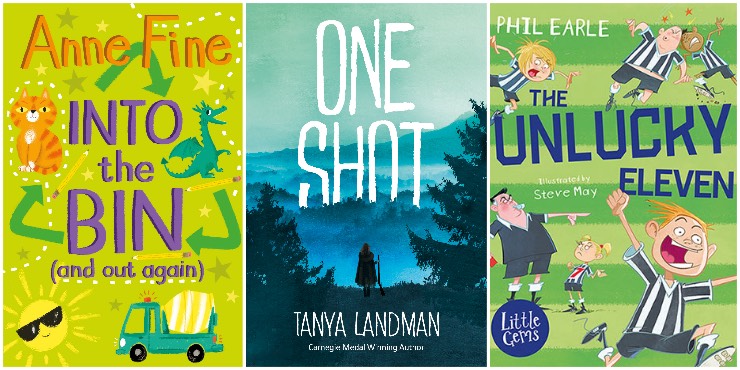 “After a toad lands on his head as he leaves his house one morning, Leo is determined to find out where it has come from and why. Together with his friend Rosa, he needs to come up with some answers before the angry residents of Upper Dab take matters into their own hands and the toads become toast!”

“Everyone knows Cinderella’s story, but what about the ugly stepsisters? Angula and Lardine think they should get the prince, the money and the fame - and will stop at nothing to get them. But will they live happily ever after?”

“Sandie has been battling it since her childhood; the hulking, snarling black dog of her nightmares. Although her precious pet dog Rabbie may have fought back against this monster for years, when he is no longer there to protect her the black dog will return and Sandie’s nightmare will come back to haunt her.”

One Shot, by Tanya Landman

“After the death of her beloved father, Maggie and her family are thrown into a life of destitution. With little income and no way to live off their poor land, Maggie tries to provide for her family the way her father always had - with his hunting rifle and whatever animals the forest would provide.

“But when her mother is confronted with her ‘unladylike’ behaviour, Maggie is thrown into a life of unthinkable cruelty and abuse. With no one to care for her and only the hope of escape, all Maggie can do is survive.”

Into the Bin (and out again), by Anne Fine & Vicki Gausden

“Mr Frost’s classroom is always in a mess, and now his class are on a mission to send all the things they don’t need off to a charity shop - including the rubbish bin that falls over at the slightest touch!

“From books to old toys, they bring in all sorts of items to send away in the bin, but little do they know that what one person doesn’t want might be just the thing someone else has been looking for.”

The Unlucky Eleven, by Phil Earle & Steve May

“Ridiculous injuries… strange illnesses… cancelled games… Everything’s going wrong for the Saints this season, and Stanley’s team-mates believe they finally know why. Their football kit is cursed! But the team’s attempts to break the curse take things from bad to worse. Soon, they’re ready to call it quits.

“Stanley’s still got some tricks up his sleeve… but will his curse-cracking ideas save the team in time for the last game of the season?”

The Case of the Vanishing Granny, by Alexander McCall Smith & Sam Usher

“Billy, Fern and Joe Shortbread are the stars of their family circus, but they also have another talent - they are experts at solving mysteries!

“When their circus moves into a new town they soon make friends with a young boy named Tom. But Tom can’t enjoy the circus because his granny has disappeared and he’s worried he’ll never see her again.”

The Disconnect, by Keren David

“Could you disconnect from your phone for six weeks? An eccentric entrepreneur has challenged Esther’s year group to do just that, and the winners will walk away with £1,000. For Esther, whose dad, sister and baby nephew live thousands of miles away in New York, the prize might be her only chance to afford flights for a visit.”