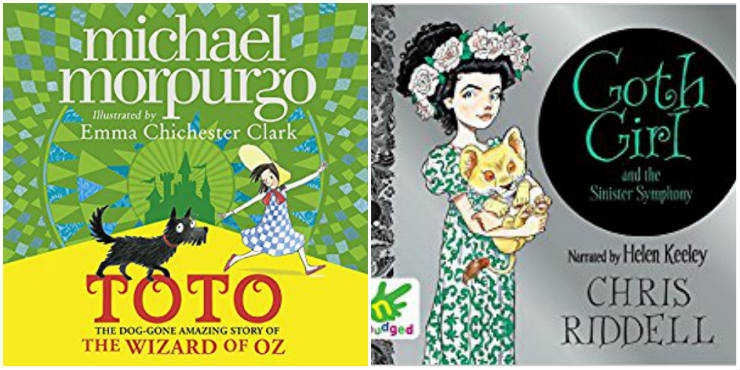 Toto: the dog-gone amazing story of the Wizard of Oz, by Michael Morpurgo, read by Christopher Ragland

“‘I was there,’ Papa Toto said, and those magic words sent shivers down my spine. It was going to be the Wizard story. ‘Dorothy and me were both there.’ We were all silent, snuggled up together, waiting, waiting.

“Dylan Malone, aka Beaky, has a habit for telling porkies - every time he opens his mouth, out pops a whopper. But then his long-suffering sister shoves him into the truth-telling machine at Madame Shirley’s Marvellous Emporium of Peculiarities. Now Beaky can’t tell a lie - not even a teeny-weeny one - and a truth-telling Beaky is even worse.”

Harper and the Night Forest, by written and read by Cerrie Burnell

“Harper and her friends get to visit the mysterious Night Forest, and it is rumoured that a magical Ice Raven lives amongst the ebony trees. Will the children try to capture it? Or give it freedom?”

“Miranda has a big imagination, and always wins Word of the Day at school. When her sister Gemma is taken into hospital, Miranda escapes into her own fantasy land, Magnanimous. With giraffe police, ham sandwich trees and a Crystal-Clear Glass Hospital for Getting-Better Children, Magnanimous grows and grows.

“As her sister gets worse, things Miranda writes seem to trigger small miracles she has been asking for: her gran stops smoking and horrible Darren Hoey is nice to her! Can Miranda write a miracle for her sister?”

A Home for Molly, by Holly Webb, read by Victoria Fox

“On holiday at the seaside, Anya is excited when she meets a friendly family with children her own age - playing with them and their gorgeous puppy, Molly, is so much fun!

“But when she returns to the beach the next day, she discovers the pup all on its own. Anya sets out to look for her owners, but when she eventually tracks down the family, they’re very surprised. Molly isn’t their dog - they thought she belonged to Anya! With her holiday drawing to a close, can Anya find Molly’s real owners?”

Goth Girl and the Sinister Symphony, by Chris Riddell, read by Helen Keeley

“Lord Goth is throwing a music festival at Ghastly-Gorm Hall, with performances from the finest composers in the land. Ada can’t wait, but it’s quite distracting when her grandmother is trying to find her father a fashionable new wife, there’s a faun living in her wardrobe and Maltravers is up to his old tricks. Ada must make sure everything goes to plan, and luckily help is at hand from a very interesting house guest.”

A Twist of Tales, by Julia Donaldson, read by Helen Keeley

“In this fantastical collection of stories, a king hides a terrible secret under his crown, a marvellous dream inspires an epic journey and a clever girl outwits the king!

“This collection of three lovely tales from Julia Donaldson are an ideal first step for children embarking on a lifelong journey through the wonders of stories.”

“Freddie is an ordinary boy who joins the circus one day. He can’t believe his luck as he is asked to understudy some of the acts. But is he brave enough to go into the lions’ cage?”

“A magical storyteller’s timeless tales. Here are 16 of Andersen’s classic stories translated in the 19th century. Included are such well-known tales as ‘Thumbelina’, ‘The Little Mermaid’ and ‘The Brave Tin Soldier.’”

Montmorency and the Assassins, by Eleanor Updale, read by John Sessions

“The 19th century draws to an agonised end. A terrorist plot threatens Europe and Montmorency and his friends must fight it undercover. But with loyalties divided and convictions tested, how can they know who to trust?”

The Eagle of the Ninth, by Rosemary Sutcliff, read by various

“Around 117 AD the Roman Ninth Legion was ordered to put down an uprising among the Caledonian tribes. Four thousand men vanished without a trace into the swirling mists of the north of Roman Britain. Many years after their disappearance, a young centurion, Marcus Aquila, sets out to discover the truth about what happened to the legion and to its First Cohort Commander—his father.”

A Living Nightmare, by Darren Shan, read by Ralph Lister

“Darren Shan and his best friend, Steve, get tickets to the Cirque du Freak, a wonderfully gothic freak show featuring weird, frightening half-human-half-animals who interact terrifyingly with the audience. In the midst of the excitement, true terror raises its head when Steve recognizes that one of the performers — Mr. Crepsley — is a vampire!

“Steve confronts the vampire after the show finishes — but his motives are surprising! In the shadows of a crumbling theater, a horrified Darren eavesdrops on his friend and the vampire, and is witness to a monstrous, disturbing plea. As if by destiny, Darren is pulled to Mr. Crepsley and what follows is his horrifying descent into the dark and bloody world of vampires.”

“Since his father died, Charlie Bone has lived with his mother and her mother in the house of his other grandmother, Grandma Bone. Looking at a picture of a couple with a baby and a cat, he suddenly discovers he can hear their voices.

“Although he tries to hide his new gift, Grandma Bone and her scary sisters soon find out and send him to Bloor’s Academy. Charlie quickly finds life at Bloor’s pretty tough, with its strict rules and the malevolent head boy, Manfred, set against him.

“When Charlie discovers that the child in the photograph is being held, hypnotised, against her will, he and his new friends with ‘gifts’ try to awaken her. But can they overcome Manfred’s sinister hypnotic gifts?”

Charlie Bone and the Time Twister, by Jenny Nimmo, read by Joe Coen

“January 1916. On the coldest night in memory, Henry Yewbeam’s cousin Zeke tricks him into using the Time Twister, a beautiful marble full of shining colours that draws him into the future.

“January 2002. Charlie meets Henry reappearing at Bloor’s in the 21st century, and realises Henry’s cousin is none other than old Ezekiel Bloor. Charlie and Fidelio are joined by Cook and the Flames in their attempts to hide Henry from Ezekiel’s spies. But Charlie must soon enter the portrait of Skarpo the sorceror and retrieve the wand of a Welsh wizard.”