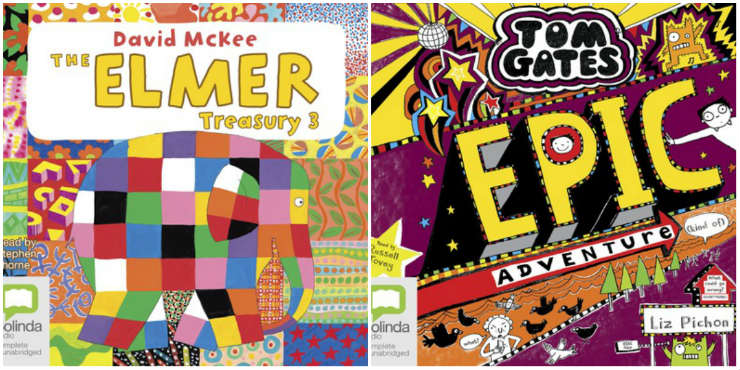 “You are about to read the true story of Father Christmas. It is a story that proves that nothing is impossible. If you are one of those people who believe that some things are impossible, you should put this book down right away. It is most certainly not for you. Because this book is full of impossible things. Are you still reading? Good. Then let us begin. A tale of adventure, snow, kidnapping, elves, more snow, and an 11-year-old boy called Nikolas, who isn’t afraid to believe in magic…”

The Secrets of the Superglue Sisters, by Susie Day, read by Charlie Sanderson

“Best friends Georgie and Jem aren’t just new at school; they’re new at being full-time sisters too. Georgie’s mum and Jem’s dad have finally bought a house together, and they get to share a home at last, just like they always wanted.

“School is a bit more challenging. Miss Eagle wants the whole class to start a self-esteem project. They’ll write their biggest secret on a piece of paper shaped like a cloud and then float them up into the sky on a balloon and their worries will disappear. Then disaster - the ball of secrets disappears! Soon everyone’s deepest secrets are being revealed to the whole school.”

Ten more stories about the gang of hilariously horrible kids.

The Vile Village, by Lemony Snicket, read by Tim Curry

The seventh book in the A Series of Unfortunate Events series features “such unpleasant matters as migrating crows, an angry mob, a newspaper headline, the Deluxe Cell, and some very strange hats.”

The Wishing Spell, written and read by Chris Colfer

“Alex and Conner Bailey’s world is about to change, in this fast-paced adventure that uniquely combines our modern day world with the enchanting realm of classic fairytales.

“Through the mysterious powers of a cherished book of stories, Alex and Conner leave their world behind and find themselves in a foreign land full of wonder and magic where they come face-to-face with the fairy tale characters they grew up reading about. But after a series of encounters with witches, wolves, goblins, and trolls alike, getting back home is going to be harder than they thought.”

“When Marilla and Matthew Cuthbert of Green Gables send for a boy orphan to help them out at their farm, they mistakenly get Anne Shirley, a feisty, independent but warm-hearted 11-year-old girl. Fortunately her sunny nature and quirky imagination win the hearts of her reluctant foster parents and everyone in the community. But not a day goes by without some memorable adventure or prank in the tragicomedy of her life. Early on she accidentally dyes her “cursed” red hair green. Later, in an effort to impress a neighbor she bakes a cake, but with liniment instead of vanilla.”

Fantastic Beasts and Where to Find Them, by Newt Scamander & J. K. Rowling, read by Eddie Redmayne

“A set textbook at Hogwarts School of Witchcraft and Wizardry since publication, Newt Scamander’s masterpiece has entertained wizarding families through the generations. Fantastic Beasts and Where to Find Them is an indispensable introduction to the magical beasts of the wizarding world.

“Scamander’s years of travel and research have created a tome of unparalleled importance. Some of the beasts will be familiar to readers of the Harry Potter books – the Hippogriff, the Basilisk, the Hungarian Horntail … others will surprise even the most ardent amateur Magizoologist.”

“Talking dogs. Mischievous wizards. An evil stepstepfather. Loads and loads of toads. Such is the life of a Frogkisser.

“Princess Anya needs to see a wizard about a frog. It’s not her frog, it’s her sister’s. And it’s not a frog, it’s actually a prince. A prince who was once in love with Anya’s sister, but has now been turned into a frog by their evil stepstepfather. And Anya has made a ‘sister promise’ that she will find a way to return Prince Denholm to human form …

“So begins an exciting, hilarious, irreverent quest through the Kingdom of Trallonia and out the other side, in a fantastical tale for all ages, full of laughs and danger, surprises and delights, and an immense population of frogs.”

“The 13th hilarious audiobook in the ever-popular Tom Gates series!

“Having two sets of grandparents is turning out to be VERY GOOD for me.

“The wrinklies are KEEN on giving presents AND they’re planning a FAMILY OUTING too, which is going to be EPIC.

“I can always ignore her.”

“Welcome to the world of Nocturnia, where darkness reigns supreme, glitter is terrifying and unicorns are the stuff of nightmares! Amelia Fang would much rather hang out with her pet pumpkin Squashy and her friends Florence the yeti (DON’T CALL HER BEAST!) and Grimaldi the reaper than dance at her parents’ annual Barbaric Ball.

“And when the King’s spoiled son Tangine captures Squashy, Amelia and her friends must escape the party to plan a daring rescue! In their race against time, they begin to realise things in Nocturnia may not be quite what they seem …

“Join Amelia on her very first adventure. She won’t bite!”

The Wizards of Once, by Cressida Cowell, read by David Tennant

“This is the story of a young boy Wizard and a young girl Warrior who have been taught since birth to hate each other like poison; and the thrilling tale of what happens when their two worlds collide.

“In this whirlwind adventure, Xar and Wish must forget their differences if they’re going to make it to the dungeons at Warrior Fort, where something that has been sleeping for hundreds of years is stirring…”

In the 11th and 12th books in the Dork Diaries series, Nikki Maxwell is on an exchange week at North Hampton Hills, her arch nemesis MacKenzie Hollister’s new school. Nikki and MacKenzie find themselves having to work together against Tiffany, a queen bee even meaner than MacKenzie.

The Princess and the Suffragette, by Holly Webb, read by Amy Enticknap

“It is 1913, nine years after the end of A Little Princess saw Sara Crewe escape Miss Minchin’s orphanage.

“Lottie, the smallest girl from the original story, learns about the Suffragette movement from Sara, who returns to visit from time to time. Soon Lottie finds herself sneaking out of the orphanage to attend a demonstration, in defiance of her cold, distant father. A father who has a secret to hide about her own missing mother …

“A story about lost mothers turning up in unexpected situations, the power of friendship and female empowerment.”

“Join Winnie and Wilbur on their wild and wacky adventures. From going back to the time of the dinosaurs to saving school children from slavery in ancient Egypt, from organising a treasure hunt for a pirate to rustling up some batburgers in the kitchen, this collection will keep young listeners entertained for hours!”

“A pilot stranded in the desert awakes one morning to see, standing before him, the most extraordinary little fellow. ‘Please,’ asks the stranger, ‘draw me a sheep.’ And the pilot realises that when life’s events are too difficult to understand, there is no choice but to succumb to their mysteries. He pulls out pencil and paper…

“And thus begins this wise and enchanting fable that, in teaching the secret of what is really important in life, has changed forever the world for its readers.”

The Elmer Treasury 3, by David McKee, read by Stephen Thorne

A modern classic, Elmer the colourful patchwork elephant has been a nursery favourite since his creation in 1989 and has sold over four million copies around the world. Elmer is not your normal grey elephant – his colourful exuberance cannot be contained for long! With his trademark cheeky humour, Elmer shows us that it’s OK to be different.”