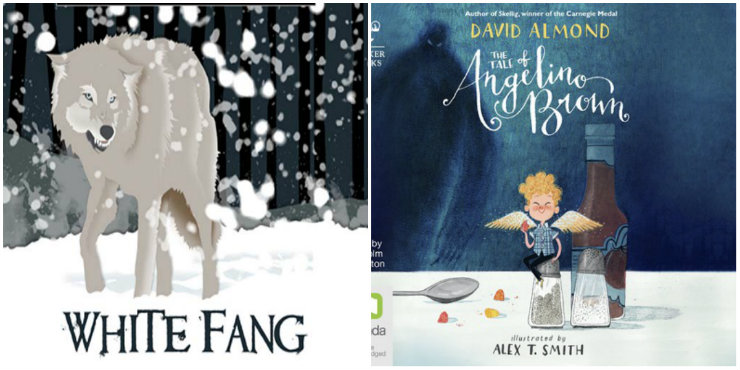 The Everything Machine, by Ally Kennen, read by Joe Coen

“Eleven-year-old Olly has a very special delivery - a 3D printing machine, stamped with PROPERTY OF M.O.D and BRITISH SPACE AGENCY. WARNING. DO NOT TAMPER, which has magical powers. It has a name, it speaks, and it can print ANYTHING Olly asks it to - a never-ending supply of sweets, a swimming pool in the shed - but what Olly really wants is his dad, who has separated from his mum and moved out of the family home. Cue the creation of Dad-Bot - he looks just like Dad (on a good day) but is totally chaotic - and his antics tip Olly and co into a heart-racing and heart-warming adventure!”

The Secret Kitten, by Holly Webb, read by Victoria Fox

“Lucy can’t help but feel lonely when she and her brother move in with their gran, leaving behind their old school and friends. Lucy wishes she could have a pet, but Gran isn’t keen on animals. A black and white stray kitten catches Lucy’s attention, and she instantly falls in love with it. But she is upset when she reads in a magazine that the kitten’s colour will make it difficult to rehome. Too young to look after herself, where will the kitten go if she can’t find anyone to take her in?”

“It’s a stormy night in 1816 when there’s a knock at the door of Villa Diodati. Lying in the rain is a dead girl, and with her, lots of questions. Like, why did she come? What was she looking for? And who was she running from?”

Attack of the Alien Dung!, by Gareth P. Jones, read by David Thorpe

“Biskit works alone. So when the unruly Pet Defenders canine agent is teamed up with Mitzy - a rookie and, even worse, a cat - he’s not happy. Can Biskit put his ego aside and join forces with Mitzy to save the world from an alien attack of terrifying proportions?”

“In the desolate, frozen wilds of northwest Canada, a wolf cub finds himself the sole survivor of his litter. Son of Kiche, half-wolf, half-dog, and the ageing wolf One Eye, he is thrust into a savage world where each day renews the struggle of survival. It is a lonely but noble life—until the day he is captured by dog-driving men. The cruel mistreatment he bears in this new life of slavery teaches him to hate.

“Only one man sees beyond the rage of White Fang to his intelligence and dignity. Only one has the courage to offer the killer a new life. But can his kindness reach the heart of White Fang?”

“Just when you think you’ve saved the world…

"”You will kill her?” the Torment asked. Skulduggery sagged. “Yes.” He hesitated, then took his gun from his jacket. “I’m sorry, Valkyrie,” he said softly. “Don’t talk to me,” Valkyrie said. “Just do what you have to do.” Valkyrie parted her tunic, and Skulduggery pointed the gun at the vest beneath. “Please forgive me,” Skulduggery said, then aimed the gun at the girl and pulled the trigger.

“With Serpine dead, the world is safe once more. At least, that’s what Valkyrie and Skulduggery think, until the notorious Baron Vengeous makes a bloody escape from prison, and dead bodies and vampires start showing up all over Ireland. With Baron Vengeous after the deadly armour of Lord Vile, and pretty much everyone out to kill Valkyrie, the daring detective duo face their biggest challenge yet. But what if the greatest threat to Valkyrie is just a little closer to home?”

The Tale of Angelino Brown, by David Almond, read by Malcolm Hamilton

“Bert and Betty Brown have got themselves a little angel. Bert found him in his top pocket when he was driving his bus.

“Bert and Betty’s friends think he’s lovely. So do Nancy and Jack and Alice from Class 5K. What a wonder!

“But Acting Head Teacher Mrs Mole is not so sure. Nor is Professor Smellie, or the mysterious bloke in black who claims to be a School Inspector.

“Then there’s Basher Malone – big, lumbering Basher Malone. He REALLY doesn’t like Angelino. And it looks like he’s out to get him…”

Pottymouth and Stoopid, by James Patterson and Chris Grabenstein, read by Scott Connolly

“David and his best friend Michael were tagged with awful nicknames way back in preschool when everyone did silly things. Fast-forward to seventh grade: ‘Pottymouth’ and ‘Stoopid’ are still stuck with the names – and everyone in school, including the teachers and their principal, believe the labels are true.

“So how do they go about changing everyone’s minds? By turning their misery into megastardom on TV, of course! Follow their roller-coaster journey from the ultimate losers to the biggest winners.

“This important story delivers more than just laughs – it shows that the worst bullying doesn’t have to be physical, and that things will get better.”