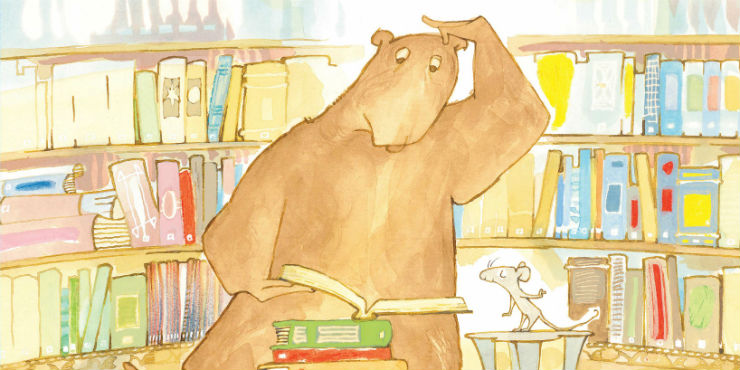 The Snatchabook by Helen and Thomas Doherty

Eliza, a young rabbit, discovers the funny little creature who has been stealing her books. In a remarkable act of generosity, she offers to read him a nightly bedtime story so he can forsake his life of crime whilst still enjoying books. Now if there had been a public library in Eliza’s wood, the Snatchabook could have joined, borrowed all the books he could read for free and gone along to storytimes and Tot Rock too.

A library book for Bear by Bonny Becker

Bear has 7 books already, so why does he need to go the library? When he gets there (cajoled by his friend Mouse) he overhears a story time and is seduced. Bonny Becker’s other picture books about Bear and Mouse are well worth hunting out if you haven’t come across them before. We have them all because we are a library, and you may borrow them for free, just like Bear. This paperback edition came out in November 2015.

Now we were very pleased to see Emily Gravett’s masterpiece about the book loving rabbit reissued last year for its 10th anniversary. However, if you are of a squeamish disposition, you may not be as pleased as we were, and may not want to find out what happens to the poor little rabbit when the wolves in his library book come alive.

Sarah and Duck at the library by Sarah Gomes Harris

We really wish the librarian in this story didn’t say “Shhhhh!” (none of the staff in Suffolk Libraries would ever say such a thing) but we know all those Sarah and Duck enthusiasts will not unable to resist borrowing this cute little book, so we bought lots of copies.

How the library (not the prince) saved Rapunzel by Wendy Meddour

Now published in paperback, this rather bored Rapunzel is still looking out the window of her 16th floor flat. She refuses to cheer up or marry, but when a job offer arrives from the local library, her mood lightens and her life becomes busy and interesting.

I want a bedtime story! by Tony Ross

Good old Little Princess, back in another book to claim her rights.

There are some noisy creatures inside library books, such as dinosaurs that roar and headless ghosts that howl “WHOO!”

I believe in unicorns by Michael Morpurgo

Originally published in 2005 and reissued in 2015, this is a powerful story about a boy who hates school, being drawn into a magical world when he listens to story at the local library. It’s a wonderful book, quite short at only 112 pages, but it packs quite a punch. The exquisite illustrations are by Gary Blythe.

Get drawn into a story alongside Anthony Browne’s most famous character, Willy the gorilla. Anthony Browne is such a skilled craftsman; his works are always beautifully illustrated. Willy walks into another story each time he visits the library and opens a new book.

Follows the story of a little library card.

The last book before bedtime by Nicola O’Byrne

Lots of fairytale characters squabble over who should star in the last book before bedtime. It’s very funny, beautifully illustrated and has a spoken version available from scanning a QR code.

Ink and bone by Rachel Caine

First in a new series by Rachel Caine, The Great Library series remasters history to create an alternative world where the Great Library of Alexandria was not destroyed by fire, but has become a powerful state in its own right.