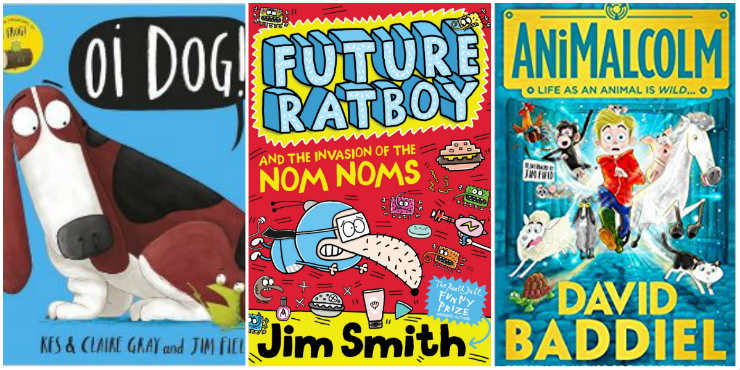 “This is a collection of 12 whizzy, crazy, hilarious books. They are guaranteed to tickle. Parents and teachers wondering how to keep your children interested in reading, why not start here? And you can always start them off by reading them out loud – funny voices an’ all!”

There are three categories - picture books, 6-8 years and 9-13 years - and the winners will be decided entirely by children’s votes. Parents and teachers are encouraged to look at the Lollies website or the Scholastic channel on the PopJam app to help children vote for their favourite books. The winning books will be announced at an awards ceremony in London in January 2018.

The Prince of Pants, by Alan MacDonald & Sarah McIntyre

“It’s Prince Pip’s birthday, and he can’t wait to choose a pair of pants to wear on his special day. But where have all his pants gone? Could it be that the palace has planned a very special, pants-tastic surprise party?

“A royally funny picture book by an award-winning duo, with glow-in-the dark undies on the final page.”

“Do you think vegetables are yucky? Just wait until you see what Monty the Monster has on his plate! Monty definitely does NOT want to eat his people. He’ll eat his vegetables - every single one! - but he will not eat his people.

“This hilarious tale of fussy eating in the Monster household is guaranteed to get children giggling.”

“Frog is changing the rules - dogs no longer sit on frogs. Phew! Dogs now sit on logs - and everyone else is going to have to sit somewhere different too. Will cats want to sit on gnats? Will spiders like sitting on gliders? Will whales be happy to sit on nails? And, most importantly, where is Frog going to sit?”

“Can a boy drink the sea? Surely it’s impossible! But Danny McGee does just that - and now he has his sights on other things. Soon he’s swallowing trees, flies, fleas, peas, mountains - where will it end?”

“When Eddy finds a pirate in his gran’s bath, his miserable summer holiday becomes a treasure hunt! Setting sail in a ship-shaped shed, crewed by an old lady and a grumpy penguin, what could possibly stop their quest for booty? Apart from the world’s most evil shopkeeper, a man-eating beast, and the maddest, baddest villain in all the seven seas.”

“Jams is homeschooled by his eccentric father while his mother works. He has no friends. One day their neighbours arrive with a monkey and ask, ‘Will you look after our hamster?’ They run away, abandoning Thimble. Jams and his Mum love Thimble instantly, but Jams’ father doesn’t like someone upsetting his routine.”

Future Ratboy and the Invasion of the Nom Noms, by James Smith

“When a bolt of lightning hit Colin Lamppost he was zapped millions of years into the future and turned into a half boy, half rat, half TV! With new superkeel powers and a real life sidekick in Not Bird, Future Ratboy was born.

“In this new adventure, can Future Ratboy and Not Bird save Shnozville from the bitey little insects that are turning everyone into zombies? Will they defeat the evil Mr X? And will they ever find their way home?”

Hamish and the Neverpeople, by Danny Wallace & Jamie Littler

“Nobody knows it yet, but the people of Earth are in big, big trouble. Like - HUGE trouble. Oh, come on, where’s your imagination? Double what you’re thinking! And it’s all got to do with a shadowy figure, an enormous tower, some sinister monsters, huge clanking and thundering metal oddballs, and people who are just like you. but not like you at all. Luckily Hamish and the PDF are around to help save the day! Aren’t they?”

“Malcolm doesn’t like animals. Which is a problem because his family love them. Their house is full of pets. What the house is not full of is stuff Malcolm likes. Such as the laptop he wanted for his birthday. The only bright spot on the horizon is the Year 6 school trip, which Malcolm never thought his parents would pay for. And yet there he is, on the bus, heading to - oh no - the farm.

“Over the next days, Malcolm changes. He learns a lot about animals. More, in many ways, than he would like. He learns what it’s really like to be an animal. A whole series of animals, in fact. It does make him think differently. And speak differently. And eat differently. But will he end up the same as he was before? Because sometimes the hardest thing to become is yourself.”

My Gym Teacher in an Alien Overlord, by David Solomons

“Zack and Lara have superpowers. Luke has new school shoes and a burning sense of resentment. He knows that aliens disguised as gym teachers are about to attack Earth but will anyone listen? No. So one dodgy pact with a self-styled supervillain later, and Luke is ready to save the world.”

I Don’t Like Poetry, by Joshua Seigal & Chris Piascik

“With poems on every topic from the power of books to the joys of fried chicken, this collection is packed with Joshua Seigal’s subversive humour and insight into the world of children. If you don’t like poetry after reading this, there’s probably something wrong with you!”

The Best Medicine, by Christine Hamill

“Philip is 12 years old and life is pretty good. He gets on with his mum and gets by pretty well at school - in spite of girl problems, teacher problems, bully problems and - er - poetry problems. Philip’s happy-go-lucky life is disrupted when his mother gets breast cancer. Bad enough that your mother is seriously ill - but could she not have developed a less embarrassing kind of cancer - toe cancer, maybe, or ear cancer?

“Philip’s attempt to cope with his situation are both hilarious and touching. Through it all, he’s writing letters to his hero, the comedian Harry Hill, looking for advice. Harry Hill remains stonily silent, and Philip has to get by without his advice. In the end, though, Harry Hill comes up trumps, Philip gets to do a comedy routine with him, and Philip’s mum and her cancer-mates get to have a good time too.”