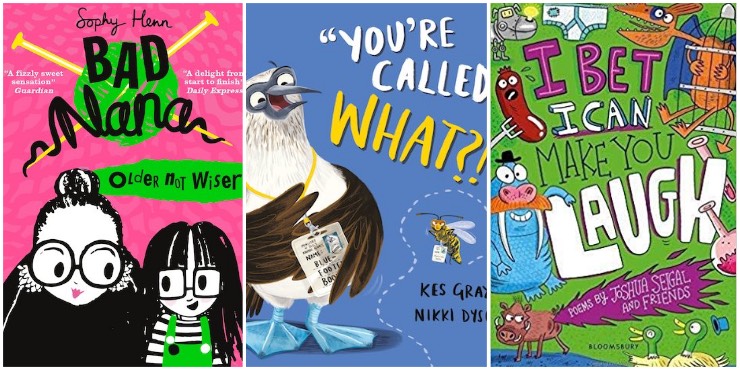 The Laugh Out Loud Awards (Lollies) celebrate the funniest children’s books of the year. There are 3 categories: Picture Books, Books for 6-8 year-olds and Books for 9-13 year-olds.

“Come on a great escape through the kitchen as we follow each sausage that decides to make a run for it. Will they succeed or will the cat, blender, plug hole or fan prove their downfall?”

“Who cares about being a fly on the wall? Spyder is here to prove that a spider can be the greatest spy of all!

“The name is Spyder, and the code name is 008 (legs). She might only be tiny, but don’t laugh! Spyder is fully kitted out with super-cool gadgets. Plus, she can climb up walls and crawl under sinks – a really handy skill when you’re a spy.

“Now a birthday cake is under threat. It’s time for Spyder to wriggle into action! She’s armed with binoculars, a top-secret laser pen and a yummy banana. Will Spyder save the day… and the birthday party?”

“You’re called WHAT?! Welcome to the Ministry of Silly Animal Names, where all the creatures have one thing in common: they want to change their names. This unique and tongue-twisting story isn’t just a story. It’s (kind of) true! The critters with these silly names really exist, and the book is bursting with weird and wonderful facts to amaze you!”

“Move over, Bonnie and Clyde, because there’s a new criminal mastermind in town: Baby Frank! Baby Frank’s parents say that he can’t have a pet - ‘Pets are for older kids’, ‘Be happy with your teddy’, ‘They cost too much to keep’ - which leaves Baby Frank with a BIG problem because he REALLY wants a pet. What’s a baby to do? Rob a bank, of course! But will money buy Baby Frank the fluffy pet he so desperately wants?”

“Aaargh! Just when you thought it was safe to go back to your bookshelf, David’s bad kids strike again. Quick – hide in a nuclear bunker!

“Ten more repellent little nippers are coming out to play. And trust us, you don’t want to be seen with them. There’s horrible Hank, who plays endless pranks on his family. There’s Tandy, whose titanic tantrums are stormy enough to sink ships. Plus eight more appalling brats, all illustrated in gruesome full-colour by the seriously brave Tony Ross: the only person who dares get close enough to sketch them!”

The Nothing to See Here Hotel, by Steven Butler & Steven Lenton

“Welcome to The Nothing to See Here Hotel! A hotel for magical creatures, where weird is normal for Frankie Bannister and his parents who run it.

“When a goblin messenger arrives, announcing the imminent arrival of the goblin prince Grogbah, Frankie and his family rush into action to get ready for their important guest. But it soon becomes obvious that the Bannister family are going to have their work cut out with the demanding prince and his never-ending entourage, especially when it turns out the rude little prince is hiding a secret.”

The Legend of Kevin, by Philip Reeve & Sarah McIntyre

“Kevin the flying pony blows in on a magical storm and - DOOF! - crashes into the balcony outside Max’s flat. As the storm waters rise and the town is besieged with creatures, Max and Kevin set about putting things right. With Max’s quick thinking and a constant supply of biscuits for Kevin, there’s nothing this heroic duo can’t achieve.”

“Meet Bad Nana: naughty but nice! Jeanie’s Grandma is BAD. Not bad like a vampire or a gangster, more like constantly up to no good. Sometimes she can be a bit embarrassing, but most of the time she’s REALLY FUN! Okay, so she’s definitely old enough to know better, but she doesn’t seem to care one bit. In fact, Jeanie thinks she might quite like it! And although Jeanie herself is a good girl and definitely NOT naughty at all, she can’t help but enjoy Bad Nana’s mischievous schemes!”

“Who needs superpowers to be a hero? This kid knows that normal is where it’s at! Murph and his crime-busting crew, the Super Zeroes, have been catching baddies all over the place. They’re living proof that being awesome isn’t about having special powers.

“But far away in a top-secret prison, the world’s scariest supervillain has just broken a thirty year silence. His first words? ‘Bring Kid Normal to me!’ Can Murph dodge this fearsome baddie and keep on flying under Mum’s radar? Being a hero is about to get a whole lot harder…”

I Bet I Can Make You Laugh, by Joshua Seigal (ed.)

“If you hate poetry but you like to laugh, here’s the perfect poetry book for you! It’s compiled by Joshua Seigal, the witty genius who brought you I Don’t Like Poetry. And it’s filled with super-silly verses to make you laugh – like it or not! (We bet you can’t help it!) There are poems about school rules, a verse about a bus that drives backwards and an ode to homework that eats dogs. A marvellously daft bonanza of mayhem and silliness – perfect if you hate poems. Or even if you like them!”

“Stan’s whole family are light years away from normal. Stan loves order. His family love CHAOS! But worst of all is his pesky little brother, Fred. He lives in his own warped dimension where he reckons licking the cake shop window is normal behaviour. Fred leaves ladybirds in Stan’s lunchbox, and snails under his bed. He scribbles on Stan’s solar system poster, and wipes his bogies all over the place. It’s horrific!

“So Stan has created this book full of tips, diagrams, charts and infographics: his own survival guide to his own totally bonkers life! Tee hee!”

I Swapped My Brother on the Internet!, by Jo Simmons & Nathan Reed

“‘I can get a new brother? On the internet?’ Jonny muttered. ‘Oh sweet mangoes of heaven!’.

“Everyone has dreamed of being able to get rid of their brother or sister at one time or another - but for Jonny, the dream is about to become a reality with SiblingSwap.com! What could be better than someone awesome to replace Ted, Jonny’s obnoxious older brother?

“But finding the perfect brother isn’t easy, as Jonny discovers when Sibling Swap sends him a line of increasingly bizarre replacements: first a merboy, then a brother raised by meerkats, and then the ghost of Henry the Eighth! What’s coming next?! Suddenly old Ted isn’t looking so bad. But can Jonny ever get him back?”