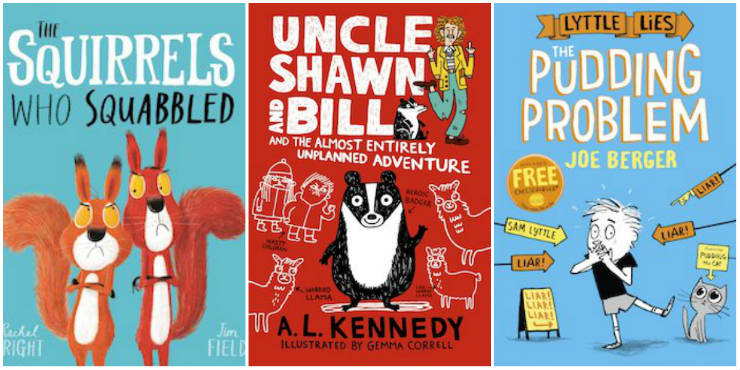 The Laugh Out Loud Awards (Lollies) celebrate the funniest children’s books of the year. There are 3 categories: Picture Books, Books for 6-8 year-olds and Books for 9-13 year-olds.

I Can Only Draw Worms, by Will Mabbitt

“This book is about worms. You MIGHT think that worms are boring… but you’d be WRONG. These worms have incredible adventures! Will can’t draw those, though, so you’ll have to imagine them.

“I Can Only Draw Worms is the unconventional counting book that you didn’t know you needed, and certainly would never have expected. Children (and adults!) have been known to snort out loud, get a stitch that lasts for hours and laugh so much their faces ache upon getting to the final page – this is definitely one to read again, and again, and again!”

“As the owner of a large Chocolate Factory, Mr Bunny is never satisfied with his success. When Mr Bunny begins to expect too much of his staff at the Chocolate Factory, he is left to run it alone. Will Mr Bunny realise that many minds are better than one when trying to get a big job done well? Or will his chocolate empire melt under the pressure of running it alone?”

“According to Frog: cats sit on gnats; Dogs sit on logs; Raccoons sit on macaroons; Armadillos sit on pillows; and Chicks sit on bricks. But wait! Cat doesn’t like sitting on gnats, they keep biting his bottom! Will Frog and Dog help him change the rules?”

The Squirrels who Squabbled, by Rachel Bright & Jim Field

“Greedy squirrels Cyril and Bruce both have their sights on a very special prize: the very last nut of the season! As the nut bounces crazily though the forest, the squirrels race after it, between the trees, over boulders, down the river and – ARGH! – right to the edge of a waterfall! Working together might be the only way to save themselves now…”

Barry Loser and the Birthday Billions, by Jim Smith

“It’s Barry’s birthday and his mum and dad have bought him the amazekeel new gaming helmet he wanted - The Shnozinator 9000! It’s the best birthday present ever - until his baby brother breaks it and ruins everything. But Barry has a plan: he’ll just have to become a billionaire inventor and make enough money to buy another one, before his life is comperleeterly over.”

The Pudding Problem, by Joe Berger

“To Sam Lyttle, the truth is like an elephant. It’s heavy, worrying and wrinkly. And when it’s sitting in your way, you can’t go under it or over it. But you CAN skirt round it…

“So Sam does, every now and then, tell the odd porky-pie, much to the annoyance of his family. But is there more to Sam’s occasional streeeetching of the truth than meets the eye?”

“I is Pig. This is my diary and I doubts you will believe any of it. In fact, if you is the kind of farmer what finds it hard to believe unbelievable stuff, you should put it down RIGHT NOW. It’s all 1000% true and 10,000% BONKERS!”

There’s a Werewolf in My Tent!, by Pamela Butchart & Thomas Flintham

“Izzy and her friends are SO EXCITED about their school trip. They’re going camping and there’ll be marshmallows and no washing and everything. But then WEIRD things start happening! There are howling sounds at night, and some sausages have gone missing, and it’s nearly a full moon. But it’s when they see their new teacher’s hairy legs that they KNOW! There’s a werewolf on the school trip and they’re all DOOMED!”

“This book is packed with awesome true stories, real science and fascinating facts and will make you laugh loads - and it’s all about football. What is a vomitory? When do footballers wee? Where do goalkeepers let in chickens? When did women start playing football? You’ll find the answers to these questions and more in chapters on subjects such as biology, maths and history.”

My Mum’s Growing Down, by Laura Dockrill & David Tazzyman

“Mum is a gamer, a party animal and a free spirit making life hard work for her nine year old son. These poems are a glimpse into their parent child relationship; their antics and adventures. The poems are bold, brave, funny and some - very moving. This collection shows just how funny, rude and naughty mums can be!”

“Having two sets of grandparents is turning out to be very good for me. The Wrinklies are keen on giving presents AND they’re planning a family outing which is going to be EPIC! Even Delia wants to come. (I can always ignore her.).”

Uncle Shawn and Bill and the Almost Entirely Unplanned Adventure, by A. L. Kennedy & Gemma Correll

“Badger Bill needs rescuing. He’s been kidnapped by two nasty sisters who are about to make him fight a boxing match against three even nastier dogs. The four most depressed llamas in the history of llamas need rescuing too. They are about to be turned into llama pies.

“But never fear - Uncle Shawn is here! He loves rescuing things. He has a rescuing plan, which involves dancing, and a mole, and an electric fence. What could possibly go wrong?”