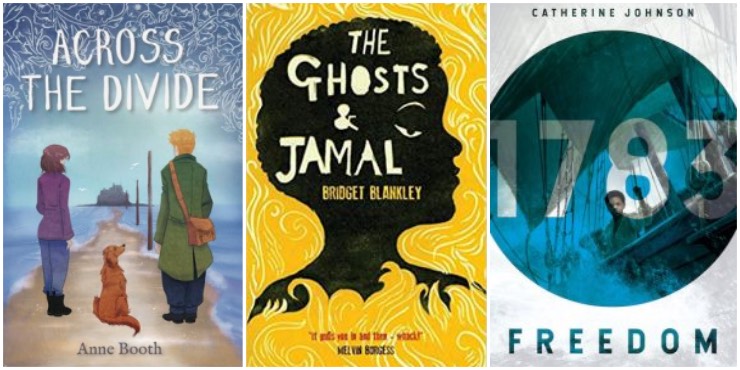 The Little Rebels Award recognises children’s fiction which fights for social justice and social equality, and against stereotypes and discrimination. The winner will be announced at a special ceremony on Wednesday 10 July.

The Ghosts & Jamal, by Bridget Blankley

“Waking up in the aftermath of a terrorist attack, 13-year-old Jamal tries to piece together what has happened whilst simultaneously trying to evade capture by the attackers. It soon becomes clear that he has been living in a separate outhouse from his family on account of the “bad-spirits” – his epilepsy. In search of the ‘ghosts’ who brought death and destruction to his home, Jamal encounters exploitative adults and misguided attempts at charitable intervention.”

Across the Divide, by Anne Booth

“Olivia lives with her mum and grandparents. She has a relatively normal modern family. The opening of a new Army cadets unit causes turmoil both at home and at school. She wants to join, a decision her ex-army grandfather supports, but her pacifist mother is ardently opposed. Her best friend Aiden also disagrees with her decision, causing tension in their friendship.

“When her mum is imprisoned for leading a pacifist protest, Olivia is forced to spend time with her dad who lives on Lindisfarne. The island feels far away and detached from the mainland, almost magical. And even William, a young boy she meets there seems different.”

“AJ’s grandfather has always been the one to keep his unusual family together, so when he dies things start to unravel at the edges. AJ is worried about his parents but they don’t really seem to notice.

“In order to deal with his grief and to keep his anxiety at bay, AJ does what he and his grandfather did best: running. Round and round the Olympic Park, aiming for the nationals, running to escape, AJ only seems to be heading ever closer to disaster.”

The King Who Banned the Dark, by Emily Haworth-Booth

“When a king bans the dark completely, installing an artificial sun, and enforcing ‘anti-dark’ laws, it seems like a good idea. The citizens don’t need to worry about monsters, crime, or any of the other scary things that might live in the dark. But what happens when nobody can sleep? Will the citizens revolt?”

“There’s no escape – even when you escape.

“Where can a slave like Nat to run to? Forced to leave his family and move to England with his master, Nat can see only one silver lining. He’s heard that once a slave sets foot on English soil, they’re free. So Nat travels across half the world, from Jamaica to England. But when he arrives, he finds the rumour is false. He’s still a caged bird. Unless he runs…”

“Yazan no longer goes to the park to play, and he no longer sees his friend who lives next door. Everything around him is changing. His parents sit in front of the television with the news turned up LOUD and Yazan’s little red bike leans forgotten against the wall. Will he ever be able to go outside and play?”

The New Neighbours, by Sarah McIntyre

“When new neighbours move in to the tower block, what will the other residents of Pickle Rye think? Find out in this hilarious and light-hearted book that is bursting with wonderful characters and humour. Giggle away as you hop, trot and totter down the stairs to share news of the new neighbours and learn just how important it is to leave judgements and prejudices far behind.”