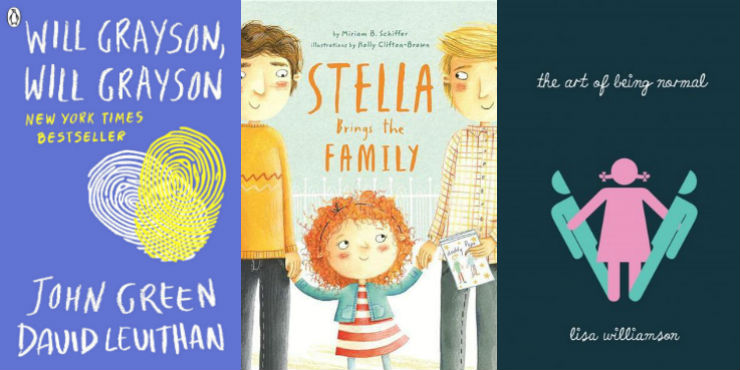 Who’s in my family?: all about our families by Robie Harris

A simple matter-of-fact book describing the different families children find themselves part of.

And Tango makes three by Peter Parnell and Justin Richardson

Two nurturing male penguins take care of a baby penguin in this storybook based on a true story.

Explores the history of same-sex marriage in an approachable way for children.

Biographies of successful gay individuals who have overcome prejudices to make a change in the world.

The great big book of families by Mary Hoffman

A calm reassuring discussion, nicely illustrated, about the many patterns models of family life.

A reprint from a title first published in the US in 1989, now illustrated by Laura Cornell.

Stella brings her Papa and Daddy to the Mother’s Day celebration party.

We are all made of molecules by Susin Nielsen-Fernlund

The dad of one of the central characters is gay and the book deals with her reaction to that, and a horrible incident of homophobic bullying that occurred ‘off page’ before the story started.

Described as “part thriller, part romance”, this story follows Megan, who is mute after her best friend dies, but everything changes after she befriends Jasmine.

Back to you by Cathy Cole

Seventh instalment in the Heartside Bay series, following the ups and downs of relationships in a circle of friends.

The apple tart of hope by Sarah Moore Fitzgerald

Meg is shocked when her best friend, Oscar – also baker of the best apples tarts in the world – goes missing.

Simon vs. the Homo Sapiens Agenda by Becky Albertalli

Simon is happy being in the background while he decides when and how how to come out. When one of his emails is read by a class blackmailer, everything is out of Simon’s control. Though it deals with difficult themes relevant to teenagers, this is certainly not a solemn book. It includes light, funny and romantic material while never sentimentalising or ridiculing.

Covers many aspects of sexual orientation and gender identity, with testimonials from people with all kinds of experiences.

Paul’s confident and stable life is rocked when he faces heartbreak.

Craig and Harry attempt to set the world record for the longest kiss. Along their journey to breaking the record, the book weaves in and out of the lives of several couples and families.

One cold night, in a most unlikely corner of Chicago, Will Grayson crosses paths with Will Grayson. Two guys with the same name, running in two very different circles, suddenly find their lives going in new and unexpected directions, and culminating in epic turns-of-heart and the most fabulous musical ever to grace the high-school stage.

Sci-fi thriller following Reese and David, two teenagers adapted with alien DNA by the Imria, an extraterrestrial race that has been secretly visiting Earth for decades.

Lies we tell ourselves by Robin Talley

The art of being normal by Lisa Williamson

Alex as well by Alyssa Brugman

Alex has been raised as a boy for 14 years, until Alex announces that she is a girl. When Alex sets about changing her life, no one knows how to react, least of all her parents.