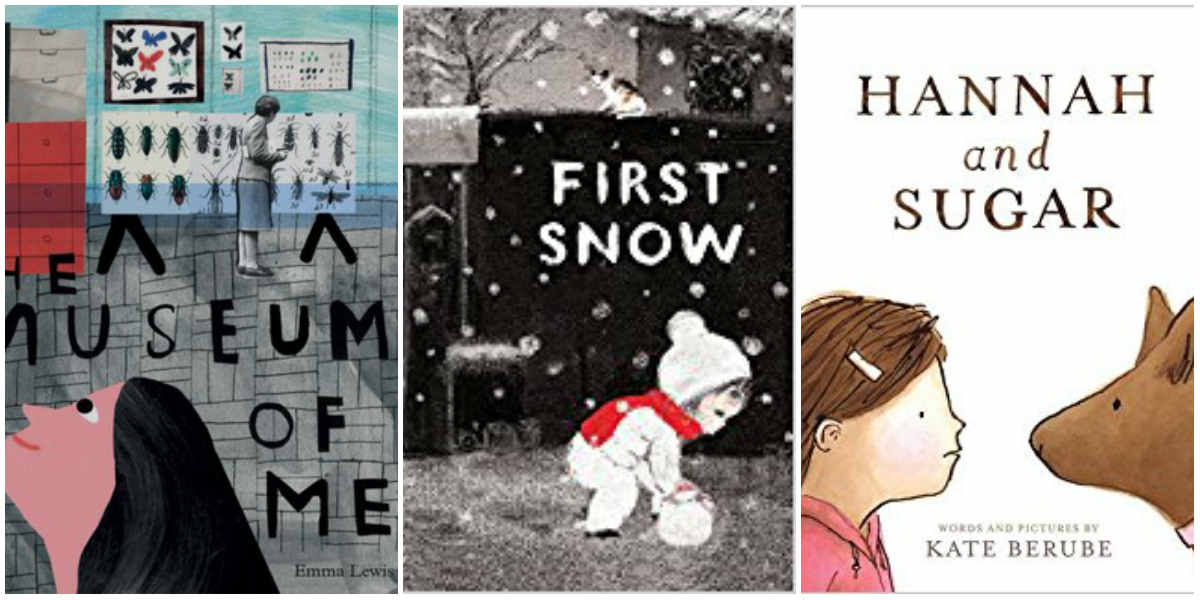 The Klaus Flugge Prize recognises promising and exciting newcomers to children’s picture book illustration. Named after the influential children’s book publisher who founded Andersen Press, which specialises in picture books and children’s fiction, it is now in its second year, with the winner being announced today (13 September)

Last year’s winner was Hector and the Hummingbird, by Nicholas John Frith, a story about a quiet bear and his noisy best friend.

The Journey, by Francesca Sanna

Already a winner of the 2017 Amnesty CILIP Honours and a UK Literacy Association Award, author/Illustrator Francesca Sanna was inspired to write this, her first picture book, after meeting two girls in a refugee centre in Italy:

“With haunting echoes of current affairs, this beautifully illustrated book explores the unimaginable decisions made as a family leave their home and everything they know to escape the turmoil and tragedy brought by war.”

This bold retelling of Little Red Riding Hood won the prestigious Macmillan Prize 2014 for Children’s Picture Book Illustration, and was named as one of the New York Times Best Illustrated Children’s Books of 2016:

“Little Red Riding Hood meets a wolf on her way through the woods to visit her sick grandmother. The wolf is hungry, and Red Riding Hood looks tasty, so he hatches a dastardly plan, gobbles up Grandma and lies in wait.

“So far, so familiar. But this Little Red Riding Hood is not easily fooled, and this big bad wolf better watch his back.”

The Museum of Me, by Emma Lewis

Winner of the Opera Prima Award at this years Bologna Children’s Book Fair, Emma Lewis’s collage of mixed-media illustrations looks at museums and their value and what the things we collect, and the reasons we collect them, tell us about ourselves:

“This work follows a little girl on a journey of discovery to find out what museums are and what they hold in store. Brimming with anticipation, our young protagonist encounters giant bugs and peculiar beasts; ancient pots and contemporary paitings; feathery leaves and flowers as big as her own head!”

“Look out. Now look up. From the sky one flake falls, then another. And just like that - it’s snowing. In this beautiful book from debut creator Bomi Park, a young girl wakes up to the year’s first snowy day. From her initial glimpse out the window to her poignant adventures - rolling a snowman, making snow angels - the girl’s quiet quests are ones all young readers will recognise. Simple, muted text and exquisite, evocative art conjure the excitement of a day spent exploring the wonder of snow - and the magic that, sometimes literally, such a day brings.”

Hannah and Sugar, by Kate Berube

Winner of the Literary Arts Oregon Book Award and the Eloise Jarvis McGraw Award for Children’s Literature, this is a tale of fear, empathy and bravery:

“Every day after school, Hannah’s school bus is greeted by her classmate’s dog, Sugar. All of the other kids love Sugar, but Hannah just can’t conquer her fear of dogs. Then, one day, Sugar goes missing, so Hannah joins the search with her classmates. Will Hannah find a way to be brave, and make a new friend in the process?”