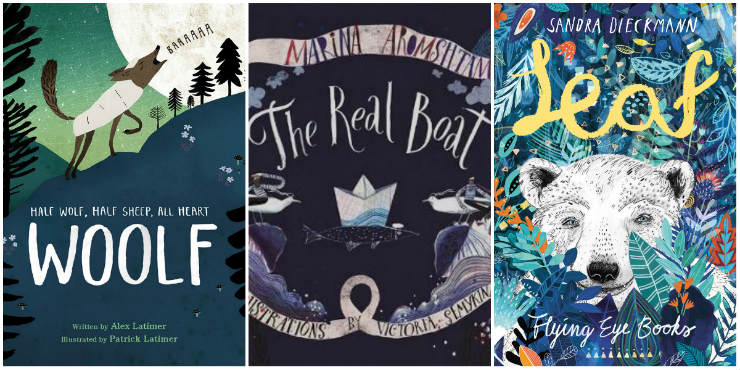 The Klaus Flugge Prize recognises promising and exciting newcomers to children’s picture book illustration. Named after the influential children’s book publisher who founded Andersen Press, which specialises in picture books and children’s fiction, it is now in its third year, with the winner being announced in September.

“Working up the courage to take a big, important leap is hard, but Jabari is almost absolutely ready to make a giant splash.

“In a sweet tale of overcoming your fears, debut author-illustrator Gaia Cornwall captures a moment at the swimming pool between a patient and encouraging father and a determined little boy you can’t help but root for.”

“When a polar bear arrives unexpectedly in the woods, the animals fear and avoid him, suspecting him to be dangerous - and his habit of collecting leaves only adds to their distrust.

“Then one day, they watch as he attempts to fly over the water with wings made of colourful leaves, just trying to go home. Maybe he needs some help?”

The Cranky Caterpillar, by Richard Graham

“One day Ezra hears a gloomy blue tune coming from the piano. To her suprise, it’s a caterpillar making the sound: a cranky caterpillar. Ezra tries to cheer him up with some fresh air, cakes, and new hats, but nothing seems to work. What can Ezra do to help the cranky caterpillar change his tune?”

Beyond the Fence, by Maria Gulemetova

“A small pig lives in a large house with a boy who tells him how to dress and what to do. One day, however, he meets a wild pig who introduces him to life ‘beyond the fence’.

“Quirky and charming, this debut book contains important messages about individuality and making your own choices.”

Woolf: half wolf, half sheep, all heart, illustrated by Patrick Latimer, written by Alex Latimer

“Max has a key and a box of midnight blue. When he turns the key in the lock - WHOOSH! Day slips inside as night sweeps out. Darkness tumbles into the air. It dances and whirls around the room. It goes under the bed, under the chair - everywhere!

“The Night Box is an enchanting bedtime story which holds a candle up to the magical nature of night-time.”

My Name is Not Refugee, by Kate Milner

“This powerful and moving story draws young readers into each stage of the journey, inviting the chance to imagine the decisions he or she would make.”

Curiosity: the story of a Mars Rover, by Markus Motum

“This is a fascinating book about the search for life on Mars told from the unique perspective of ‘Curiosity’, the Mars Rover sent to the red planet by NASA. Markus Motum’s stylish illustrations and diagrams help tell the story of how and why this robot travelled 350,000,000 miles to explore a planet where no human has been before.”

Hortense and the Shadow, illustrated by Lauren O’Hara, written by Natalia O’Hara

“Through the dark and wolfish woods, through the white and silent snow, lived a small girl called Hortense. Though kind and brave, she was sad as an owl because of one thing. Hortense hated her shadow.”

“When the paper boat learns that there is such a place as the ocean, he is determined to go there so he can be a real boat. On his journey he meets all sorts of friends, from the strong little tug board to the glittering ocean liner. But he also learns that the real ocean is huge and deep and full of dangers.”

Fergal is Fuming!, by Robert Starling

“A dragon with a short temper is not a good combination, as Fergal’s family and friends soon find out. He burns the dinner (literally), reduces the football goal to ashes and absolutely cannot play a nice, quiet board game.

“It is only when he starts to notice other animals have clever tricks to calm down that Fergal begins to win back his friends, especially when he discovers dragons can cool off in a very handy way.”

“Big and Little are the very best of friends. They do everything together. That is until one day, when Big suddenly hides away inside his shell. Little tries every method to get Big to come out and play again - he bakes him his favourite cake, he even asks all of his friends for help - but nothing seems to be working! What could possibly be wrong?”

“From the bird-of-paradise that performs its extravagantly colourful courtship dance in the rainforest to the bar-tailed godwit that flies thousands of miles across the ocean without stopping, explore the world of magnificent birds in this gift book, created in association with the RSPB.”

“How many ways can a cat interact with a box? This cat will entrance young readers as it investigates every box it can - and makes a mouse friend along the way.”

“A large egg appears in the backyard. Is it a giant canary? A lizard? A turtle? It’s not any of those kinds of things. It’s a dinosaur!

“Follow a day filled with mayhem, fun and excitement in the life of Dino, as he causes havoc in the house, makes new friends and learns right from wrong (the goldfish is not food!).”