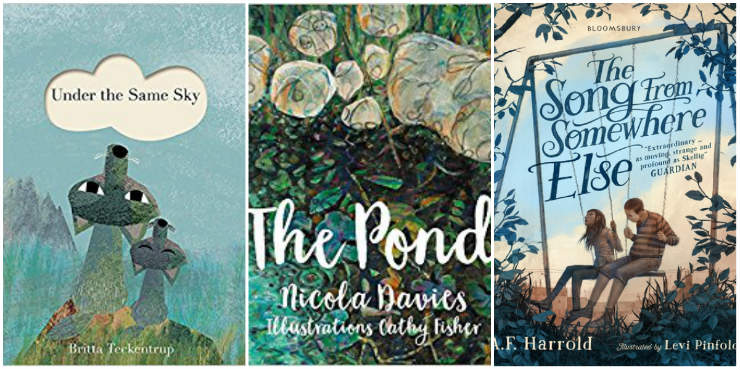 The Kate Greenaway prize celebrates the best-illustrated children’s and Young Adult books from the past year.

“With mainly black and white illustration and deceptively simple text, author and illustrator Debi Gliori examines how depression affects one’s whole outlook upon life, and shows that there can be an escape - it may not be easy to find, but it is there.”

A First Book of Animals, illustrated by Petr Horáček, written by Nicola Davies

“A treasury of poems about the animal world. Polar bears playing on the ice, tigers hunting in the jungle, fireflies twinkling in the evening sky and nightingales singing in the heart of the woods - there are animals everywhere.”

“As she unpacks in her new bedroom, Ella is irresistibly drawn to the big old house that she can see out of her window. Surrounded by overgrown gardens, barbed wire fences and ‘keep out’ signs. It looks derelict. But that night a light goes on in one of the windows. And the next day she sees a girl in the grounds.

“Ella is hooked, the house has a story to tell, she is sure of it. Enter Thornhill, Institute for Children, and discover the dark secrets that lie within. But once inside, will you ever leave?”

Under the Same Sky, by Britta Teckentrup

The Song from Somewhere Else illustrated by Levi Pinfold, written by A. F. Harrold

“Frank doesn’t know how to feel when Nick Underbridge rescues her from bullies one afternoon. No one likes Nick. He’s big, he’s weird and he smells - or so everyone in Frank’s class thinks.

“And yet, there’s something nice about Nick’s house. There’s strange music playing there, and it feels light and good and makes Frank feel happy for the first time in forever. But there’s more to Nick, and to his house, than meets the eye, and soon Frank realises she isn’t the only one keeping secrets. Or the only one who needs help.”

King of the Sky, illustrated by Laura Carlin, written by Nicola Davies

“Starting a new life in a new country, a young boy feels lost and alone - until he meets an old man who keeps racing pigeons. Together they pin their hopes on a race across Europe and the special bird they believe can win it: King of the Sky.”

Town is by the Sea, illustrated by Sydney Smith, written by Joanne Schwartz

“While a young boy enjoys a summer’s day, his thoughts constantly return to his father, who is digging for coal deep under the sea.

“This beautifully understated and haunting story brings a piece of mining history to life.”

The rest of the longlist

Wild Animals of the South, by Dieter Braun

“Through colourful illustrations, readers will be dazzled by the giraffes and elephants in Africa, koalas and kangaroos in Australia, huge blue whales in the open oceans, and many more.”

The Pond, illustrated by Cathy Fisher, written by Nicola Davies

“The Pond is a touching picture book about a young boy and his family, overcoming the loss of his father through a small pond in the garden. This colourful, emotional book is filled with natural imagery and will teach children not only about death, and loss, but the importance of the natural world.”

“When the great magician, Hypno, goes missing just before a show, his rabbits Abra and Cadabra step in to save the day. But are they all that they seem? Or is there more to their sleight of paw than meets the eye?”

A Child of Books, by Oliver Jeffers and Sam Winston

“An inspiring and lyrical picture book about a little girl who sails her raft ‘across a sea of words’ to arrive at the house of a small boy. There she invites him to come away with her on an adventure where they can journey through ‘forests of fairy tales’, ‘across mountains of make-believe’ and ‘sleep in clouds of song’. Guided by his new friend, the boy unlocks his imagination and a lifetime of magic lies ahead of him. But who will be next?”

Harry Potter and the Chamber of Secrets, illustrated by Jim Kay, written by J. K. Rowling

We Found a Hat, by Jon Klassen

“Two turtles have found a hat. The hat looks good on both of them. But there are two turtles. And there is only one hat!”

“December 1941. Britain is at war. Emmaline has been evacuated away from the bombs to Briar Hill Hospital in Shropshire. When she gets there she discovers a secret. It’s not to be shared, not to be told to anyone, even her friend Anna. But she’ll tell you. This is Emmaline’s secret. There are winged horses that live in the mirrors of Briar Hill.”

The Song from Somewhere Else has also been longlisted for the 2018 Carnegie Medal.

The Liszts, illustrated by Julia Sarda, written by Kyo Maclear

“Mama Liszt, Papa Liszt, Winifred, Edward, Frederick, and Grandpa Liszt make lists all day long. So does their cat. Then one day a visitor arrives. He’s not on anyone’s list. Will the Liszts be able to make room on their lists for this new visitor? What will they do when something unexpected happens?”

The Pavee and the Buffer Girl, illustrated by Emma Shoard, written by Siobhan Dowd

“Jim and his family have halted by Dundray and the education people have been round mouthing the law. In school the Traveller kids suffer at the hands of teachers and other pupils alike, called ‘tinker-stinkers’, ‘dirty gyps’ and worse. Then the punches start. The only friendly face is Kit, a settle girl who takes Jim under her wing and teaches him to read in the great cathedral chamber in the cave below the town.”

“Have you ever considered running away to Antarctica? Of course you have! Because it’s a land free of worries and responsibilities! Think again, my friend. This penguin has come to tell you that his life down there is no picnic. For starters, it is freezing. Also, penguins have loads of natural predators. Plus, can you imagine trying to find your mum in a big crowd of identical penguins?”

Lots: the diversity of life on Earth, illustrated by Emily Sutton, written by Nicola Davies

“There are living things everywhere: the more we look, the more we find. There are creatures on the tops of the tallest jungle trees, at the bottom of the coldest oceans, even under the feathers of birds and in boiling volcanic pools. So how many different kinds are there? One, two, three - lots!”

“‘Bleak was the day and the wind whipped down, when I and my sisters walked to town…’

“So begins the story of three sisters and their wild and magical encounter with a whale, stranded on a beach. With illustrations full of light and movement, a powerful text that reads like a ballad, children and adults alike will be transported to beachside holidays of long ago, feel the wind in their hair and taste the salt spray, as the girls battle against huge odds to save something precious and vulnerable.”