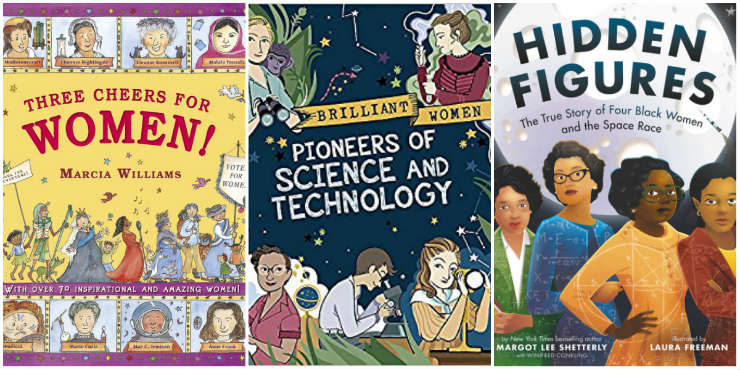 As it’s International Women’s Day, we’ve put together a list of our favourite children’s fiction and non-fiction featuring awesome girls and women.

“When a group of explorers stumble upon a girl living in the forest, they bring her to their concrete apartment block. But our little girl was raised by animals, taught to talk by birds, to eat by bears, to play by foxes. Her captors are in for quite the surprise. They’ll soon learn you cannot tame something so happily wild!”

Exciting illustrations and a strong message about nature and what it is to be free-spirited, by Hawaiian artist Hughes.

“When the Queen steals Emily Brown’s favourite toy and erstwhile companion - a toy rabbit called Stanley - Emily sets out to get him back and teach the naughty monarch a valuable lesson.”

“Princess Smartypants does not want to get married. She enjoys being a Ms. But being a rich and pretty princess means that all the princes want her to be their Mrs. Find out how Princess Smartypants fights to preserve her independence in this hilarious fairytale-with-a-difference.”

Hilda and the Troll, by Luke Pearson

“While on an expedition to illustrate the magical creatures of the mountains around her home, Hilda spots a mountain troll. As the blue-haired explorer sits and sketches, she slowly starts to nod off. By the time she wakes up, the troll has totally disappeared and, even worse, Hilda is lost in a snowstorm. On her way home, Hilda befriends a lonely wooden man, and narrowly avoids getting squashed by a lost giant.”

Hilda is ‘an adventurous young girl who lives in an idyllic mountainous wilderness with her mother and deerfox companion, Twig’. Other titles in the series are Hilda and the Midnight Giant, Hilda and the Stone Forest, Hilda and the Bird Parade and Hilda and the Black Hound. There is also a series on Netflix.

“Garth Nix is on hilarious form as he spins his very own fairy tale, featuring Princess Anya, who, with her loyal dog, must embark on a terribly important (capital Q) Quest to acquire the ingredients for a reversal lip balm, the vital item needed to change a frog back to a prince - oh, and save her kingdom from her villainous step(step)father.”

Featuring an almost all-female cast of princesses, wizards, warriors, robbers and transfigured animals, this is a funny and a great adventure.

“In the land of Ingary, where seven league boots and cloaks of invisibility do exist, Sophie Hatter catches the unwelcome attention of the Witch of the Waste and is put under a spell.”

This has also been made into a critically acclaimed and magical film by Studio Ghibli and a four-volume graphic novel adaptation which starts here.

“When Coraline explores her new home, she steps through a door and into another house just like her own - except that it’s different. It’s a marvellous adventure until Coraline discovers that there’s also another mother and another father in the house. They want Coraline to stay with them for ever.”

This is also a tremendous stop-motion animation film from Laika.

Lockwood and Co: The screaming staircase, by Jonathan Stroud

A hilarious and terrifying series for older children. Despite the misleading title and the image on the cover the main character isn’t Anthony Lockwood but his fellow ghost-busting team mate, Lucy Carlyle.

The other books in the series are The Creeping Shadow, The Hollow Boy, The Whispering Skull and The Empty Grave.

In the first book in this outstanding series:

“When Lyra’s friend Roger disappears, she and her daemon, Pantalaimon, determine to find him. The ensuing quest leads them into the bleak splendour of the North, where armoured bears rule the ice and witch-queens fly through the frozen skies.”

Inspiring and strikingly illustrated bedtime tales about women who have changed the world. The first volume is reportedly already the most successful book in the history of crowdfunding – selling more than one million copies around the world and translated into 36 languages. The second volume has already exhausted its first print run and looks to be just as popular.

“Join Marcia Williams as she celebrates incredible women from around the world and throughout history. From writers to warriors and astronauts to activists, discover their awesome stories and be amazed by their achievements. Marcia Williams’ much-loved comic-strip style will encourage even the most reluctant reader to enjoy this inspirational book packed with facts, quotes and jokes.”

“Campaigning through wars and facism, demanding their vote via protests, rallies and even imprisonment, global women’s suffrage took more than a century to achieve and is still ongoing today. Tracing its history from New Zealand at the end of the 19th century, follow this empowering movement as it spread from Oceania to Europe and the Americas, then Africa and Asia up to the present day.”

Women in Sport: 50 fearless athletes who played to win, by Rachel Ignotofsky

“Women in Sport celebrates the success of the tough, bold and fearless women who paved the way for today’s athletes. The sportswomen featured include well-known figures like tennis player Serena Williams and broadcaster Clare Balding, as well as lesser-known pioneers like Gertrude Ederle, the first woman to swim the English Channel, and Keiko Fukuda, the highest-ranked female judoka in history.”

“Featuring 40 trailblazing black women in the world’s history, this book educates and inspires as it relates true stories of women who broke boundaries and exceeded all expectations. Debut author/illustrator Vashti Harrison pairs captivating text with stunning illustrations as she tells the stories of both iconic and lesser-known female figures of black history - from nurse Mary Seacole, to politician Diane Abbott, mathematician Katherine Johnson and singer Shirley Bassey.”

“Dorothy Vaughan, Mary Jackson, Katherine Johnson, and Christine Darden were good at math - really good. They participated in some of NASA’s greatest successes, like providing the calculations for America’s first journeys into space. And they did so during a time when being black and a woman limited what they could do. But they worked hard. They persisted. And they used their genius minds to change the world.

“In this picture book edition, we explore the story of four female African American mathematicians at NASA and how they overcame gender and racial barriers to succeed in a highly challenging STEM-based career.”

Women in Science: 50 fearless pioneers who changed the world, by Rachel Ignotofsky

“A gloriously illustrated celebration of trailblazing women. Women in Science highlights the contributions of fifty notable women to the STEM fields of science, technology, engineering and mathematics, from both the ancient and modern worlds. The book also contains fascinating infographics and an illustrated scientific glossary.”

I Am Malala: how one girl stood up for education and changed the world, by Malala Yousafzai & Patricia McCormick

“Malala Yousafzai tells her story - from her childhood in the Swat Valley to her shooting, recovery and new life in England. She’s a girl who loves cricket, gossips with her best friends, and, on the day of the shooting, nearly overslept and missed an exam. A girl who saw women suddenly banned from public, schools blown up, the Taliban seize control, and her homeland descend into a state of fear and repression.

“This is the story of her life and her passionate belief in every child’s right to education, her determination to make that a reality throughout the world and her hope to inspire others.”