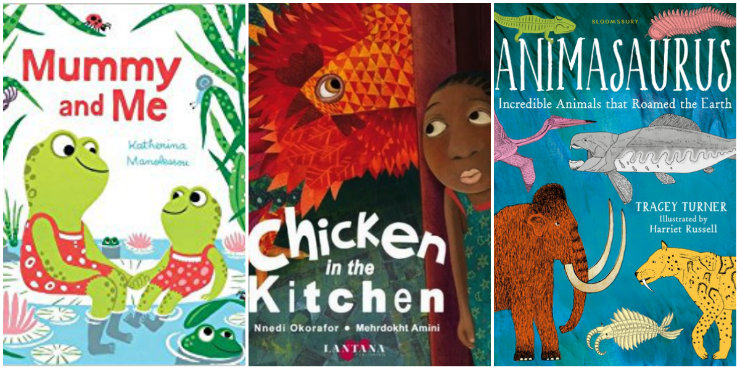 This year’s winner was Ludwig Volbeda, whose work can be seen in Tortot: the cold fish who lost his world and found his heart, by Benny Lindelauf and translated by Laura Watkinson. UK illustrator Laura Carlin won in 2015, with her book A World of Your Own and her artwork for a new edition of Ted Hughes’ The Iron Man.

The longlist for the UK was compiled by The Internatonal Board on Books for Young People and The International Centre for the Picture Book in Society.

Chicken in the Kitchen, illustrated by Merdokht Amini, written by Nnedi Okorafor

“What would you do if you woke up one night to find the shadow of a giant chicken passing your bedroom door? Go and investigate of course!

“When Anyaugo follows a giant chicken into her kitchen one warm night in Nigeria, she embarks on a hilarious adventure where nothing is quite as it seems. Is the nature spirit that lives in the wooden walls of her house a help or a hindrance? Is the mischievous giant chicken a friend or a foe? Most importantly, will Anyaugo be able to save the food her aunties have cooked for the New Yam Festival the next day?”

A Matter of Life and Death, by Alexis Deacon

“As the great chief matriarch lay dying, she gave one final decree: upon her death there would be a contest. Having no heir of her own blood she called on the Gods. Let fate decide the one truly worthy to rule in her place.

“The rich, the strong, the wise, the powerful; many put forward their names in hope of being chosen. But when the night came, only fifty souls alone were summoned.”

“Shackleton’s Journey is a unique visual re-telling of Ernest Shackleton’s landmark expedition crossing the Antarctic from one pole to the other. William Grill’s impeccably researched and informative illustrations celebrate the 100th anniversary since the historic exploration by Shackelton and his crew on Endurance. Children will love exploring Grill’s exploded diagrams and the fascinating details of this landmark voyage.”

The Wolves of Currumpaw, illustrated by William Grill, written by Ernest Thompson Seton

“The Wolves of Currumpaw is a beautifully illustrated modern re-telling of Ernest Thompson Seton’s epic wilderness drama Lobo, the King of Currumpaw, originally published in 1898.

“Set in the dying days of the old west, Seton’s drama unfolds in the vast planes of New Mexico, at a time when man’s relationship with nature was often marked by exploitations and misunderstanding.

The Girl with the Parrot on her Head, by Daisy Hirst

“When she moves house, Isabel loses her best friend forever. She is angry and lonely and decides it’s better to be by herself. But after a time she faces a new problem that leads her to make a brilliant new friend.”

The Little Gardener, by Emily Hughes

“There was once a little gardener and his garden meant everything to him. He worked hard, very hard, but he was just too little (or at least he felt he was).

“In this gentle, beautiful tale, Emily Hughes, the celebrated author of Wild, departs from the larger than life wild-girl of her debut to pursue a littler than life gardener, in a story that teaches us just how important it is to persist and try, no matter what the odds.”

The Tree, by Neal Layton

“The tree. Home to a family of birds in their nest, squirrels in their drey and rabbits in their burrow. But what happens to the animals when a man and woman decide to cut it down and use it for their dream house? Can the tree be home to both the animals and the humans?”

“Stanley’s stick it not just a stick. With a stick in hand, Stanley’s options are endless - he flies to moon, writes in the sand, goes fishing, plays a whistle and rides a dinosaur - and his imagination takes over and the magic begins.”

Mummy and Me, by Katherina Manolessou

“This little frog is up with a hop and ready to spend the day swimming, making cakes and playing hide-and-seek, and all of it just with Mum..

“Based on the author’s relationship with her young daughter, this bright, fresh board book is the perfect size for little hands, small enough to take with you on your own day out, or snuggle up with at the end of a busy day. A beautiful book about a special bond, and the joy of spending the day with someone you love.”

T-Veg: the story of a carrot-crunching dinosaur, illustrated by Katherina Manolessou, written by Smriti Prasadam-Halls

“Reginald is a perfectly normal T-rex. He stomps around the jungle. He has a fierce and mighty roar. He gnashes his big, scary teeth. There’s just one thing that sets him apart - he’s a vegetarian!”

One Cheetah, One Cherry: a book of beautiful numbers, by Jackie Morris

“With playful words and beautiful animal paintings, this spectacular counting book features numbers up to ten in words and numerals, illustrated in watercolour, with gold and silver leaf, and including elephants, tigers, swans, mice and more.”

The Quiet Music of Gently Falling Snow, by Jackie Morris

Ahmed and the Feather Girl, by Jane Ray

“Ahmed is a poor orphan boy who lives with a travelling circus. His life is changed when he finds a beautiful egg in the forest, and brings it back to the circus. From the egg hatches a child, a little girl called Aurelia, a child who, as she grows, sprouts soft feathers that turn into wings.”

The Little Mermaid and other fishy tales, by Jane Ray

“Introducing the second magnificent volume of tales collected, retold and illustrated by Jane Ray. This volume, includes something for everyone: The Fisherman and His Wife, Whalesong, The Lobster Quadrille, A Ballad of John Silver and many more.”

“Did you know: A shark as long as a bus roamed the oceans? Hamsters with horns once burrowed the Earth? Giant armadillos grew to the size of a family car?

“Find out about the fascinating prehistoric beasts that once walked, swam and hunted across the Earth. Compare these with their closest modern relatives, or other living animals with amazing features.

“From cow-sized rodents to furry prehistoric rhinos - packed with beautiful pictures and amazing facts, essential stats and scale diagrams, this is the ultimate guide to prehistoric beasts!”

“In a town where a lot of poor people suffer and where there are a lot of miseries, a swallow who was left behind after his flock flew off to Egypt for the winter, meets the statue of the late ‘Happy Prince’, who in reality has never experienced true sorrow, for he lived in a palace where sorrow isn’t allowed to enter.

“Viewing various scenes of people suffering in poverty from his tall monument, the Happy Prince asks the swallow to take the ruby from his hilt, the sapphires from his eyes, and the golden leaf covering his body to give to the poor.”

Diary of a Time Traveller, illustrated by Nicholas Stevenson, written by David Long

“Meet some of the most interesting people in history in this time-travelling book that visits the Romans, Greeks, ancient Egyptians and more than 25 other exciting times and places.”

The Sea Tiger, by Victoria Turnbull

“The Sea Tiger is Oscar’s best friend, Oscar’s only friend. They do everything together - explore the ocean, visit the sea circus, even hitch a ride to the surface to look at the stars.

“But Oscar is not a sea tiger, and so it’s up to the Sea Tiger to help him find a new friend.”

“Pandora lives alone, in a world of broken things. She makes herself a handsome home, from all that people had left behind, but no one ever comes to visit.

“Then one day, something falls from the sky… a bird with a broken wing. As Pandora nurses the bird back to health, it begins to fly away each day, bringing a seed or small plant with him. Then one day, the bird doesn’t come back. Pandora is heartbroken. However, day by day, things begin to grow…”

The Big Book of Beasts, by Yuval Zommer

Find out why wild animals can’t be tamed, how to spot them and how to save them. Learn all about armadillos, bears, tigers, the Tasmanian Devil, mythical beasts, Ice-Age beasts, beasts on your street and more.

The Big Book of Bugs, by Yuval Zommer

Become a young bug spotter with this book about all sorts of creepy crawlies.