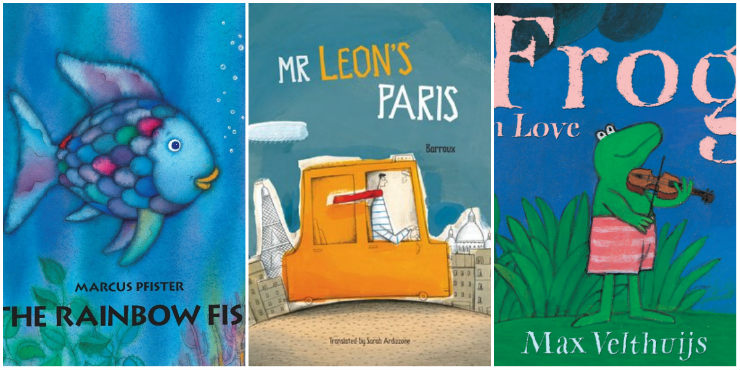 Saturday 30 September is International Translation Day. We’ve put together a list of some of our favourite translated books to share with your children.

International Translation Day was established by the International Federation of Translators in 1953 to recognise the work of translators and those who “endeavour to make the world a slightly smaller place by breaking down language barriers and allowing great literature to be enjoyed far more widely” (Rejoice Mabudafhasi, 2015).

“This title instructs the reader on how to interact with the illustrations to create imaginative images. The book invites the reader to push the yellow button on the cover and trigger a magical journey of colour, imagination, and virtual interactivity.”

The Story of the Little Mole Who Knew It Was None of his Business by Warner Holzwarth & Wolf Erlbruch, translated from German by Wolf Erlbruch

“Who did their business on the mole’s head? Join the intrepid mole as he sets out to find the culprit and exact revenge in his own little way.”

My Pictures After the Storm, by Éric Veillé, translated from French by Daniel Hahn

“What happens to a lion after the storm? His mane is swept into a dishevelled mess. What becomes of a pear after an elephant passes by? Pear jam! A frog after a spell? A prince. And the room after a battle? A big mess!”

“One beetle’s trash is another beetle’s treasure! When Babak the little dung beetle finds an egg, he’s determined to find the owner. But he soon finds that this mysterious egg doesn’t belong to the ostrich, frog, or snake. What kind of egg is it?!”

According to the New York Times, ‘it’s both sneaky and clever, intending first to make its readers laugh, but also slipping in a few facts as well.’

The Rainbow Fish, by Marcus Pfister, translated from German by J. Alison James

“The Rainbow Fish, with his shimmering scales, is the most beautiful fish in the ocean. But he is proud and vain and none of the other fish want to be his friend - until he learns to give away some of his most prized possessions.”

Chirri & Chirra, in the Tall Grass, by Kaya Doi, translated from Japanese by Yuki Kaneko

“Chirri & Chirra become very small, and so are able to explore the magical world hidden away in a mound of tall grass. Filled with friendly, industrious bees and equally inventive bugs, this is a book that brings the lovely particularity of life in Japan - marked by food and nature - to young readers.”

I Can’t Sleep, by Stephanie Blake, translated from French by Sarah Ardizzone

“Simon’s little brother can’t sleep without his special blanket. Simon usually tells Casper what to do. But he is going to have to be very, very brave to solve this problem.”

The Little Black Fish, by Ṣamad Bihrangī, Farsheed Mesqali, translated from the Persian by Azita Rassi, edited by Pippa Goodhart

“This is a story for all ages, speaking of the struggles that come in the pursuit of knowledge, but also of the rewards that can make daring to be different wonderful.”

A reissue of the 1974 winner of the Hans Christian Andersen Award.

Bear and the Wildcat, by Kazumi Yumoto & Komako Sakai, translated from Japanese by Cathy Hirano

“When the little bird dies, the bear is inconsolable. Full of grief, he locks himself in his house and ventures out again only when the smell of young spring grass blows through his window. He meets a wildcat and finally feels understood. As the cat plays her violin, the bear remembers all the fun he had with the little bird.”

“Mr Leon decides it’s time to explore the real places after which the streets in Paris are named. After putting his taxi up for sale, Mr Leon sets sail for Liberty Street and beyond. This in only the beginning of Mr Leon’s world adventures!”

One of BookTrust’s ‘favourites’: “Paris is beautifully rendered in moody beige, blue and orange in this retro-styled tale of French taxi driver Mr Leon and his multifarious taxi journeys around the city.”

Frog in Love, by Max Velthuijs, translated from German by Anthea Bell

The Secret of the Blue Glass, by Inui Tomiko, translated from Japanese by Ginny Tapley Takemori

“In a dusty library, in the quietest corner of a house in a Tokyo suburb, live the Little People: Fern and Balbo, Robin and Iris. Just a few inches high, sleeping in cigarette bozes and crafting shoes from old book jackets, they need only one thing from their Humans - a nightly glass of milk, served in a sparkling Blue Glass goblet, by a trusted young member of the Human family.

“But when the Second World War comes to Japan, bringing a dangerous new king of patriotism, both Humans and their beloved Little People face a world they could never before have imagined. It will take great love, bravery, and a rather loyal pigeon, to bring their unique families back together once more.”