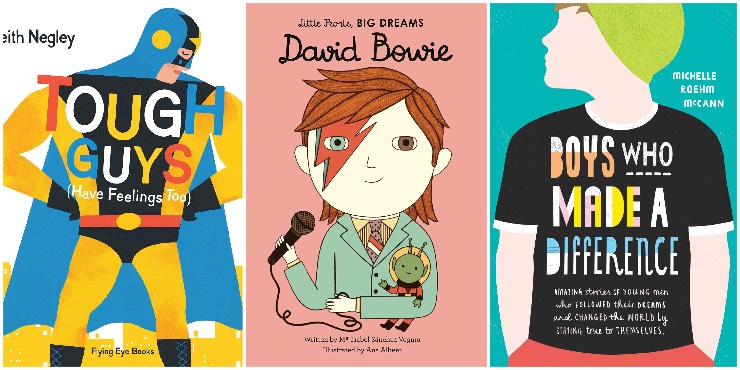 Tuesday 19 November is International Men’s Day 2019. Introduce your children to inspiring role models with some of our favourite biographies of boys and men.

Stories for Boys Who Dare to be Different: true tales of amazing boys who changed the world without killing dragons, by Ben Brooks & Quinton Winter

“Prince charming, dragon slayer, mischievous prankster. More often than not, these are the role-models boys encounter in the books they read at home and at school. As a boy, there is an assumption that you will conform to a stereotypical idea of masculinity. But what if you’re the introvert kind? What if you prefer to pick up a book rather than a sword? What if you want to cry when you’re feeling sad or angry? What if you like the idea of wearing a dress?

“There is an ongoing crisis with regards to young men and mental health, with unhelpful gender stereotypes contributing to this malaise. This book offers a welcome alternative narrative. It is a compilation of 100 stories of famous and not-so-famous men from the past to the present day, every single one of them a rule-breaker and innovator in his own way, and all going on to achieve amazing things.

Stories for Boys Who Dare to be Different 2: further true tales of amazing boys who changed the world without killing dragons, by Ben Brooks & Quinton Winter

“What have the footballer Kylian Mbappé, the philosopher Socrates and the singer Ed Sheeran all got in common? All three of them defied expectations - going against the grain and pursuing their dreams - despite a seemingly impossible barrage of obstacles and difficulties. Their stories are incredible, as are those of the tap-dancer Evan Ruggiero, the Pokémon creator Satoshi Tajiri, and the other inspirational boys who fill the pages of this extraordinary book. It’s books like these that can make a huge difference to parents and their children’s lives.”

“Meet 30 positive male role models from throughout history. From people of peace like Gandhi, to artists like David Hockney, musicians like Prince, poets like Kit Yan and fashion icons like Edward Enninful - all are talented and diverse. These men have fought conventional stereotypes to prove that modern day masculinity can be cool - and defined freely.”

What is Masculinity? Why Does it Matter? And Other Big Questions, by Jeffrey Boakye & Darren Chetty

“Masculinity is being discussed more than ever before, in a range of contexts. People talk about ‘toxic masculinity’, claim that there is a crisis in masculinity or argue that we need to ‘reclaim masculinity’. There have always been many ways of being a man, and many people who have claimed that there are correct and incorrect ways of being a man. This important and timely book looks at the big questions surrounding definitions of masculinity, and discusses where ideas of masculinity have come from and the effects of gender stereotyping. The authors and contributors share their experiences of and perspectives on masculinity and invite readers to think for themselves about the issues involved.”

“Our history books are full of great men, from inventors to explorers to presidents. But these great men were not always good men. It’s time for our role models to change.

“This book pays tribute to Mr. Rogers, Barack Obama, Hayao Miyazaki, and more: men whose masculinity is grounded in compassion and care. These men have varying worldviews and are accomplished in a range of fields, but they share important commonalities. They served their communities. They treated people with respect. They lifted others up. And they went on to create change, inspire others, and, indeed, do great things - not in spite of their goodness, but because of it.

“These men’s stories will educate, entertain, and encourage the next generation of writers, activists, entrepreneurs, and other leaders of all genders to do better and be better - to be truly groundbreaking.”

“Stephen Hawking: stargazer, physicist, icon. Author Nikki Sheehan explores the life of the inspirational scientist Stephen Hawking. This series throws the reader directly into the lives of modern society’s most influential figures, with striking black-and-white illustration along with timelines and never-heard-before facts.”

Tough Guys (have feelings too), by Keith Negley

“Did you know wrestlers have feelings? And knights. Even superheroes and ninjas feel sad sometimes. In fact everyone has feelings - especially dads who love their children!

“Children will love recognizing their feelings in Keith Negley’s bold illustrations which accompany a fun-to-read-aloud narrative. Parents can joyfully engage with children in a light-hearted discussion about emotions and how they affect us all.”

Boys Who Made a Difference, by Michelle Roehm McCann

“When it comes to making a difference, there’s no such thing as too young! Get ready to meet some incredible young men who followed their dreams and changed the world for the better, often by taking the path less travelled and staying true to themselves. From Wolfgang Amadeus Mozart to Nelson Mandela, Vidal Sassoon to Bob Dylan, Tony Hawk to Matt Groening, this collection features young men from across history and around the globe who have all achieved remarkable things.”

“Discover the life of David Bowie, the starman who dazzled audiences with his music. As a child, young David had a head full of songs and ideas. He was inspired by the pop and mod scenes in Britain to pick up the saxophone. After earning his stripes in some of the coolest bands in London, David splashed onto the solo scene. His songwriting talent and musical skill made him one of rock and roll’s all-time greatest artists.”

“Discover the life of Bruce Lee, the martial artist and Hollywood film star. Born in San Francisco but raised in Hong Kong, Bruce Lee was the child star of Hong Kong cinema. But, after getting into trouble as a teenager, his father sent him to live in America. Starring roles were hard to come by for Asian-American actors in Hollywood, but Bruce went on to act in blockbuster hits, featuring his skill as a martial artist.”

“Discover the life of Mohandas Gandhi, the father of India. As a young teenager in India, Gandhi led a rebellious life and went against his parents’ values. But as a young man, he started to form beliefs of his own that harked back to the Hindu principles of his childhood. Gandhi began to dream of unity for all peoples and religions. Inspired by this idea, he led peaceful protests to free India from British rule and unite the country - ending violence and unfair treatment. His bravery and free-thinking made him one of the most iconic people of peace in the world, known as Mahatma, meaning ‘great soul’.”

“Discover the life of Rudolf Nureyev, one of the greatest male ballet dancers of all time. Rudolf fell in love with dance as a child. But he was not allowed to go to ballet school until he was 17. There, he had to make up for lost time and hone his skills to compete with the other dancers. As a professional, he dazzled audiences with sensational performances and star power. He went on to become a world-renowned choreographer and master of perfection in dance.”