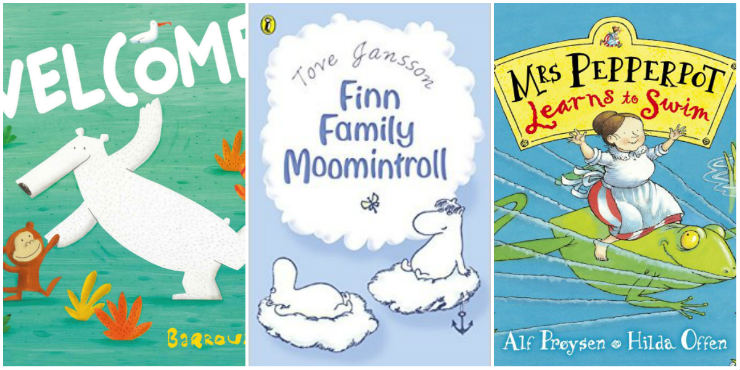 “When Polar Bear and his friends are swept away from their icy home, they hope to find refuge in a new land. But when they are turned away from one new place after another, they start to doubt that they will ever find somewhere they will be made welcome.”

The Story of Babar: the little elephant, by Jean de Brunhoff

“In this book, readers meet Babar for the first time and learn how the little elephant is forced by fierce hunters to run away to the big city.”

Toby and the Secrets of the Tree, by Timothée de Fombelle

“Toby’s world is under greater threat than ever before. A giant crater has been dug into the centre of the tree, moss and lichen invade the branches, and one tyrant controls it all. Leo Blue is holding Elisha prisoner and is hunting the grass people with merciless force, capturing all who stand in his way. Toby must fight back.”

“The year is 50BC, and all Gaul is occupied. Only one small village of indomitable Gauls still holds out against the invaders. But how much longer can Asterix, Obelix and their friends resist the mighty Roman legions of Julius Caesar? Anything is possible, with a little cunning plus the druid Getafix’s magic potions! Their effects can be truly hair-raising…”

“Finn Family Moomintroll is the second book in the cult classic Moomin series by Tove Jansson. A must-read for adults and children alike.

“Although they’re small, fat and shy creatures, Moomins have the most amazing adventures. It all begins when Moominpappa tries on a magic hat that makes exciting and funny things happen…”

Emil and the Detectives, by Erich Kästner and Walter Trier

“If his mother had known the adventures Emil was going to have in Berlin, she would never have let him go. But when his money goes missing on the train, Emil’s determination to get it back leads him to team up with the detectives he meets in Berlin.”

“Pippi is the only girl in the world who can do exactly what she likes. She is nine years old and lives in a cottage with a horse and a monkey. Her friends Tommy and Annika have to go to school and go to bed when they’re told, but they still have time to join Pippi on all her great adventures.”

“Mrs Pepperpot has a problem - a huge problem - she shrinks. And when she shrinks she finds herself in all sorts of trouble. Mrs Pepperpot is determined to practise her swimming so when all the village children go for a picnic in the mountains she goes to the pool in the wood. But disaster strikes.”

“A pilot stranded in the desert awakes one morning to see the most extraordinary little fellow standing before him. “Please,” asks the stranger, “draw me a sheep.”

“And the pilot realises that when life’s events are too difficult to understand, there is no choice but to succumb to their mysteries. He pulls out a pencil and paper … and thus begins this wise and enchanting fable that, in teaching the secret of what is really important in life, has changed the world forever for its readers.”