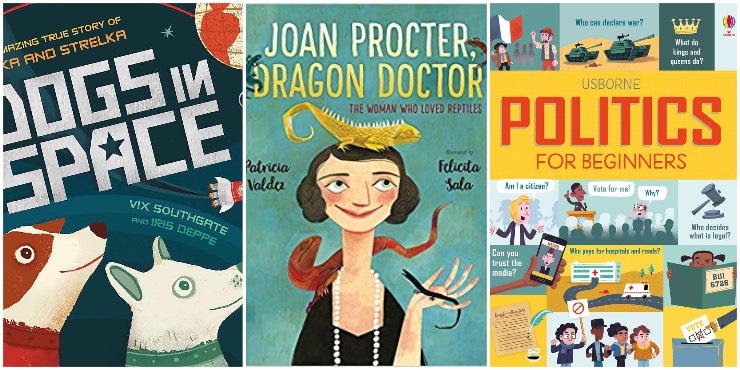 The School Library Association Information Book Award celebrates the best non-fiction for 7-16 year-olds each year. The winner will be announced in November as part of National Non-fiction November.

“In 1960, two stray dogs were plucked from the streets of Moscow to be the guinea pigs of manned space flight. Dogs in Space tells the incredible true story of these heroic strays - named Belka and Strelka. Selected from a number of potential canine cosmonauts, Belka and Strelka are put through their paces on the ground, as they practice rocket simulations and wearing spacesuits, before being launched into outer space as the first ever living creatures to successfully orbit the Earth.

“Miraculously, the dogs survive the mission and upon their return embark on a tour of the USSR, clad in their carefully tailored jumpsuits - one red, one green - becoming international celebrities in the process.”

“Hello, Horse gently introduces young children to Shannon, a friendly bay mare, and offers encouragement to those unfamiliar with or a little nervous of these large, beautiful creatures.

“The subtext is packed with practical tips, such as the right way to offer a carrot, and also covers their behaviour - horses’ need for company, for example. Tender words and art combine to create a warm and witty introduction to horses from the safety of the page.”

“At night when children are fast asleep and dreaming, another world awakens - the world of night. Night in a desert, night in a forest, even night in space, there are many night-time worlds for children to explore across our planet - and beyond.”

The Atlas of Heroes: a world of heroes from myth and legend, by Sandra Lawrence & Stuart Hill

“Cultures all over the world have great heroes and heroines whose exploits have made them the stuff of legend. In this illustrated atlas, explore some of the great figures of mythology and their incredible exploits.”

“Back in the days of long skirts and afternoon teas, young Joan Procter entertained the most unusual party guests: slithery and scaly ones, who turned over teacups and crawled past the crumpets…

“While other girls played with dolls, Joan preferred the company of reptiles. She carried her favourite lizard with her everywhere - she even brought a crocodile to school!

“When Joan grew older, she became the Curator of Reptiles at the British Museum. She went on to design the Reptile House at the London Zoo, including a home for the rumoured-to-be-vicious komodo dragons. There, just like when she was a little girl, Joan hosted children’s tea parties–with her komodo dragon as the guest of honour.”

“Mary loves stories, but the stories in her daydreams are far more thrilling than those in any book. After a troubled childhood, eighteen-year-old Mary runs away to Switzerland with the famous poet Percy Bysse Shelley, her step-sister in tow. One dark and stormy night at his house by the lake, they huddle around the fire, telling ghost stories. But Mary can imagine better than those!

“After learning about electricity that can make dead frogs twitch, she has a nightmare that triggers the birth of one of the greatest scary stories of all time: Frankenstein.”

When the Whales Walked and other incredible evolutionary journeys, by Dougal Dixon & Hannah Bailey

“An exquisitely illustrated exploration of the most incredible events in evolution, through 13 case studies. Discover a world where whales once walked, crocodiles were warm-blooded and rhinos ruled the Earth!”

“What is an election? Who gets to be Prime Minister or President? What does immigration mean? This essential introduction to politics for children answers all these questions and many more. Topics debated include capitalism, socialism and nationalism, terrorism, voting systems, free speech and human rights.”

The Silk Roads: a new history of the world, by Peter Frankopan & Neil Packer

“Peter Frankopan explores the connections made by people, trade, disease, war, religion, adventure, science and technology in this extraordinary book about how the east married the west with a remarkable voyage at its heart - the journey along the Silk Roads.

“From ancient world laws laid down by King Hammurabi and the mighty Persian empire, to terrifying huns, the rise of Europe, two world wars and politics today, the book moves through time and history sewing together the threads from different peoples, empires and continents into a phenomenal history of the globe.”

Suffragette: the battle for equality, by David Roberts

“The year 2018 marks a century since the first women won the vote in the United Kingdom, and this book tells the story of their fight. This is a tale of astounding bravery, ingenuity and strength. David’s conversational style is accessible and his artwork full of rich detail, bringing to life the many vivid characters of the Suffragette movement - from the militant activist and wheelchair user Rosa May Billinghurst to the world-famous Emmeline Pankhurst.”