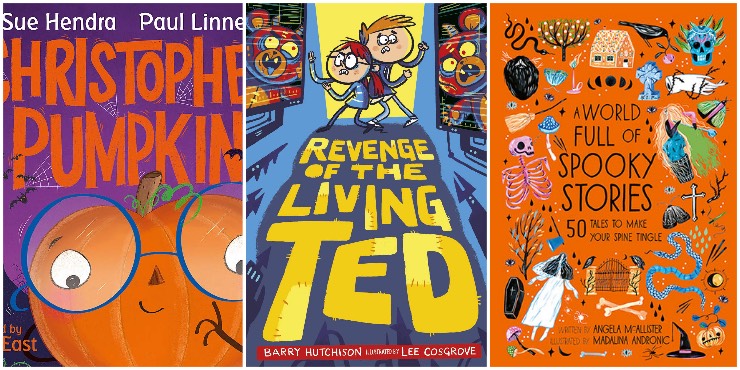 Halloween is coming! We’ve put together a list of new and classic children’s books about things that go bump in the night.

“A wonderfully Halloweeny new title in this brilliant board book series for preschoolers - with easy-to-grasp, shaped felt flaps, a mirror, a repetitive refrain and beautiful artwork.”

My Magical Witch, by Yujin Shin

“A first novelty board book for young children about a magical witch, with push, pull and turn mechanisms.”

“When a brother and sister go trick-or-treating, they compete to see who find the most bizarre and brilliant things. As they try to count all the hair-raising creatures, everything escalates until - it’s time for the Halloween feast. Happy Halloween, everyone!”

Pick a Pumpkin, by Patricia Toht

“It’s Halloween! Which means it’s time to dangle cobwebs and bats from the windows, put on costumes, and - most important of all - visit the pumpkin patch and pick out that perfect pumpkin! Then cart it home, scoop out the insides, carve a scary face, and finally light a candle inside, transforming it into a one-of-a-kind, glowing jack-o’-lantern.”

“Christopher Pumpkin is delighted to be magicked to life by a witch - until he discovers she wants him and the other pumpkins to get her creepy castle ready for the spookiest party ever! Chris just can’t bring himself to hang cobwebs and cook curried slugs - he’s much more into bunting and fairy cakes!”

“Little Miss Scary and her friends become stranded near a haunted house and encounter some spooky monsters including a mummy, a vampire and a werewolf! But when Mr Jelly accidentally chooses Big Foot’s boot as his hiding place from the monsters, he learns that not all monsters are as scary as they seem.”

“It’s nearly Halloween, so Wendy the Witch is taking her spooky friends out trick-or-treating - to all her favourite places! Follow Wendy, Mumford the Mummy, Zoe the Zombie and the rest of the creepy crew as they visit a zoo, a desert, an ocean and loads of other fun locations. Just make sure they make it home in time for the big Halloween party!”

Billy and the Mini Monsters: Monsters at Halloween, by Zanna Davidson & Melanie Williamson

“It’s Halloween and Billy can’t wait for the village Halloween Party. There’s just one problem: his Mini Monsters are at the party too! Can Billy find his monsters before anyone else does?”

The Phantom of the Underground, by Geronimo Stilton

“Cheese Niblets! There’s a strange ghost on the underground! Desperate for a big scoop, Geronimo decides to investigate and finds . the lingering smell of cat pee? Giant paw prints? A terrible meowing sound?! Is the ghost a giant cat, or could the mystery be hiding something more sinister?”

Revenge of the Living Ted, by Barry Hutchison & Lee Cosgrove

“Just when Lisa Marie and Vernon thought they’d seen the last of Grizz and his terrifying army of Halloween teddy bears, they’re kidnapped by megalomaniac Ursine Kodiak, who has an army of evil bears of his own. But there’s worse to come - Ursine has created an AI version of Grizz, who is now on the loose and intent on revenge. Can Lisa Marie and Vernon save the day - and the world - again? Hold on to your hats - fur is about to fly!”

“Paul returns home from school one day to discover a tiny ghost is living in the keyhole of his front door. He names him Zippel, and the little ghost is curious about everything, from food and clothes to how the toilet flushes! But Paul’s parents want to change the locks - can Paul find Zippel a new home in time?”

“Get ready for Halloween with this child-friendly collection of spooky stories from all over the world. Feel your pulse race and your skin tingle as you read about the fearsome witch Baba Yaga, the serpent woman from Spain, the rescue of Tam Lin from the bewitching Queen of the Fairies, how Father Death gets caught in the Enchanted Apple Tree, and the water-dwelling Bunyip from Australia. Make sure you have your candle ready as it’s sure to be a long night.”

The enduring classic about a witch and her cat, in which Meg goes to a spell party and accidentally turns all her friends into mice.

“This story is about a family of skeletons who spend a night on the town looking for people to haunt and riding on the skeleton animals at the zoo. With rhyming text and plenty of repetition, this book will build confidence in beginner readers.”

I Want to be in a Scary Story!, by Sean Taylor and Jean Jullien

“Monster wants to be in a scary story - but is he brave enough? Scary stories have creepy witches and creaky stairs and dark hallways and spooky shadows. Oh my goodness me! That is very scary. Maybe, a funny story would be better after all?”

Where the Bugaboo Lives, by Sean Taylor & Neal Layton

A brilliant ‘choose your own adventure’ style picture book where every page contains a fright to be overcome before you decide whether or not to face the bugaboo on the final pages.

“Bat’s cherries keep going missing. One by one, the precious red cherries are whisked away by mischievous animal tricksters behind Bat’s back. Bat fruitlessly tries to catch the culprit and rescue those poor cherries - all to no avail. Will the cherries ever be restored to their rightful owner?”

Room on the Broom, by Julia Donaldson & Axel Scheffler

“The witch and her cat fly happily over forests, rivers and mountains on their broomstick until a stormy wind blows away the witch’s hat, bow and wand. Luckily, they are retrieved by a dog, a bird and a frog, who are all keen for a ride on the broom. It’s a case of the more, the merrier, but the broomstick isn’t used to such a heavy load and it’s not long before - SNAP! It breaks in two! And with a greedy dragon looking for a snack, the witch’s animal pals better think fast.”