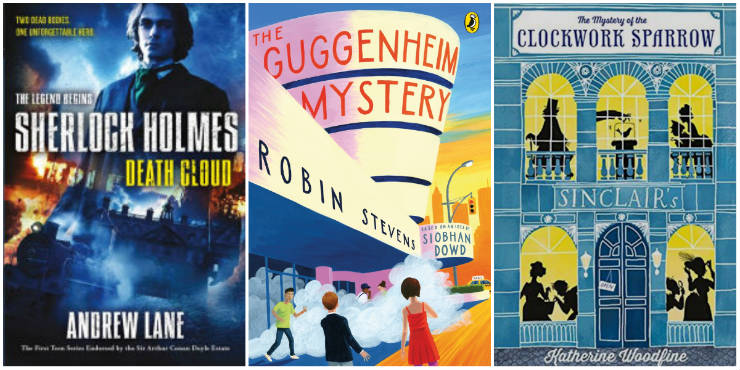 Is helping the Animal Agents solve the case for this year’s Summer Reading Challenge giving your child a taste for mystery? Or perhaps they’re wondering what book to read next to progress with the Challenge? We’ve made a list of our favourite detective books for children.

“When a dwarf comes into the office and leaves a package, Tim Diamond, the world’s worst private-detective, is faced with his toughest case yet. The office is ransacked and the package is found to contain simply a box of Maltesers. Who was the dwarf and why was he murdered shortly after his visit?”

Ted is a formidable detective whose brain runs on ‘its own unique operating system’. The series was started by the late Siobhan Dowd and is being capably continued by Robin Stevens.

In The London Eye Mystery, Ted and his older sister Kat investigate their cousin Salim’s disappearance from the attraction, and in The Guggenheim Mystery, he sets out to uncover the truth when his Aunt Gloria is blamed for the theft of a £9.8 million painting.

Murder Most Unladylike, by Robin Stevens

The first in a very popular series of five books about schoolgirl detectives Daisy Wells and Hazel Wong, described in the press as ‘a skilful blend of golden era crime novel and boarding school romp’:

“When Daisy Wells and Hazel Wong set up their very own deadly secret detective agency at Deepdean School for Girls, they struggle to find any truly exciting mysteries to investigate. But then Hazel discovers the Science Mistress, Miss Bell, lying dead in the Gym.

“She thinks it must all have been a terrible accident - but when she and Daisy return five minutes later, the body has disappeared. Now the girls know a murder must have taken place - and there’s more than one person at Deepdean with a motive.”

Mistakes Were Made, by Stephen Pastis

First in a series of six Timmy Failure novels:

“Meet Timmy Failure, founder of the ‘best’ detective agency in town - Total Failure, Inc. Timmy may only be 11, but with the help of his polar bear, Total, he already has plans for world domination. Plans that will make his mother rich and unpaid bills a thing of the past. And plans that will defeat Corrina Corrina, ‘The One Whose Name Shall Not Be Uttered’. But she’s not going away.”

Look Into My Eyes, by Lauren Child

The first in a series of seven from the new Children’s Laureate:

“Ruby Redfort is a genius code-cracker, a daring detective, and a gadget-laden special agent who just happens to be a 13-year-old girl. She and her slick side-kick butler, Hitch, foil crimes and get into loads of scrapes with evil villains, but they’re always ice-cool in a crisis.”

The Adventures of Tintin volume 1, by Herge

Aided by a wonderful cast of odd characters and his faithful dog, Snowy, intrepid, globetrotting reporter Tintin has lost none of his appeal since publication in the 1920s and remains one of the most popular comics of the 20th century. In this volume, he faces down danger in Russia and America.

Who Could That Be at this Hour?, by Lemony Snicket

Before he began recording the exploits of the Baudelaire orphans in A Series of Unfortunate Events, 13-year-old Lemony Snicket was apprenticed to a mysterious secret society and had many adventures of his own. Who Could That Be at this Hour? is the first of four books in the All the Wrong Questions series.

The Skulduggery Pleasant books have been so successful that Derek Landy has recently started a second series. In the first book of the first series:

“Stephanie’s uncle Gordon is a writer of horror fiction. But when he dies and leaves her his estate, Stephanie learns that while he may have written horror, it certainly wasn’t fiction. Pursued by evil forces intent on recovering a mysterious key, Stephanie finds help from an unusual source - the wisecracking skeleton of a dead wizard.”

Yes, this is exactly as amazing as it sounds.

Emil and the Detectives, by Erich Kästner & Walter Trier

Alone in an unfamiliar city and robbed of his belongings, Emil joins forces with a gang of street-wise young Berliners to become ‘Emil and the Detectives’ and recover the stolen money. Written by Erich Kästner in 1929, this is still a hugely popular book today.

Ottoline and the Yellow Cat, by Chris Riddell

Chris Riddell’s puzzle-solving and exceptionally inquisitive mistress of disguise, Ottoline, tackles mysteries in Big City with the help of her hairy friend, Mr Munroe. This is the first of four books.

Five on a Treasure Island, by Enid Blyton

Julian, Dick, Anne, George and best of the bunch, Timmy. First written in 1942, this series is still going strong. Their adventures take place during their boarding school holidays and petty criminals, ginger beer, lost treasure and smugglers’ tunnels seem never to be far away. Already read all 21? Try the Secret Seven or Five Find-Outers and Dog.

The Mystery of the Clockwork Sparrow, by Katherine Woodfine

The first book in the Sinclair’s Mysteries series, set in an Edwardian department store:

“You are cordially invited to attend the grand opening of Sinclair’s department store! Enter a world of bonbons, hats, perfumes and mysteries around every corner. Wonder at the daring theft of the priceless clockwork sparrow! Tremble as the most dastardly criminals in London enact their wicked plans! Gasp as our bold heroines, Miss Sophie Taylor and Miss Lilian Rose, crack codes, devour iced buns and vow to bring the villains to justice.”

Orphaned Sabrina and Daphne Grimm who have been sent to live in a strange town in New York State with their grandmother. They learn that they are descended from the Brothers Grimm and, like their forebears, it is their job to keep a parallel race of magical beings, the Everafters, in line. In this first book:

“The girls are pitted against giants, who have been rampaging through town in their search for an Englishman named Jack who is in jail for an unknown crime.”

Packed with mystery, detection and excitement while remaining true to the spirit of the original books, the Young Sherlock series is perfect for both Sherlock Holmes fans and Alex Rider devotees. The iconic detective is reimagined as a brilliant, trouble and engaging teenager. In this first book of eight:

“The year is 1868 and Sherlock Holmes is 14. His life is that of a perfectly ordinary army officer’s son: boarding school, good manners, a classical education. But all that is about to change. With his father suddenly posted to India and his mother ‘unwell’, Sherlock is sent to stay with his eccentric uncle and aunt in their vast house in Hampshire.”

‘Half the man, twice the lawyer’ is the tagline for John Grisham’s successful series for older children:

“When it comes to giving advice on divorce issues and impounded pets, 13-year-old Theodore Boone is first choice with his teachers and classmates. Theo knows more about the law than most lawyers. But he also knows he has no business getting involved in his home town’s first murder trial in years.”