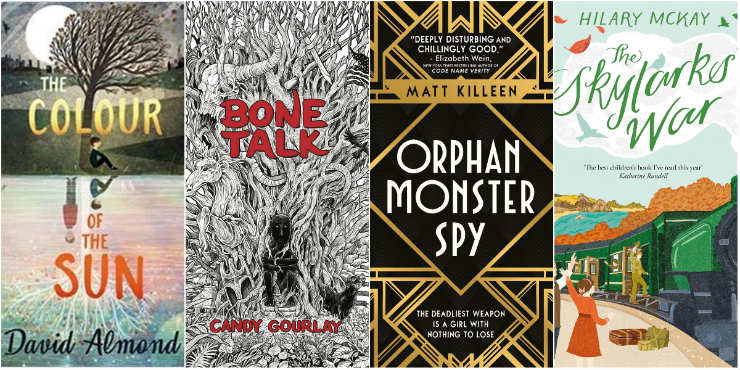 The Colour of the Sun, by David Almond

“One hot summer morning, Davie steps boldly out of his front door. The world he enters is very familiar - the little Tyneside town that has always been his home - but as the day passes, it becomes ever more dramatic and strange. A boy has been killed, and Davie thinks he might know who is responsible.

“He turns away from the gossip and excitement and sets off roaming towards the sunlit hills above the town. As the day goes on, the real and the imaginary start to merge, and Davie knows that neither he nor his world will ever be the same again.”

The judges say: “one of the most beautiful, transcendent books in the competition.”

“More than a hundred years ago, a boy named Samkad thinks he knows everything about the world. He knows the mountains he lives in. He knows his people. He knows his blood enemy, the Magili. And he wants to become a man, to be given his own shield, spear and axe to fight with. His best friend, Luki, wants all the same things - except she is a girl, and no girl has ever become a warrior.

“But everything changes when a new boy arrives in the village. He calls himself Samkad’s brother, yet he knows nothing of the ways of the mountain. And he brings news of a people called ‘Americans’, who are bringing war and destruction right to his home…”

The judges say: “a powerful, complex and fascinating coming-of-age novel.”

“Sarah has played many roles. Dutiful daughter. Talented gymnast. Persecuted Jew. Lost orphan. But now she faces her most challenging role of all. Now she must become the very thing she hates. For the only way she can survive as a spy at a boarding school for the cream of Nazi society is to become a monster like them. A monster who can destroy them.”

The Skylarks’ War, by Hilary McKay