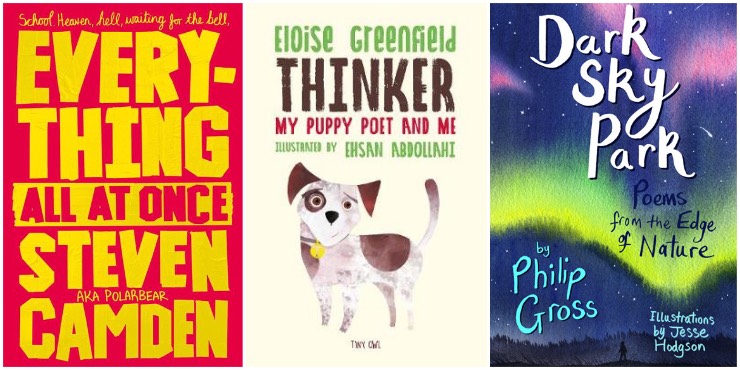 The shortlist for the 2019 CLiPPA (Centre for Literacy in Primary Poetry Award) has recently been announced. The award was launched in 2003 and is the only one for published poetry for children.

“It’s 1991. Charlie Bell is still mourning his father, and struggling to figure out how he feels for his best (girl) friend, CJ. When he gets into trouble one too many times, he’s packed off like the Fresh Prince to stay with his grandparents for the summer.

“There his cousin Roxie introduces him to a whole new world: basketball. A legend on the courts is born. But can Charlie resist when trouble comes knocking once again?”

Everything All at Once, by Steven Camden

“Zooming in across our cast of characters, we share moments that span everything from hoping to make it to the end of the week, facing it, fitting in, finding friends and falling out, to loving lessons, losing it, and worrying, wearing it well and worshipping from afar.

“In this collection of poems, Steven Camden’s poems speak to the kaleidoscope of teen experience and life at ‘big school’.”

Thinker: my puppy poet and me, by Eloise Greenfield & Ehsan Abdollahi

“Thinker isn’t just an average puppy. He’s a poet. So is his owner, Jace, and together they turn the world around them into verse. There’s one thing they can’t share, though: Thinker isn’t allowed to go to school. That is, until Pets’ Day. But the puppy poet finds it surprisingly hard to keep quiet.”

“Dark Sky Park is a poetry collection full of fascinating life forms in extreme environments, from the deep sea bed to right beneath our noses.

“Written by one of our leading poets, Philip Gross, with lovely lively illustrations by Jesse Hodgson, these are poems that look at the world with a scientist’s eyes. Philip worked with friends from the National Museum of Wales, leading workshops and discovering the lives of extraordinary creatures.

“Whatever age you are, if you have an enquiring mind, if you love the play of words and care about the earth, this book is for you.”

A Kid in My Class, by Rachel Rooney & Chris Riddell

“They’re all here… every kid in the class has their own poem. The pushy one, the shy one. The whizz kid and the daydreamer. The best friender and the kid who runs in his wheelchair. The tough kid, the poet. And not forgetting the class hamster.”