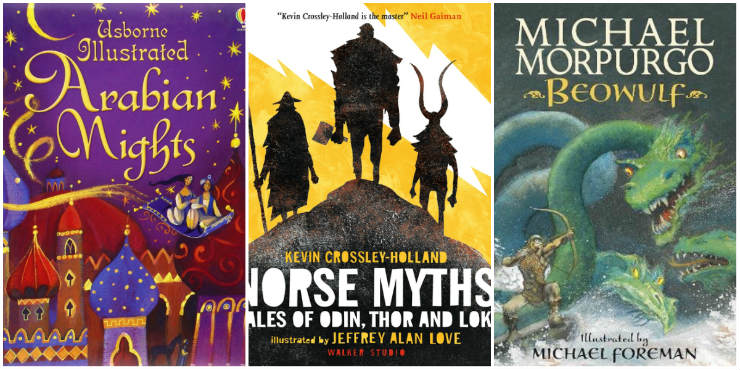 The BBC Civilisations Festival runs from 2 - 11 March 2018. It aims to introduce a new generation to artworks, objects and treasures from the ancient world.

In the first book of the Chronicles of Ancient Darkness series:

“It’s 6000 years ago and evil stalks the land. Only Torak, a 12-year-old boy, and his beautiful wolf cub companion can defeat it. In this adventure, Torak and Wolf are joined by an incredible cast of characters as they battle to save the world.”

“The gods of the Vikings come to life as never before in this extraordinary illustrated anthology. These dramatic, enthralling and atmospheric tales are based on the Scandinavian myth cycle - one of the greatest and most culturally significant stories in the world - and tell of Odin with his one eye, Thor with his mighty hammer and Loki, the red-haired, shape-shifting trickster.

“The year is 50BC, and all Gaul is occupied. Only one small village of indomitable Gauls still holds out against the invaders. But how much longer can Asterix, Obelix and their friends resist the mighty Roman legions of Julius Caesar? Anything is possible, with a little cunning plus the druid Getafix’s magic potions! Their effects can be truly hair-raising…”

These fun explorations of history surely need no introduction by now.

The Eagle of the Ninth, by Rosemary Sutcliff & C. Walter Hodges

In the first book of The Eagle Sequence:

“The Ninth Legion marched into the mists of northern Britain - and never came back. Marcus Aquila has to find out what happened to his father and the Ninth Legion, and embarks on a hazardous quest into the unknown territory of the north.”

“Gwyna is just a small girl when she is bound in service to Myrddin the bard - a traveller and spinner of tales. But Myrddin transforms her - into a goddess, a boy warrior, and a spy. Myrddin needs Gwyna to help him turn the leader of a raggle-taggle war-band into King Arthur.”

Rumble with the Romans!, by Gary Northfield

The first book in the fantastic Julius Zebra series.

“From a smelly watering hole deep in the heart of the Serengeti to the ferocious clamour of the Colosseum, join Julius Zebra and his motley menagerie of friends as they gear up to be gladiators! Only if they win the love of the Roman crowds will they win back their freedom. But do Julius and his pals have what it takes to succeed in a world where only the meanest and toughest survive?”

“In fifth-century Denmark, a murderous monster stalks the night, and only the great prince of the Geats has the strength and courage to defeat him. This work retells and illustrates Beowulf’s terrifying quest to destroy Grendel, the foul fiend, a hideous sea-hag and a monstrous fire-dragon.”

“A collection of tales from the Arabian nights retold for younger readers, this book also includes a short history of the origins of the legendary stories.”

The Thieves of Ostia, by Caroline Lawrence

In the first in the Roman Mysteries series:

“Flavia Gemina is brilliant at finding things, so she solves mysteries. The daughter of a ship’s captain living in Ostia in AD 79, she acquires three friends who help her work out who severed the heads of the watchdogs that guard people’s homes.”