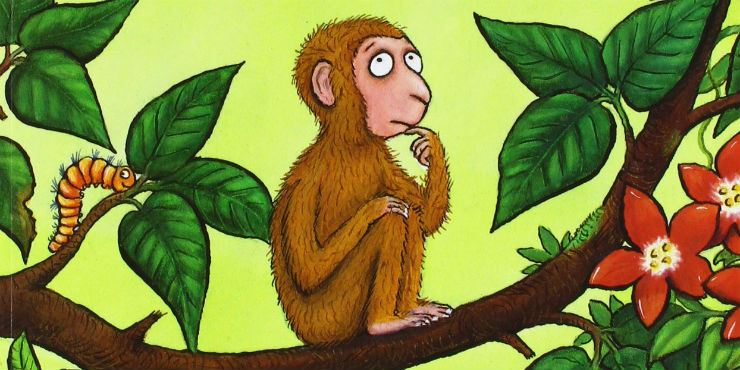 Board books about monkeys

How can a book with just three words (“Bobo”, “mummy” and most frequently of all “Hug”) evoke such tenderness and pathos? Because Jez Alborough is a genius, that’s why.

There’s a jauntiness to the rhyming text in this funny board book, which documents the daily routines of the average toddler.

This little monkey by Lucy Lyes

A good sturdy touchy-feely board book from Ladybird. And it rhymes too.

Monkey do! by Allan Ahlberg

A delightfully entertaining story in rhyme about a little monkey who pockets the zookeeper’s key, escapes from the zoo and begins a night of escapades.

Monkey and the little one by Claire Alexander

A very sweet book about friendship, this would also be an excellent choice to share with a child whose younger brother or sister just wants to be near them ALL the time.

Written and illustrated in quintessential Donaldson-Scheffler style, a butterfly helps a little monkey to search for his mummy.

Monkey and me by Emily Gravett

A little girl and her monkey toy swing through this book visiting and copying the animals they meet in Emily Gravett’s first book. It won her a New Illustrator award and feels as fresh today as it did back in 2007. It’s a delight from the off.

Now remind me, how do you open a banana?

A colourful story with lovely bright illustrations, perfect for children who have just started to read alone. This cheeky monkey is on a bicycle, by the way and he races against a girl driving a car.

Mr Monkey and the magic tricks by Linda Chapman

The Twits by Roald Dahl

Have you met the Muggle Wump monkeys? Together with the Roly Poly bird they hatch a plan to teach the truly dreadful Mr and Mrs Twit a lesson. This is a beautiful picture book edition of Dahl’s classic story, perfect for showing off Quentin Blake’s iconic illustrations. We’ve got smaller editions too of course.

We have several titles about Pippi Longstocking and her monkey. She is “the only girl in the world who can do exactly what she likes,” and though only nine years old she “lives in a cottage with a horse and a monkey.”

Published by Barrington Stoke, this story of a naughty monkey, adopted by a family after he escapes from the zoo, has a “dyslexia friendly” sticker on it, so it would be great for struggling readers.

Felix Horatio Stowe has several normal pets, but feeling his life is dull without something more exotic, he determines to adopt a monkey via the internet.