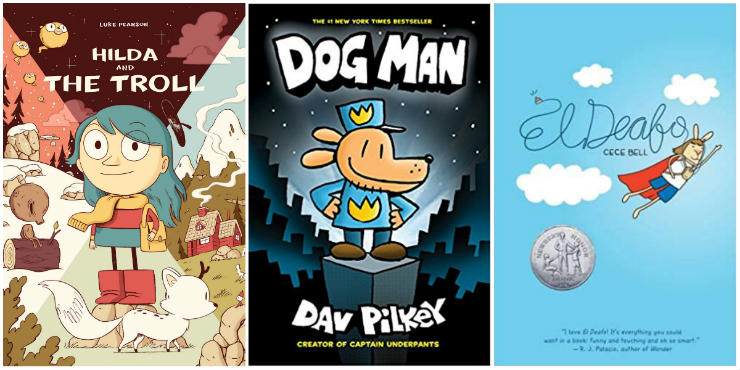 Did you know that comic books count towards the Summer Reading Challenge? We’ve picked out some of our favourites to help you choose.

Hilda and the Troll, by Luke Pearson

The first in an increasingly popular series which have been adapted for release on Netflix this autumn.

“While on an expedition to illustrate the magical creatures of the mountains around her home, Hilda spots a mountain troll. As the blue-haired explorer sits and sketches, she slowly starts to nod off. By the time she wakes up, the troll has totally disappeared and, even worse, Hilda is lost in a snowstorm. On her way home, Hilda befriends a lonely wooden man, and narrowly avoids getting squashed by a lost giant.”

First in a series of hilarious slapstick noir adventures with two dog detectives which originated in the Phoenix magazine.

“Kirk Bergman and Duncan McBoo are pedigree police: the finest canine cops in all Muttropolis. And they’re never short of work. The city is heaving with cunning crooks and malevolent mongrels who would sell their own mother for a bone. Join our dog detectives as they chase leads, sniff out crime, and collar the bad guys.”

First in a fun supernatural mystery and adventure series set at a summer camp for ‘Hardcore Lady Types’ known as Lumberjane Scouts.

“Friendship to the max! Jo, April, Mal, Molly and Ripley are five best pals determined to have an awesome summer together … and they’re not gonna let any insane quest or an array of supernatural critters get in their way! It’s Buffy the Vampire Slayer meets Gravity Falls as five butt-kicking, rad teenage girls wail on monsters and solve a mystery with that has the whole world at stake.”

Crime-busting adventures from the author/illustrator of Captain Underpants.

“When Greg the police dog and his cop companion are injured on the job, a life-saving surgery changes the course of history. With the head of a dog and the body of a human, Dog Man has a nose for justice. But can he resist the call of the wild to answer the call of duty?”

Monkey vs Bunny, by Jamie Smart

Another Phoenix success. Warfare, wordplay and cute forest animals - what’s not to love?

“The British Space Agency have sent a monkey into space! But all does not go well with the flight, and Monkey’s spaceship only just about clears the first hilltop before crash-landing in a peaceful forest.

“Thinking he is on a new planet, Monkey decides to claim it for his own. But the other forest creatures have something to say about that. Namely one, ‘Bunny’!”

The Sleepwalkers, by Viviane Schwarz

Bizarre and brilliant standalone graphic novel from the author of the Tiny Cat picture books.

“It is almost time for the old and tired Sleepwalkers to return to the waking world. But before they go, they must conjure and train three new replacements. For who else will look after the Sleepwalking House and be there to answer the call of a child frozen stiff with fear, trapped in a nightmare?”

Just two titles from the funny and educational Blue Peter Award-nominated Corpse Talk series, where the corpses of famous people are dug up and interviewed.

This award-winning and inspirational book about being different is on the 2018 Read for Empathy list.

The Adventures of Tintin: Volume 1, by Hergé

The first collection of the early adventures of the courageous young Belgian reporter and his odd band of friends. We also have single stories such as Tintin in America.

The first of nearly 40 comical tales about a village of Gauls fighting off Roman occupation.