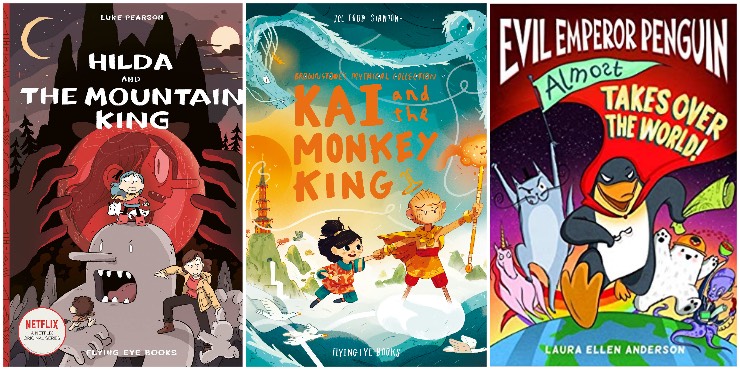 Have a look at the exciting stories and amazing artwork to be found in some of our latest comic books. Although these ones are aimed at children, we reckon grown-ups will also enjoy flicking through!

Latest in the hugely successful series from the author of Captain Underpants.

“Petey the Cat is out of jail, and he has a brand-new lease of life. While Petey’s reevaluated what matters most, Li’l Petey is struggling to find the good in the world. Can Petey and Dog Man stop fighting like cats and dogs long enough to put their paws together and work as a team? They need each other now more than ever – Li’l Petey (and the world) is counting on them!”

The Amazing World of Gumball: Adventures in Elmore, by Ben Bocquelet

“The gang’s all here! Join Gumball, Darwin, Anais, Carrie, and all your favourite friends from Cartoon Network’s hit television series The Amazing World of Gumball in these hilarious adventures throughout the town of Elmore.”

Tamsin and the Dark, by Neil Cameron & Kate Brown

From The Phoenix comic story magazine, this is the sequel to Tamsin and the Deep.

“Tamsin Thomas discovered that she is the Last Pellar, the ancestral protector of Cornwall - and she’s the holder of a magical staff, which gives her the power to fly. But now, Tamsin must face a new and ancient evil. Deep in the disused mines of Cornwall, there is a dark power lurking. And very soon, Tamsin’s brother starts to behave very strangely indeed. Tamsin will need all her courage to overcome this new danger.”

Bunny vs Monkey: Apocalypse …and other surprising stories!, by Jamie Smart

The latest in the popular series.

“Everything’s gone wrong! The woods normally echo with the sounds of Bunny and Monkey fighting, but this time they are facing their greatest danger yet - the actual apocalypse!”

Smart is also the creator of Looshkin and highly-illustrated junior novel Flember: the secret book.

Kai and the Monkey King, by Joe Todd-Stanton

The latest in the Brownstone’s Mythical Collection series.

“When Kai grows tired of her bookish mum not being adventurous enough for a Brownstone, she decides to seek out the mischievous and rebellious Monkey King - who she’s always been told to stay away from. Will he bring her the adventure she craves, or will he cause her more trouble than he’s worth?”

The Unicorn Whisperer, by Dana Simpson

The Phoebe and Her Unicorn series began online and later became a newspaper comic strip in the US. This is the latest title.

“What could be more magical than being best friends with a unicorn? For 9-year-old Phoebe Howell and her sparkling companion, Marigold Heavenly Nostrils, every day is an adventure. But it isn’t always easy. In this latest installation of Dana Simpson’s award-winning Phoebe and Her Unicorn series, Phoebe navigates the challenges of school life while being pulled into plenty of curious and entertaining adventures with her vain but endearing best friend.”

Hilda and the Mountain King, by Luke Pearson

The Hilda series is SO good. Strange and magical characters mingle in the bustling city of Trolberg. Wonderful for fans of the Moomins and Stuido Ghibli. The series has now been adapted for Netflix.

“Hilda and the Mountain King takes off from the cliff hanger in Hilda and the Stone Forest that left you waiting breathlessly! We rejoin our heroine for her latest adventure just as she awakes to find herself in the body of a troll! Her mother is worried sick, and is perplexed by the strange creature that seems to have taken Hilda’s place. Now, both of them are in a race to be reunited before Ahlberg and his safety patrol get the chance to use their new secret weapon to lay waste to the trolls, and Hilda along with them!”

Latest in the Evil Emperor Penguin series from the author-illustrator of Amelia Fang.

The Corpse Talk series from The Phoenix Presents is non-fiction and takes the form of interviews with deceased historical figures.

“A collection of different comics taken from the issues of The Phoenix comic, this compendium brings together different humorous, informative, action-packed and brain-teasing stories into one mega-comic book!”

Many of our libraries have physical copies of The Phoenix story comic too!