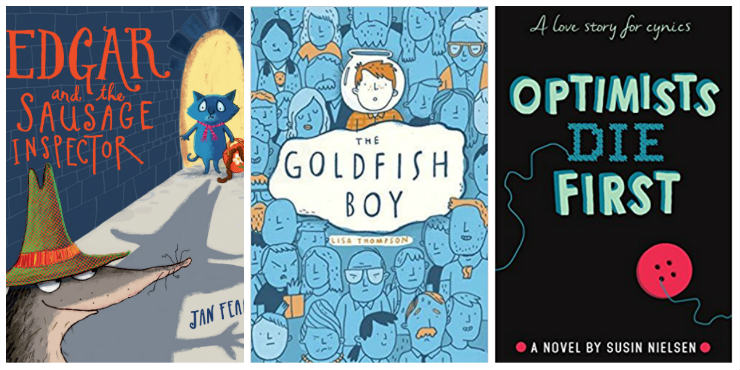 The highly-respected Children’s Book Award, organised by the Federation of Children’s Book Groups, is the only national award for children’s books that is voted for entirely by children. Any child in the UK can vote online for their favourites from any of the three categories - Younger Children, Younger Readers, and Older Readers - by midday on Friday 18 May. The winners will be announced at a glittering awards ceremony in London on Saturday 9 June.

“A truly unmissable, hilarious adventure about a daddy mole who has mislaid his spectacles. Morris can’t find them anywhere. So, he decides to go on without them, trusting his instincts to lead him the right way home to his waiting family and delicious dinner of worm noodles. ‘Mrs Mole, I’m homeeee!’ he sings - as he burrows right into some poor unsuspecting rabbit family’s hole. Oh dear. Without his spectacles, Morris really can’t see a single thing - how will he ever get home?”

Edgar and the Sausage Inspector, by Jan Fearnley

“Edgar and Edith are hungry, and it’s up to Edgar to bring home something tasty. But just when Edgar finds some delicious sausages, they are taken by The Inspector, a very important-looking rat with a big hat. Poor Edgar and Edith are left with nothing but dry crackers and pickles for dinner. That is, until one day, when The Inspector is all fattened up, and Edgar does some inspecting of his own.”

I Dare You, by Reece Wykes

“Two bored gorillas decide to play a game of dares. Eating dares. Who will end up the big-bellied winner, and who the sore-bellied loser? This dry, funny picture book debut is pitch perfect for children who love outsmarting their friends.”

The Goldfish Boy, by Lisa Thompson

“12-year-old Matthew is trapped in his bedroom by crippling OCD, spending most of his time staring out of his window as the inhabitants of Chestnut Close go about their business. Until the day he is the last person to see his next door neighbour’s toddler, Teddy, before he goes missing. Matthew must turn detective and unravel the mystery of Teddy’s disappearance - with the help of a brilliant cast of supporting characters.”

The Explorer, by Katherine Rundell

I Have No Secrets, by Penny Joelson

“Jemma knows who did the murder. She knows because he told her. And she can’t tell anyone.

“Fourteen-year-old Jemma has severe cerebral palsy. Unable to communicate or move, she relies on her family and carer for everything. She has a sharp brain and inquisitive nature, and knows all sorts of things about everyone. But when she is confronted with this terrible secret, she is utterly powerless to do anything. Though that might be about to change.”

Read Emily’s review of I Have No Secrets →

“Petula has avoided friendship and happiness ever since tragedy struck her family and took her beloved younger sister Maxine. Worse, Petula blames herself. If only she’d kept an eye on her sister, if only she’d sewn the button Maxine choked on better, if only.

“Now her anxiety is getting out of control, she is forced to attend the world’s most hopeless art therapy class. But one day, in walks the Bionic Man: a charming, amazingly tall newcomer called Jacob, who is also an amputee. Petula’s ready to freeze him out, just like she did with her former best friend, but when she’s paired with Jacob for a class project, there’s no denying they have brilliant ideas together - ideas like remaking Wuthering Heights with cats. But Petula and Jacob each have desperately painful secrets in their pasts - and when the truth comes out, there’s no way Petula is ready for it.”

“There are no secrets in Saintstone. Imagine a world where your every action, your every deed, is marked on your skin for all to see. And Leora has something to hide.

“Ink is a story about love, loyalty and the desire to live forever. It’s a tale that gets under your skin.”