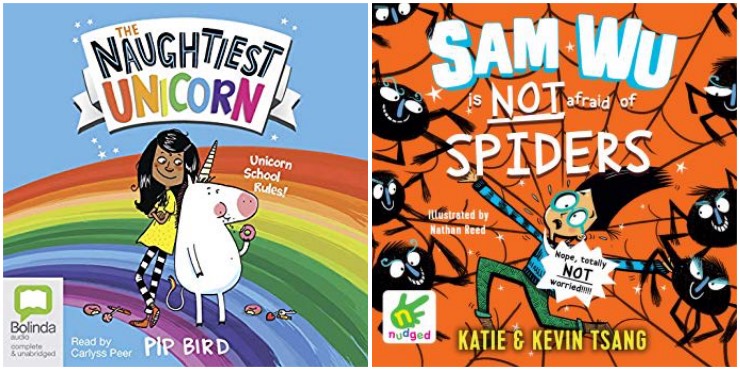 The Naughtiest Unicorn, by Pip Bird, read by Peer Carlyss

“Mira can’t wait to start Unicorn School. (Her big sister goes and won’t stop going on about it). But when Mira arrives on her first day all the unicorns are gone - except Dave! Dave isn’t quite the sparkly unicorn Mira was expecting to find at the end of the rainbow - he’s more grumpy than glittery, more interested in lunch than magical Quests and he always runs off when Mira tries to ride him - but Mira’s not going to let that get her down. Along with her new friends and their (much more glittery) unicorns, she is determined to be the best at Quests and protect the special unicorn world!”

“Have you ever wondered what happened to Tracy Beaker? She’s a mum now - and it’s her daughter Jess who’s telling the story. Jess looks like a mini version of her mum - but she’s not quite as fiery. Well, not often.

“Jess and Tracy are living a hand-to-mouth existence on a tough housing estate, but Tracy meets up with someone from her past and their whole lives are turned upside down.”

“Nobody visits Eerie-on-Sea in the winter. Especially not when darkness falls and the wind howls around Maw Rocks and the wreck of the battleship Leviathan, where even now some swear they have seen the unctuous Malamander creep.

“Herbert Lemon, Lost-and-Founder at the Grand Nautilus Hotel, knows that returning lost things to their rightful owners is not easy - especially when the lost thing is not a thing at all, but a girl. No one knows what happened to Violet Parma’s parents 12 years ago, and when she engages Herbie to help her find them, the pair discover that their disappearance might have something to do with the legendary sea-monster, the Malamander.

“Eerie-on-Sea has always been a mysteriously chilling place, where strange stories seem to wash up. And it just got stranger!”

Sam Wu is NOT Afraid of Spiders, by Katie & Kevin Tsang, read by Daniel York Loh

“Sam Wu is not afraid of anything. Well, maybe some things. Like ghosts, sharks - the dark’s pretty worrying too. And not to mention spiders! But Sam’s not going to let anyone know. And so when Tulip, the school tarantula, disappears from her cage, Sam decides it’s up to him and his friends to save the school from the eight-legged escapee.”

The Garden of Lost Secrets, by A. M. Howell, read by Lucy Scott

“October, 1916. Clara is sent to stay with her formidable aunt and uncle in the grounds of a country estate. She soon discovers that her new surroundings hold secrets: a locked room and a hidden key, and a mysterious boy who only appears in the gardens at night. But can Clara face up to her own secrets, and a war she’s desperate to forget?”

The Bolds on Holiday, written and read by Julian Clary

“It’s the summer holidays, and the hairiest family in Teddington decide to take a well-earned holiday by the seaside. With their extended hyena family in tow, they head on down to Cornwall for a spot of camping. But it’s never long before trouble sniffs these hyenas out, and Bobby is mistaken for a pup and snatched by a wicked dognapper. The Bolds will need all their ingenuity to hunt her down and rescue all the pilfered pooches. But can these hyenas-in-disguise save the day, without letting the cat out of the bag?”

“Alex Rider is trying to get his life back on track after the traumatic events of his last mission. But even Alex can’t fight the past - especially when it holds a deadly secret.”

The Restless Girls, by Jessie Burton, read by Thandie Newton

“For her twelve daughters, Queen Laurelia’s death in a motor car accident is a disaster beyond losing a mother. Their father, King Alberto, cannot bear the idea of the princesses ever being in danger and decides his daughters must be kept safe at all costs. Those costs include their lessons, their possessions and, most importantly, their freedom.

“But the eldest, Princess Frida, will not bend to his will without a fight and she still has one possession her father can’t take: the power of her imagination. And so, with little but wits and ingenuity to rely on, Frida and her sisters begin their fight to be allowed to live.”

Cookie! and the Most Annoying Boy in the World, written and read by Konnie Huq

“Cookie’s best friend in the whole world is moving to Solihull because one of her dads has a new job there. Solihull?! Where even is that?! Cookie begs her parents for a pet to fill the void but they have given her an absolute NO. It would be way too expensive and way too messy. But Cookie visits the pet shop anyway and sets her heart on the sweetest cutest kitteniest kitten ever: Bluey.

“But then - DISASTER! The most ANNOYING boy she’s ever met in her entire nine years goes into the pet shop, buys Bluey and renames her Nigel! And then he joins her year at school! And if that wasn’t bad enough, he moves in next door to her. AAAAGGGGHHHHH!

“But it’s not all bad - Cookie gets the chance to go on her favourite TV show, Brainbusters. It’s only a chance though - she’ll have to win the school science competition first. It shouldn’t be too hard - all she has to do is keep her head down, and not get too over-excited.”