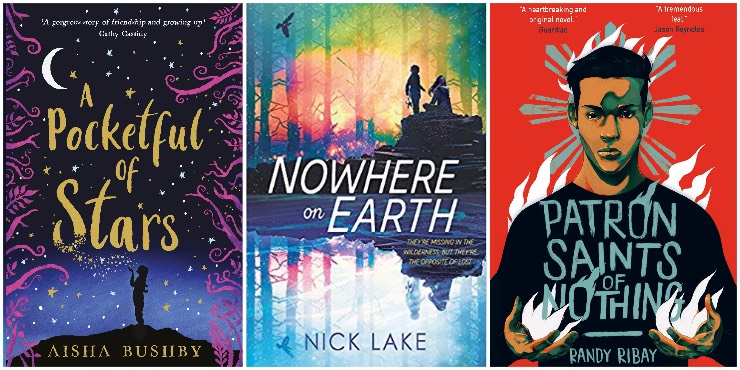 “A boy comes to terms with his identity as a mixed-race gay teen - then at university he finds his wings as a drag artist, The Black Flamingo. Sometimes, we need to take charge, to stand up wearing pink feathers - to show ourselves to the world in bold colour.

“I masquerade in makeup and feathers and I am applauded.”

A Pocketful of Stars, by Aisha Bushby

“Can piecing together the past help you change the present?

“Safiya and her mum have never seen eye to eye. Her mum doesn’t understand Safiya’s love of gaming and Safiya doesn’t think they have anything in common. As Safiya struggles to fit in at school she wonders if her mum wishes she was more like her confident best friend Elle.

“But then her mum falls into a coma and, when Safiya waits by her bedside, she finds herself in a strange alternative world that looks a bit like one of her games. And there’s a rebellious teenage girl, with a secret, who looks suspiciously familiar.”

“I’m Allison. I’m here because I’ve nowhere else to go.”

“Allison is alone, Marla is alone. Soon they will come together.

“Allison has run away from home and takes refuge in a shed in a house she thinks is abandoned. Marla lives in that house and thinks Allison is a friend from her past called Toffee. What follows is an ‘exploration of identity, mental health & friendship’ and a realisation that “‘We’re alone together.’”

“17-year-old Dinah needs to leave her home, the weird commune where she grew up. She needs a whole new identity, starting with how she looks, starting with shaving off her hair, her ‘crowning glory’. She has to do it quickly, because she has to go now.

“Dinah was going to go alone and hitch a ride down south. Except, she ends up being persuaded to illegally drive a VW campervan for hundreds of miles, accompanied by a grumpy man with one leg. This wasn’t the plan. But while she’s driving, Dinah will be forced to confront everything that led her here, everything that will finally show her which direction to turn.”

“When Louisiana Elefante’s granny wakes her up in the middle of the night to tell her that the day of reckoning has arrived and they have to leave home immediately, Louisiana isn’t overly worried. After all, Granny has many middle-of-the-night ideas. But this time, things are different. This time, Granny intends for them never to return.

“Separated from best friends Raymie and Beverly, Louisiana struggles to oppose the winds of fate (and Granny) and find a way home. But as Louisiana’s life becomes entwined with the lives of the people of the small Georgia town in which they find themselves - including a surly motel owner, a walrus-like minister and a mysterious boy with a crow on his shoulder - she starts to worry that she is destined only for goodbyes.”

“1814: Mary Godwin, the 16-year-old daughter of radical socialist and feminist writers, runs away with a dangerously charming young poet - Percy Bysshe Shelley. From there, the two young lovers travel a Europe in the throes of revolutionary change, through high and low society, tragedy and passion, where they will be drawn into the orbit of the mad and bad Lord Byron. But Mary and Percy are not alone: they bring Jane, Mary’s young step-sister. And she knows the biggest secrets of them all”

“Stepsister takes up where Cinderella’s tale ends. We meet Isabelle, the younger of Cinderella’s two stepsisters. Ella is considered beautiful; stepsister Isabelle is not. Isabelle is fearless, brave, and strong-willed. She fences better than any boy, and takes her stallion over jumps that grown men fear to attempt. It doesn’t matter, though; these qualities are not valued in a girl. Others have determined what is beautiful, and Isabelle does not fit their definition.

“Isabelle must face down the demons that drove her cruel treatment of Ella, challenge her own fate and maybe even redefine the very notion of beauty.”

Lenny’s Book of Everything, by Karen Foxlee

“Lenny Spink is the sister of a giant. Her little brother Davey won’t stop growing - and at seven is as tall as a man.

“When they receive their monthly instalment of ‘Burrell’s Build-It-at-Home Encyclopedia’ set, fun and excitement burst into Lenny and Davey’s lives. The amazing, mysterious entries in the book’s pages give them a way to dream of escape: Lenny vows to become a beetle expert, while Davey decides he will run away to Canada and build a log cabin. But as Davey’s disease progresses, the siblings’ richly imagined world becomes harder to cling to.”

Nowhere on Earth, by Nick Lake

“16-year-old Emily and her little brother Aidan are onboard a plane bound for Anchorage. When the plane crashes, both kids and the pilot barely escape with their lives and are left to fight for survival in the Alaskan wilderness. But there is worse to come - Emily and Aidan are being chased, and their shady, unknown pursuers are closing in.

“As the kids go on the run, Emily finds herself in greater danger than she could have imagined. Because nothing in her life is what it seems - not even the things she holds dearest of all.”

“Things are getting tense at home for Nicky and Kenny. Mum’s coming to visit and it’ll be the first time they’ve seen her in years. A lot has changed since they were little and Nicky’s not so sure he’s ready to see her again. But when they head for a trek across the moors to take their minds off everything, a series of unforeseen circumstances could leave the brothers in a vulnerable and very dangerous position.”

The Skylarks’ War, by Hilary McKay

No Fixed Address, by Susin Nielsen

“Felix Knutsson is nearly thirteen, lives with his mother and pet gerbil Horatio, and is brilliant at memorising facts and trivia. So far, pretty normal. But Felix and his mom Astrid have a secret: they are living in a van. Astrid promises it’s only for a while until she finds a new job, and begs Felix not to breathe a word about it.

“So when Felix starts at a new school, he does his very best to hide the fact that most of his clothes are in storage, he only showers weekly at the community centre, and that he doesn’t have enough to eat. When his friends Dylan and Winnie ask to visit, Felix always has an excuse. But Felix has a plan to turn his and Astrid’s lives around: he’s going to go on his favourite game show Who, What, Where, When and win the cash prize. All he needs is a little luck and a lot of brain power.”

“When Ethan’s class is given the task of creating a graphic novel and magical ink jumps out of his father’s sketchbook, a strange series of events is set into motion. To his younger sister, Inkling is Lucy, her beloved dog; to his father, Inkling is a second chance at a dwindling career and a chance to solve his family’s money worries. Friends and enemies alike try to use Inkling to ace tests and create bestselling comic books, but to Ethan, Inkling is his friend - and he must do everything in his power save him.”

Patron Saints of Nothing, by Randy Ribay

“When Jay Reguero hears of his cousin Jun’s death, everything changes. Although years have passed since they were last in contact, the stories about Jun just don’t fit with the boy Jay knew. Hoping to uncover the truth, Jay travels to Jun’s home in the Philippines - but the shocking realities of life there lead to even more questions. Can Jay find the answers he seeks?”

“Lampie the lighthouse-keeper’s daughter must climb sixty-one steps to light the lantern every evening and warn ships away from the rocks. One night, in the midst of a terrible storm, she discovers that her matches have run out. Disaster strikes, and an adventure begins.

“Lampie is sent to work as a maid at the Admiral’s Black House, where rumour has it that a monster lurks. What she discovers there throws her into a world of pirates and mermaids and puts her in terrible danger. Can she find a way to save the ones she loves?”

Voyages in the Underworld of Orpheus Black, by Marcus & Julian Sedgwick & Alexis Deacon

“Harry Black wakes in hospital to learn that his brother Ellis has almost certainly been killed by a V2 rocket falling during a German air raid on London. In a state of wounded delirium, Harry’s mind begins to blur the distinctions between the reality of the war-torn city, the fiction of his unpublished sci-fi novel and the myth of Orpheus and Eurydice. Driven by visions of Ellis still alive and a sense of poetic inevitability, Harry discharges himself from hospital and begins a search for his brother that will lead him deep into the city’s Underworld.”

The Boxer, by Nikesh Shukla

“Told over the course of the ten rounds of his first fight, this is the story of amateur boxer Sunny. A 17 year old feeling isolated and disconnected in the city he’s just moved to, Sunny joins a boxing club to learn to protect himself after a racist attack. He finds the community he’s been desperately seeking at the club, and a mentor in trainer Shobu, who helps him find his place in the world.

“But racial tensions are rising in the city, and when a Far Right march through Bristol turns violent, Sunny is faced with losing his new best friend Keir to radicalisation.”

On the Come Up, by Angie Thomas

“Bri wants to be one of the greatest rappers of all time. As the daughter of an underground hip hop legend who died right before he hit big, Bri’s got massive shoes to fill. But when her first song goes viral for all the wrong reasons, Bri finds herself at the centre of controversy and portrayed by the media as more menace than MC. And with an eviction notice staring her family down, Bri no longer just wants to make it - she has to. Even if it means becoming the very thing the public has made her out to be.”

“Storm, shipwreck, survival. This novel delves deep into the might and majesty of the unpredictable ocean, the strength of an unlikely friendship between a British boy and a Berber girl and their will to survive against all the odds.”

“Ro Snow is the girl no-one notices - she doesn’t go to parties and she doesn’t have friends over. Besides, even if anyone tried to call on her they’d discover that no. 56 isn’t her house at all - it’s her decoy house, where she tells people to pick her up and drop her off so she can hide who she really is and where she really lives. And she certainly doesn’t have a best friend because having friends means opening up, telling the truth and there is one secret she can never risk revealing again.

“But when Tanvi turns up, Ro starts to put other things before her secret first - like her love of singing, her crush on good looking and popular Luke, her budding friendship with the adorable Tanvi - and it’s only a matter of time before everything comes out and everything changes!”