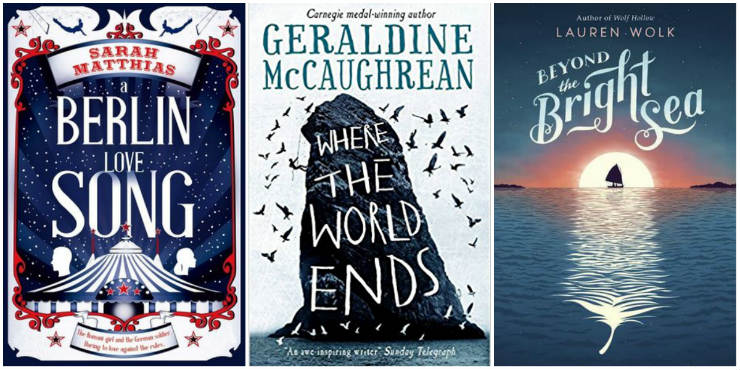 “Anapra is one of the poorest neighbourhoods in the Mexican city of Juarez - 20 metres outside town lies a fence, and beyond it, America - the dangerous goal of many a migrant.

“Faustino is one such trying to escape from the gang he’s been working for. He’s dipped into a pile of dollars he was supposed to be hiding and now he’s on the run. He and his friend, Arturo, have only 36 hours to replace the missing money, or they’re as good as dead.

“Watching over them is Saint Death. Saint Death (or Santissima Muerte) - she of pure bone and charcoal-black eye, she of absolute loyalty and neutral morality, holy patron to rich and poor, to prostitute and narco-lord, criminal and police-chief. A folk saint, a rebel angel, a sinister guardian.”

Beyond the Bright Sea, by Lauren Wolk

“Crow has lived her whole life on a tiny, starkly beautiful island. Her only companions are Osh, the man who rescued her from a washed-up skiff as a baby and raised her, and Miss Maggie, their neighbour across the sandbar.

“But it is only when a mysterious fire appears across the water that an unspoken question of her own history forms in Crow’s heart, and an unstoppable chain of events is triggered. Crow sets out to find her lost identity - and, ultimately, to learn what it means to be a family.”

“When Nicky and Kenny finds Jez Bowen and his gang digging up a badger set, there’s not a lot he can do to save them. But one badger cub has escaped - can the brothers save it?”

Where the World Ends, by Geraldine McCaughreen

“In the summer of 1723, 8 boys and 3 men were marooned on a rocky stack in the middle of the sea at the edge of the Outer Hebrides. This book tells the story of how they survived nine months of deadly storms, madness and starvation with only a few ropes and baskets, and their own fortitude and endurance to save them.”

“You’re called Fidge and you’re nearly 11. You’ve been hurled into a strange world. You have three companions: two are unbelievably weird and the third is your awful cousin Graham. You have to solve a series of nearly impossible clues. You need to deal with a cruel dictator and three thousand Wimbley Woos (yes, you read that sentence correctly). And the whole situation - the whole, entire thing - is your fault.”

The Hate U Give is also available as an eBook on OverDrive.

Read Emily’s review of The Hate U Give →

“Today will change Adam Thorn’s life. Between his religious family, unpleasant boss and his ex-boyfriend, the bindings of his world are coming undone. And way across town, a ghost has risen from the lake. Is there time for Adam to find his release?”

Release is also available as an eBook on OverDrive and an eAudiobook on BorrowBox.

The rest of the longlist

“Bert and Betty Brown have got themselves a little angel. Bert found him in his top pocket when he was driving his bus. Bert and Betty’s friends think he’s lovely. So do Nancy and Jack and Alice from Class 5K. What a wonder!

“But Acting Head Teacher Mrs Mole is not so sure. Nor is Professor Smellie. Or the mysterious bloke in black who claims to be a School Inspector. Then there’s Basher Malone - big, lumbering Basher Malone. He really doesn’t like Angelino. And it looks like he’s out to get him.”

The Tale of Angelino Brown is also available as an eAudiobook on BorrowBox.

The Hypnotist, by Laurence Anholt

“Jack has left his native Ireland and is making a new life as Professor of Neurology at a university in the American South. He has skills in hypnotism and mind control, honed over his lifetime, that he mostly keeps hidden.

“Thirteen-year-old Pip is plucked out of an orphanage by a farmer, hired as a farm-hand, and as carer for the farmer’s wife. But Pip is black. The farmer and his wife are white. And this is 1960s America, where race defines you and overshadows everything. As racial tensions reach boiling point, Jack and Pip’s lives become inextricably linked.”

Overheard in a Tower Block, by Joseph Coelho & Kate Milner

“Gazing at the stars from five storeys up, smelling the bins from five storeys below. Overheard arguments, overheard laughter. A disappearing father and a Mermaid-Queen mother; statues that sing for flesh and blood; bullies who kick you under the table; perfect red trainers - and the things that lurk in the library. Award-winning poet Joseph Coelho’s new collection is a powerful and moving poetic narrative about growing up in the city.”

Wed Wabbit is also available as an eBook on OverDrive and eAudiobook on BorrowBox.

The Island at the End of Everything is also available as an eBook on OverDrive.

The Song from Somewhere Else, by A. F. Harrold & Levi Pinfold

“Frank doesn’t know how to feel when Nick Underbridge rescues her from bullies one afternoon. No one likes Nick. He’s big, he’s weird and he smells - or so everyone in Frank’s class thinks.

“And yet, there’s something nice about Nick’s house. There’s strange music playing there, and it feels light and good and makes Frank feel happy for the first time in forever. But there’s more to Nick, and to his house, than meets the eye, and soon Frank realises she isn’t the only one keeping secrets. Or the only one who needs help.”

“But when his clever older brother, Musa, gets mixed up with some young political activists, everything changes. Before long, bombs are falling, people are dying, and Omar and his family have no choice but to flee their home with only what they can carry. Yet no matter how far they run, the shadow of war follows them - until they have no other choice than to attempt the dangerous journey to escape their homeland altogether. But where do you go when you can’t go home?”

Out of Heart, by Irfan Master

“Adam is a teenage boy who lives with his mum and younger sister. His dad has left them although lives close by. His sister no longer speaks. His mum works two jobs. Adam feels the weight of the world upon his shoulders. Then his grandfather dies and in doing so he donates a very precious gift - his heart.

“William is the recipient of Adam’s grandfather’s heart. He has no family and feels rootless and alone. In fact, he feels no particular reason to live. And then he meets Adam’s family. William has received much, but it appears that he has much to offer Adam and his family too.”

“Max is 17, a German schoolboy, when he meets Lili, a trapeze artist from a travelling circus that performs every year in Berlin. Lili is from a Romani gypsy family whose life and customs are very different from those of Max and his family.

“Their friendship turns into love - but love between a member of the Hitler youth and a gypsy is forbidden. As events tear them apart can their love survive?”

The Call, by Peadar Ó Guilin

“Every teenager in Ireland is training to survive ‘the call’ - the three minutes and four seconds when each of them is transported to the desolate Grey Land of the long banished fae folk, the Sidhe. Nine out of ten do not return.”

“Zen and Nova have ridden a train from one world to another before. But this time it’s different. They’ve passed through a gate which shouldn’t exist at all. They did terrible things to open it, and now they can never go back.”

The Explorer is also available as an eBook on OverDrive.

“Zimbabwe, 1994. A group of children spot peculiar lights in the sky over the grounds of their school. From this moment on, six young people’s lives are changed forever.

“Gary hides the anguish he feels now his mum’s left, acting out in fury and hatred. Chloe has no words for the thing she fears most every day. Karl is the headmaster’s son, now fallen from grace. Tendai knows he can never live up to his grieving father’s ideals. And Sixpence watches all, knowing he’ll never be like these other children. All of them have seen something they can’t explain.

“In amongst these tangled, tortured lives, comes a group of psychologists to verify the spookily similar claims of every witness. Their daughter, Holly, can tell there’s more to it than aliens or mass hysteria - can she reveal the dark truths that haunt them?”