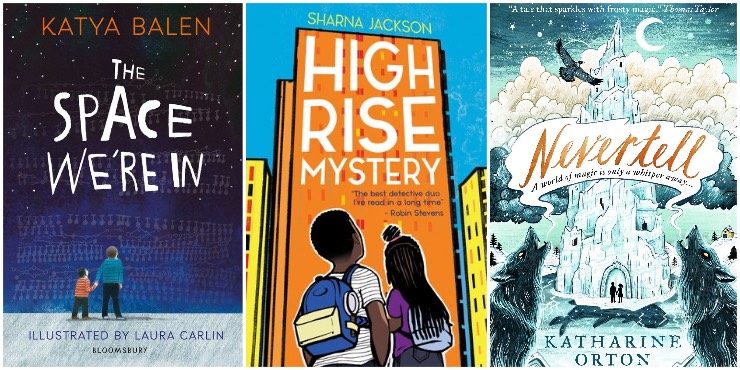 The Branford Boase prize recognises the authors and editors of the year’s best debut novels for children. Previous winners and nominees have gone on to do great things, so why not try a new author today?

The Middler, by Kirsty Applebaum

“Eleven-year-old Maggie lives in Fennis Wick, enclosed and protected from the outside world by a boundary, beyond which the Quiet War rages and the dirty, dangerous wanderers roam. Her brother Jed is an eldest, revered and special. A hero. Her younger brother is Trig - everyone loves Trig. But Maggie’s just a middler; invisible and left behind. Then, one hot September day, she meets Una, a hungry wanderer girl in need of help, and everything Maggie has ever known gets turned on its head.

“Narrated expertly and often hilariously by Maggie, we experience the trials and frustrations of being the forgotten middle child, the child with no voice, even in her own family.”

Little Badman and the Invasion of the Killer Aunties, by Humza Arshad & Henry White

“Humza Khan is the greatest 11-year-old rapper Eggington has ever known: he is Little Badman and he is destined to be rich and famous.

“But when Humza’s music teacher is taken ill his dreams are put on hold. His Auntie has stepped in as substitute, and nobody seems to care about the unorthodox teaching because of the endless sweet treats. As other teachers start to disappear, with more Aunties appearing in their place, Humza knows something isn’t right.

“With the help of his elderly Uncle and friends Umer and Wendy, Humza discovers that the suspicious Aunties might not be as friendly as they seem. Now he must find a way to destroy them before they take over the world.”

The Space We’re In, by Katya Balen

“Frank is ten. He likes cottage pie and football and cracking codes. Max is five. He only eats Quavers and some colours are too bright for him and if he has to wear a new t-shirt he melts down down down. Sometimes Frank wishes Mum could still do huge paintings of stars and asteroids like she used to, but since Max was born she just doesn’t have time.

“When tragedy hits Frank and Max’s lives like a comet, what will it take for Frank to piece together a universe in which he and Max aren’t light years apart?”

“In an unforgettable adventure set in contemporary India, Asha is guided by a majestic bird which she believes to be the spirit of her grandmother. Together with her best friend, Jeevan, she embarks on a journey across the Himalayas to find her missing father and save her home.”

A Pocketful of Stars, by Aisha Bushby

“Can piecing together the past help you change the present?

“Safiya and her mum have never seen eye to eye. Her mum doesn’t understand Safiya’s love of gaming and Safiya doesn’t think they have anything in common. As Safiya struggles to fit in at school she wonders if her mum wishes she was more like her confident best friend Elle.

“But then her mum falls into a coma and, when Safiya waits by her bedside, she finds herself in a strange alternative world that looks a bit like one of her games. And there’s a rebellious teenage girl, with a secret, who looks suspiciously familiar.”

Charlie Changes into a Chicken, by Sam Copeland & Sarah Horne

“Charlie McGuffin tries to be an optimist, but in reality he’s a bit of a worrier. Some of the things Charlie is worried about: his brother (who is in hospital); their very panicked parents; unwanted attention from the school bully; the fact that he’s started turning into animals!

“Even though every kid wants a superhero power, Charlie isn’t keen on turning into a pigeon in the middle of the school play. But what happens if he does?”

A nomination for our very own Stock Librarian!

“Lil Potkin lives in bleak Peligan City. Her mum works in City Hall and is rarely at home, so aspiring journalist Lil has all the time she needs to explore the city in her bright yellow raincoat, investigating unsolved stories.

“One rainy evening Lil meets a sad-looking boy sitting by himself in the bus station and buys him a hot chocolate. That night Lil wakes to find him in her bedroom. He doesn’t want to admit to being a ghost, but when he finally remembers his name (Nedly - possibly) he explains that he needs Lil’s help to find out what happened to him after he disappeared from his orphanage a year ago.

“So Lil and Nedly - aka Potkin and Stubbs - team up to solve their mystery, and they call in the reluctant help of once-famous detective Abe Mandrel.”

The Garden of Lost Secrets, by A. M. Howell

“October, 1916. Clara is sent to stay with her formidable aunt and uncle in the grounds of a country estate. She soon discovers that her new surroundings hold secrets: a locked room and a hidden key, and a mysterious boy who only appears in the gardens at night. But can Clara face up to her own secrets, and a war she’s desperate to forget?”

“Life in Bearmouth will never change - at least, that’s what people say. They work hard to bring wealth to the Master, toiling in dark mines and brutal conditions for six long days each week.

“When young friends Newt and Devlin start to question the system, they set in motion a chain of events that could destroy their entire world. But freedom is worth fighting for.”

The Girl Who Lost Her Shadow, by Emily Ilett

“Shadows were meant to stay stuck, like ears and promises.

“On the morning of Gail’s birthday, she watches her shadow slip under the kitchen door. She’s not surprised it decided to leave. Her dad has gone for good. Her big sister Kay, once Gail’s best friend, has disappeared into sadness – and now her shadow has left too.

“Determined to make things right, Gail chases after the shadows. But her adventures take her to unexpected places and she soon discovers that where there are shadows, there’s darkness, and that she’s not the only one looking for something missing…

“In a world of light and shadow, despair and hope sit side by side. Can Gail recover what the sisters have lost?”

A Good Girl’s Guide to Murder, by Holly Jackson

“Five years ago, schoolgirl Andie Bell was murdered by Sal Singh. The police know he did it. Everyone in town knows he did it. But having grown up in the same small town that was consumed by the crime, Pippa Fitz-Amobi isn’t so sure.

“When she chooses the case as the topic for her final project, she starts to uncover secrets that someone in town desperately wants to stay hidden. And if the real killer is still out there, how far will they go to keep Pip from the truth?”

“Summer in London is hot, the hottest on record, and there’s been a murder in THE TRI: the high-rise home to resident know-it-alls, Nik and Norva. Who better to solve the case? Armed with curiosity, home-turf knowledge and unlimited time - until the end of the summer holidays anyway.”

“Way out in the furthest part of the known world, a tiny stronghold exists all on its own, cut off from the rest of human-kin by monsters that lurk beneath the Snow Sea. There, a little boy called Ash waits for the return of his parents, singing a forbidden lullaby to remind him of them - and doing his best to avoid his very, very grumpy yeti guardian, Tobu.

“But life is about to get a whole lot more crazy-adventurous for Ash. When a brave rescue attempt reveals he has amazing magical powers, he’s whisked aboard the Frostheart, a sleigh packed full of daring explorers who could use his help. But can they help him find his family?”

Lori and Max, by Catherine O’Flynn

“Max is the new girl at school and Lori is asked to look after her. Max is odd. She doesn’t fit in - but then Lori doesn’t really fit in either. When some charity money goes missing and Max disappears, Lori seems to be the only one who doesn’t think Max has stolen it and run away.”

“11-year-old Lina has never seen the world beyond the prison camp until the night she escapes with her best friend, Bogdan. As the pair journey across a snowy Russian wilderness, they are pursued by a vengeful sorceress and her pack of shadow wolves. The children will need every ounce of bravery - and a little sorcery of their own - if they are to survive.”

“Emily longs to be ordinary, but when her parents disappear, she stumbles into the secret, spooky world of the Midnight Hour. There’s only one way she can rescue her parents: she must find the courage to embrace her magic.”

“St Petersburg, Russia 1725. Katinka Dashkova is running for her life because everything she knows is changing. Katinka, a dazzling ballerina with a hunched back, and her friends Alexei the Giant and Nikolai the dwarf are different. That’s why they are part of Peter the Great’s Circus of Curiosities. But the Tzar is dead and they must flee the Winter Palace. Guided by a special map, they set out across Russia running for their lives.”

“Sorrel Fallowfield is so good at being good that teachers come to her when they need help remembering the school rules – and there are LOTS.

“Luckily, Sorrel doesn’t have any trouble following them, until the day she discovers a faded packet of Surprising Seeds buried under a tree in her backyard.

“Now she’s hearing voices, seeing things, experiencing an almost unstoppable urge to plant the Seeds in some very unusual places… and completely failing to win her school’s competition to find The Most Obedient Child of the School.

“How can I hold myself together, when everything around me is falling apart?

“Neena’s always been a good girl - great grades, parent-approved friends and absolutely no boyfriends. But ever since her brother Akash left her, she’s been slowly falling apart - and uncovering a new version of herself who is freer, but altogether more dangerous.

“As her wild behaviour spirals more and more out of control, Neena’s grip on her sanity begins to weaken too. And when her parents announce not one but two life-changing bombshells, she finally reaches breaking point. But as Neena is about to discover, when your life falls apart, only love can piece you back together.”

“Willow Moss, the youngest and least powerful sister in a family of witches, has a magical ability for finding lost things - like keys, or socks, or wooden teeth. Her magic might be useful, but it’s not exactly exciting.

“Until, that is, the most powerful witch in the whole of Starfell turns up at her door needing Willow’s help. A whole day - last Tuesday to be precise - has gone missing. And the repercussions could be devastating. Can Willow find the day to save the day?”