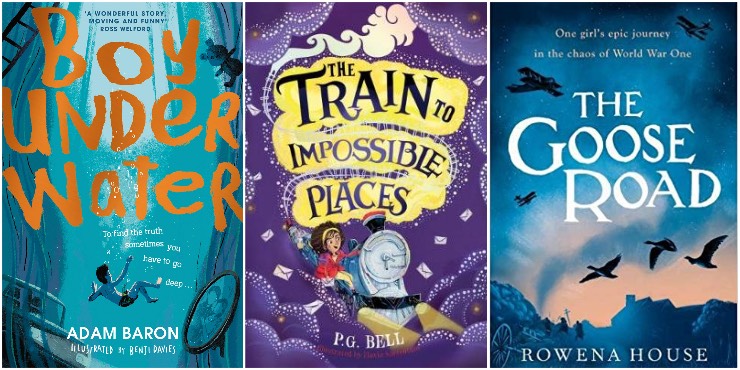 The Branford Boase prize recognises the authors and editors of the year’s best debut novels for children. Previous winners and nominees have gone on to do great things, so why not try a new author today?

Read Eleanor’s review of The House with Chicken Legs →

“A funny and touching story about nine-year-old Cymbeline Igloo who turns detective to discover the family secret that has led to his mother’s breakdown.”

“Suzy is surprised to find a grumpy troll building a railway through her house - especially when a gigantic steam train crashes into her hallway! This is the Impossible Postal Express, the trusty delivery service of the Union of Impossible Places, and Suzy becomes its newest recruit. And with her cursed first package, an Impossible adventure begins.”

“Rosie loves Jack. Jack loves Rosie. So when they’re split up, Rosie will do anything to find the boy who makes the sun shine in her head. Even run away from home. Even cross London and travel to Brighton alone, though the trains are cancelled and the snow is falling. Even though any girl might find that hard, let alone a girl with Down’s syndrome.”

The Fandom, by Anna Day

“Violet’s in her element - cosplay at the ready, she can’t wait to feel part of her favourite fandom: The Gallow’s Dance, a mega-story and movie franchise. But at Comic Con, a freak accident transports Violet and her friends into the The Gallows Dance for real - and in the first five minutes, they’ve caused the death of the heroine.

“It’s up to Violet to take her place, and play out the plot the way it was written. But stories have a life of their own.”

Me Mam. Me Dad. Me., by Malcolm Duffy

“Danny’s mam has a new boyfriend. Initially, all is good - Callum seems nice enough, and Danny can’t deny he’s got a cool set up; big house, fast car, massive TV, and Mam seems to really like him. But cracks begin to show, and they’re not the sort that can be easily repaired. As Danny witnesses Mam suffer and Callum spiral out of control he goes in search of his dad. The Dad he’s never met.

“Set in Newcastle and Edinburgh, this supremely readable coming-of-age drama tackles domestic violence head on, but finds humour and hope in the most unlikely of places.”

“A brave, bright girl embarks on a heart-racing adventure to find her missing father - with magic and danger quite literally in the air.”

“Austria, 1945. After losing his family, Jakob shelters with Herr Engel in a rural stables, where they hide the precious Lipizzanner stallions they know Hitler wants to steal. When a German officer comes looking for Jakob and finds the horses, Jakob and his guardian know they must get the stallions to safety, but the only way is straight through Nazi territory.”

Brightstorm: high adventure in the frozen south, by Vashti Hardy

The Goose Road, by Rowena House

“France 1916. Angélique Lacroix is haymaking when the postman delivers the news: her father is dead, killed on a distant battlefield. She makes herself a promise: the farm will remain exactly the same until her beloved older brother comes home from the Front.”

Tilly and the Bookwanderers, by Anna James & Paola Escobar

“Eleven-year-old Tilly has lived above her grandparents’ bookshop ever since her mother disappeared shortly after she was born. Like the rest of her family, Tilly loves nothing more than to escape into the pages of her favourite stories.

“One day Tilly realises that classic children’s characters are appearing in the shop through the magic of ‘book wandering’ - crossing over from the page into real life. With the help of Anne of Green Gables and Alice in Wonderland, Tilly is determined to solve the mystery of what happened to her mother all those years ago.”

The Mystery of the Colour Thief, by Ewa Jozefkowicz

“First the accident, then the nightmares and the thief who steals the colour from Izzy’s world. Will her neighbour and a nest of cygnets help solve the mystery of the colour thief?”

I Am Thunder, by Muhammad Khan

“15-year-old Muzna Saleem is passionate about writing and dreams of becoming a novelist. There’s just one problem - her super-controlling parents have already planned her life out for her: Step 1: Get educated. Step 2: Qualify as a doctor. Step 3: Marry a cousin from Pakistan. Oh, and boyfriends are totally haram.

“No one is more surprised than humble Muzna when high school hottie, Arif Malik, takes an interest in her. But Arif and his brother are angry at the West for demonising Islam and hiding a terrible secret. As Arif begins to lead Muzna down a dark path, she faces a terrible choice: keep quiet and betray her beliefs, or speak up and betray her heart?”

Read Emily’s review of I Am Thunder →

“Sarah has played many roles. Dutiful daughter. Talented gymnast. Persecuted Jew. Lost orphan. But now she faces her most challenging role of all. Now she must become the very thing she hates. For the only way she can survive as a spy at a boarding school for the cream of Nazi society is to become a monster like them. A monster who can destroy them.”

Read Emily’s review of I Am Thunder →

On a Scale of One to Ten, by Ceylan Scott

“Tamar is admitted to Lime Grove, a psychiatric ward for teenagers, where the psychologists ask her endless questions. How did the self-harming start? Will you tell us what happened? How do you feel, on a scale of one to ten? But there’s one question Tamar can’t - won’t - answer: What happened to her friend Iris?”

“No one can get into Scotland, just like no one can cross the channel. England is under control of an authoritarian regime. They can track anyone, anywhere from a chip implanted in their skin.

“But Jake, who breaks out of the Academy dorm he’s been housed in, has decided to escape. To go off-grid. To join a small group of independent spirits determined to keep out of the government’s prying eyes. The Outwalkers. It’s only together he’ll be able to reach Scotland - and safety.”

Sunflowers in February, by Phyllida Shrimpton

“Lily wakes up one crisp Sunday morning on the side of the road. She has no idea how she got there. It is all very peaceful, and very beautiful. It is only when the police car, and then the ambulance arrive, and she sees her own body, that she realises that she is in fact dead.

“But what is she supposed do now? Lily has no option but to follow her body and see her family - her parents and her twin brother - start falling apart. And then her twin brother Ben gives her a once in a deathtime opportunity - to use his own body for a while. But will Lily give Ben his body back? She is beginning to have a rather good time.”

“Taran and her twin Hari never wanted to move to Firestone House. But when the rent was doubled overnight and Dad’s chemo meant he couldn’t work, they had to make this tower block their home. It’s good now though; they feel part of something here.

“When they start noticing boarded-up flats and glossy fliers for expensive apartments, they don’t think much of it - until Hari is caught up in a tragedy, and they are forced to go on the run. It’s up to the teenagers to uncover the sinister truth behind what’s going on in the block, before it blows their world apart.”

The Fox Girl and the White Gazelle, by Victoria Williamson

“Reema runs to remember the life she left behind in Syria. Caylin runs to find what she’s lost. Under the grey Glasgow skies, 12-year-old refugee Reema is struggling to find her place in a new country, with a new language and without her brother. But she isn’t the only one feeling lost. Her Glaswegian neighbour Caylin is lonely and lashing out.

“When they discover an injured fox and her cubs hiding on their estate, the girls form a wary friendship. And they are more alike than they could have imagined: they both love to run. As Reema and Caylin learn to believe again, in themselves and in others, they find friendship, freedom and the discovery that home isn’t a place, it’s the people you love.”