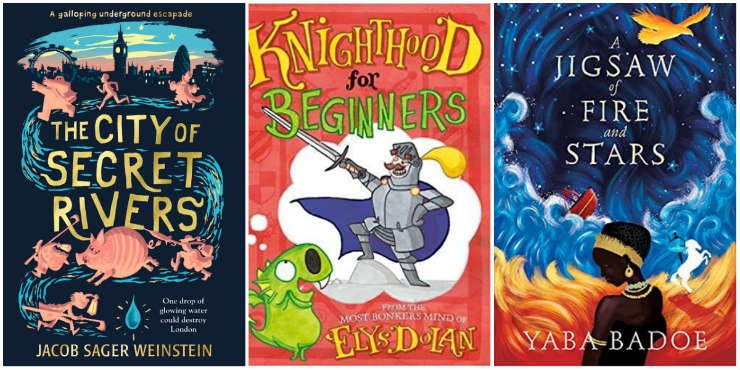 The Branford Boase prize recognises the authors and editors of the year’s best debut novels for children. Previous winners and nominees including Siobhan Dowd, Meg Rosoff and Frank Cottrell Boyce have gone on to do great things, so why not try a new author today?

Knighthood for Beginners, by Elys Dolan

“With the help of his trusty steed - an eccentric goat called Albrecht - Dave hopes to convince the court that being rather small, distinctly green, and, frankly, a dragon is no barrier to knighthood.

“Gasp as he jousts with Sir Gnasty! Duck as he tries to pacify brawling peasants! And cheer as he finally wins his Special Knight’s Hat!”

The Starman and Me, by Sharon Cohen

“He wasn’t an alien, I was sure of that. It was more like he’d walked in through an ancient door from the past - except he was here, in my bedroom and his misty forest was somewhere real on Planet Earth.

“12-year-old Kofi first spots the prehistoric human on a supermarket roundabout. He is small and dark and curled into a tight ball. His name is Rorty Thrutch and he has zero memory of how he ended up in the unexceptional village of Bradborough, or why he’s being hunted. Kofi soon finds out that Rorty can do amazing things. He can copy, paste and delete objects, using only the power of his mind. This is the discovery of the century and mad, greedy scientists will stop at nothing to track him down.”

“Billy is a lonely boy. He’s obsessed with swimming in the sea, which is where he goes to wash his problems far, far away. Thanks to his mum’s mystery illness, his dad has been forced to work extra hours to make ends meet, so Billy locks himself away with David Attenborough films, and ponders the magic of nature.

“Meanwhile at school, bullies mercilessly seize on Billy’s ‘otherness’ and make his life as miserable as possible - but then new boy Patrick Green, with ‘fingers like steel, strength of a bear’, joins Billy’s class. And when a mackerel swims up to Billy’s face, blows bubbles into his Vista Clear Mask goggles and says ‘Fish Boy’ - Billy’s whole world changes.”

The City of Secret Rivers, by Jacob Sager Weinstein

“Hyacinth Hayward has recently arrived from America and is having difficulty adjusting to her new surroundings, especially being in the sole company of her eccentric mother. Everything feels strange. Very strange. And it gets stranger the day she accidentally unleashes the power of a secret river running through London.

“To prevent a second Great Fire, Hyacinth needs to retrieve a single, magically charged drop of water from somewhere in the city sewer system. Along the way she encounters an eclectic cast of characters - the shambling, monstrous Saltpetre Men who kidnap her mother, the Toshers who battle for control of magical artefacts and a giant pig with whom she has a tea party. The clock is ticking - will she figure out who to trust?”

“udi’s going to play for the greatest team on earth, instead of sweating over each stitch he sews, each football boot he makes. But one unlucky kick brings Budi’s world crashing down. Now he owes the Dragon, the most dangerous man in Jakarta. Soon it isn’t only Budi’s dreams at stake, but his life.”

“Ryo witnesses a lone warrior scare bandits away from the village in which he has grown up, and sets his heart on training to become like the hero he saw. He sets out on a journey to find his way in the world, and his encounters with the people he meets leads him to a true understanding of what it means to follow his dream.”

A Jigsaw of Fire and Stars, by Yaba Badoe

“A powerful, haunting, contemporary debut that steps seamlessly from the horrors of people-trafficking to the magic of African folklore, by an award-winning Ghanaian-British filmmaker.

“Sante was a baby when she was washed ashore in a sea-chest laden with treasure. It seems she is the sole survivor of the tragic sinking of a ship carrying migrants and refugees. Her people. Fourteen years on she’s a member of Mama Rose’s unique and dazzling circus. But, from their watery grave, the unquiet dead are calling Sante to avenge them.”