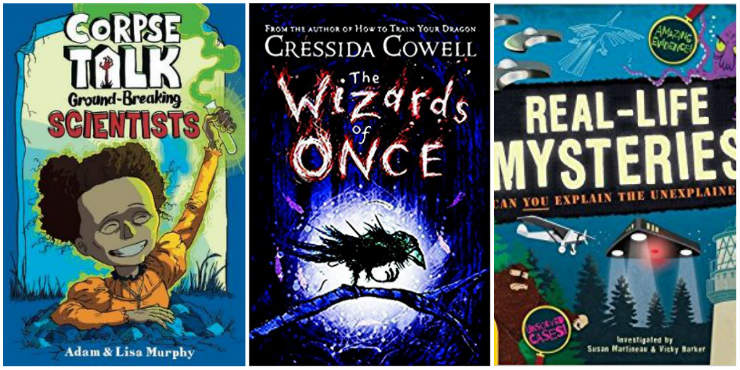 The shortlist for the 2018 Blue Peter Book Awards has been announced. The two category winners - voted for by hundreds of children in participating UK schools - will be revealed in February 2018.

“You’re called Fidge and you’re nearly 11. You’ve been hurled into a strange world. You have three companions: two are unbelievably weird and the third is your awful cousin Graham. You have to solve a series of nearly impossible clues. You need to deal with a cruel dictator and three thousand Wimbley Woos (yes, you read that sentence correctly). And the whole situation - the whole, entire thing - is your fault.

Wed Wabbit has also been nominated for a Costs Children’s Book Award and is available as an eBook on OverDrive and eAudiobook on BorrowBox.

The Wizards of Once, by Cressida Cowell

“The story of a young boy Wizard and a young girl Warrior who have been taught since birth to hate each other like poison; and the thrilling tale of what happens when their two worlds collide. Perfect for boys and girls who love fantasy adventure.”

“Once there was Magic, and the Magic lived in the dark forests. Until the Warriors came …

“In this whirlwind adventure, Xar and Wish must forget their differences if they’re going to make it to the dungeons at Warrior Fort. Where something that has been sleeping for hundreds of years is stirring…”

The Wizards of Once is also available as an eAudiobook on BorrowBox.

The Island at the End of Everything has also been nominated for a Costa Children’s Book Award and is available as an eBook on OverDrive.

Beyond the Sky: You and the Universe, by Dara Ó’Briain, illustrated by Dan Bramal

“People have been dreaming about space travel for centuries - there’s something amazing about the idea of leaving our planet behind and setting out to explore the Universe - there’s so much we still don’t know.

“UK and Ireland’s best-loved comedian Dara O. Briain takes you on a journey from the safety of your comfiest chair to the furthest reaches of space (and beyond!).”

“Adam Murphy interviews the dead famous scientists who changed the world - getting their stories straight from the corpses’ mouths!

“Reading this series is like having history injected into your brain! It guarantees laughs, surprises, and a whole host of the most astonishing achievements you’ll ever discover.”

Real-Life Mysteries: Can you explain the unexplained?, by Susan Martineau

“Have you ever wondered what exactly does go bump in the night? From mysteries like Shackleton’s ghostly companion to the Loch Ness Monster and friends, read the amazing evidence about these mysterious cases and make up your own mind. Quench your curiosity with this myth-busting (and sometimes, myth-confirming!), fascinating kids’ case study book. Things are not always what they seem - until they are, then you might wish you had never asked!”