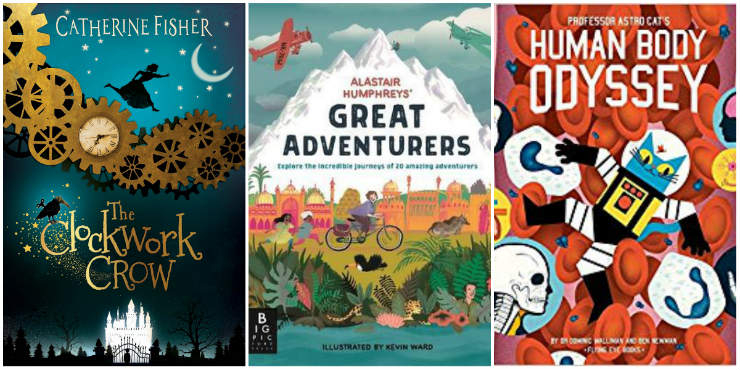 The longlist for the 2019 Blue Peter Book Awards has been announced. The two category winners - voted for by hundreds of children in participating UK schools - will be revealed in February 2019.

“Dylan has wanted a superpower for as long as he can remember, especially since his brother and sister have got really cool ones. But when his wish finally comes true, Dylan is mightily disappointed. For Dylan has become Iguana Boy. He can talk to iguanas - rubbish.

“And when supervillain Celina Shufflebottom kidnaps all the superheroes in London, Dylan must work out how to use his new team of chatty iguanas to save the day. He’s going to have to think outside the box, (the pizza box), if he’s going to become the hero he’s always dreamed of. If he’s going to make Iguana Boy cool.”

Into the Jungle: stories for Mowgli, by Katherine Rundell & Kristjana S. Williams

Origin stories for some of the best-loved characters in The Jungle Book, from the author of The Explorer.

“Welcome to the sleepy island of Penfurzy, where nothing exciting ever really happens. Or does it?

“Adventure awaits Demelza and her new best friend in the whole world, Nessa, as they explore the island and uncover the mysteries of the Penfurzy Knights. With a honking pet goose sidekick, quirky islanders and a legendary treasure to find, it’s up to Nessa and Demelza to ride their bikes, solve the puzzles before them, and face down danger with frisbees, water-balloons, feathers … and a toilet plunger.

“Their friendship will warm your heart. Their bravery will make them legends.”

Song of the Dolphin Boy, by Elizabeth Laird & Peter Bailey

“Finn has always been different, and in the tiny fishing village of Stromhead he sticks out like a sore thumb. Always told to keep away from the water, he’s felt that something was missing until one day he dives in and finds that, swimming with the dolphins, he feels completely at home.

“But his new friends are in danger of being injured by the rubbish that floats out into the water - and now a supermarket is going to release thousands of balloons that could drift out to sea and cause even more damage.

“Desperate to help the dolphins, Finn goes to the Lighthouse Crew, a group of kids who have always left Finn out. Will they be able to set aside their differences to save the dolphins? And what will Finn discover about his past along the way?”

“In the snowy kingdom of Erkenwald, whales glide between icebergs, wolves hunt on the tundra and polar bears roam the glaciers. But the people of this land aren’t so easy to find. Because Erkenwald is ruled by the cruel Ice Queen and the tribes must stay hidden; if they are caught in the open they risk capture and imprisonment by the evil sorceress.

“Join Eska, a girl who breaks free from a cursed music box, and Flint, a boy whose inventions could change the fate of Erkenwald forever, as they journey to the Never Cliffs and beyond in search of an ancient, almost forgotten, song with the power to force the Ice Queen back.”

The Boy Who Grew Dragons, by Andy Shepherd & Sara Ogilvie

“When Tomas discovers a strange old tree at the bottom of his grandad’s garden, he doesn’t think much of it. But he takes the funny fruit from the tree back into the house - and gets the shock and delight of his life when a tiny dragon hatches! The tree is a dragonfruit tree, and Tomas has got his very own dragon, Flicker.

“Tomas soon finds out that life with Flicker is great fun, but also very unpredictable. Yes, dragons are wonderful, but they also set fire to your toothbrush and leave your pants hanging from the TV aerial. Tomas has to learn how to look after Flicker - and quickly.

“And then something extraordinary happens - more dragonfruits appear on the tree. Tomas is officially growing dragons.”

The Clockwork Crow, by Catherine Fisher

“The Clockwork Crow is a mysterious gothic Christmas tale set in a frost-bound Victorian country mansion. When orphaned Seren Rees is given a mysterious package by a strange and frightened man on her way to her new home, she reluctantly takes it with her. But what is in the parcel? Who are the Family who must not be spoken of, and can the Crow help Seren find Tom, before the owner of the parcel finds her?”

Absolutely Everything! A history of earth, dinosaurs, rulers, robots and other things too numerous to mention, by Christopher Lloyd & Andy Forshaw

“Embark on an entertaining journey across millennia and continents, and learn about absolutely everything including the creation of planet Earth, the age of dinosaurs, the rise of humans, the miserable medieval times, globalisation, wars, revolutions, technology - and much more.”

“Hand-selected by Alastair Humpreys, read about the incredible journeys undertaken by twenty of the most heroic and impressive explorers who ever lived, including Ibn Battuta (14th-century explorer); Apsley Cherry-Garrard (a member of Scott’s Antarctic expedition); Michael Collins (Apollo Moon mission astronaut) and Nellie Bly (who travelled round the world in less than 80 days).

“A wide-spread selection of explorers from young to old, male to female and with a range of abilities, these explorers crossed land, sea and sky in the name of adventure and may just inspire readers aged 7+ to do the same.”

“Ever wondered what the first weapons were made from, or how the ancient Mongol warriors defeated the armies of China? Famous battles, brave fighters, and ingenious weapons all come alive in this exciting illustrated book.”

Flying Colours: a guide to flags from around the world, by Robin Jacobs & Robert G. Fresson

“By exploring the designs of flags, we can learn all about the histories and aspirations of the countries they represent. Did you know that only the flag of Nepal has more than four sides? Or that the flag of Mozambique features a book, a hoe and an AK47? Robert Fresson’s vintage-inflected illustrations shed fresh light on the wonders of vexillology.”

Peace and Me: inspired by the lives of Nobel Peace Prize Laureates, by Ali Winter & Mickaël El Fathi

“What does peace mean to you? This collection of inspirational ideas about peace is based on the lives of Nobel Peace Prize Laureates of the 20th and 21st centuries, among them Nelson Mandela, Martin Luther King Jr., Mother Teresa and Malala Yousafzai.”

“Are our ears supposed to be a weird shape? Why do we sneeze? What is the point in having skin?

“The human body is one of the most complicated things in the Universe. Join Professor Astro Cat and the whole gang as they journey through all the wondrous parts of the human body, with the help of writer Dominic Walliman himself! From head to toe and everywhere in-between, there’s nothing left out of this fascinating human body odyssey!”

“Meet the bacteria, viruses, and other germs and microbes that are all around, but too small for us to see. Learn how they keep us and our world running.”

For fans of beetles and the Beetle Boy fiction trilogy, this book has lots of facts and information as well as links to the fictional world of Beetle Boy himself.

The Colours of History: how colours shaped the world, by Clive Gifford & Marc-Etienne Peintre

“Why did Roman emperors wear purple? Which colour is made from crushed beetles? What green pigment might be used to build super-fast computers of the future?

“From black to white, and all the colours in between, every shade has a story to tell. Each colour group is introduced with a stunning and interpretive double-page spread illustration, followed by illustrated entries exploring the ‘colourful’ history of particular shades.

“With vivid, thought-provoking illustrations and engaging, bite-sized text, this book is a feast for the eyes and the mind, ready to enthral budding artists and historians alike.”

The Element in the Room: investigating the atomic ingredients that make up your home, by Mike Barfield & Lauren Humphrey

“Did you know that without the ‘lead’ in your pencil, there would be no life on Earth?

“Just about everything in the universe is made from only 92 elements - and from aluminium to zinc, many of them are hiding in your very own home! This funny and fascinating guide is bursting with brilliant facts about the atomic ingredients that make up everything around us. Join scientific sleuth Sherlock Ohms as he investigates the elements, and help his enquiries with explosive experiments.”