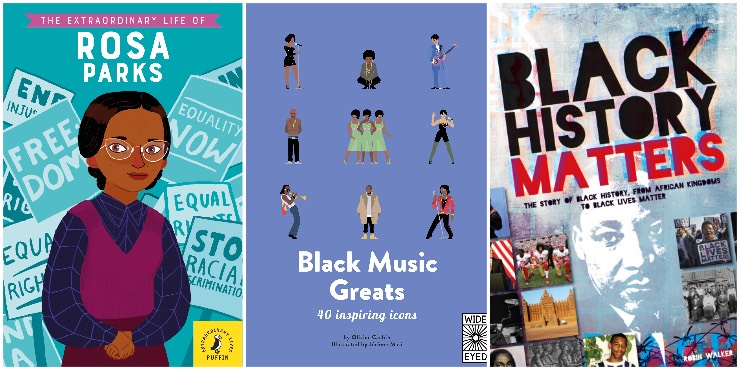 “This title presents an important and hard-hitting account of the history of black people, looking at African kingdoms, slavery, apartheid, the battle for civil rights and much more. Important and inspiring black personalities, from Olaudah Equiano to Oprah Winfrey, are highlighted throughout, while achievements and progress are balanced alongside a look at the issues that continue to plague black communities.”

Michelle Obama: the fantastically feminist (and totally true) story of the inspirational activist and campaigner, by Ann Doherty

“Meet the marvellous Michelle Obama: A+ student, passionate piano player, and a girl who’s not afraid to dream big. Determined to make the world a better place, the grown up Michelle gets to work in helping the community in whatever way she can. But then she meets and falls in love with Barack Obama, who is equally passionate about changing the world and who tells her he wants to become the first African American President of the United States, Michelle knows it’s time to really find her voice.”

“Jamia Wilson brings together 52 icons of colour from the past and present and celebrates their inspirational achievements. Meet figureheads, leaders and pioneers such as Martin Luther King, Nelson Mandela and Rosa Parks, as well as cultural trailblazers and sporting heroes, including Stevie Wonder, Oprah Winfrey and Serena Williams.

“Strong, courageous, talented and diverse, these extraordinary men and women’s achievements will inspire a new generation to chase their dream.”

“In this book, 40 of the most inspirational movers, shakers and innovators in black music history are waiting to be heard. Find out about each artist’s most iconic shows, genre defining techniques, friends, rivals, and nicknames. Each artist profile is complete with 5 must-listen-to tracks: perfect for the budding audiophile.”

“Originally performed for ESPN’s The Undefeated, this poem is a love letter to black life in the United States. It highlights the unspeakable trauma of slavery, the faith and fire of the civil rights movement, and the grit, passion, and perseverance of some of the world’s greatest heroes. The text is also peppered with references to the words of Martin Luther King, Jr., Langston Hughes, Gwendolyn Brooks, and others, offering deeper insights into the accomplishments of the past, while bringing stark attention to the endurance and spirit of those surviving and thriving in the present.”

“Dorothy Vaughan, Mary Jackson, Katherine Johnson, and Christine Darden were good at math - really good. They participated in some of NASA’s greatest successes, like providing the calculations for America’s first journeys into space. And they did so during a time when being black and a woman limited what they could do. But they worked hard. They persisted. And they used their genius minds to change the world.

“In this picture book edition, we explore the story of four female African American mathematicians at NASA and how they overcame gender and racial barriers to succeed in a highly challenging STEM-based career.”

“Katherine Johnson: teacher, mathematician, trailblazer. Award-winning children’s author Leila Rasheed explores the life of the inspirational NASA mathematician made famous by the film Hidden Figures - Katherine Johnson. This gripping series throws the reader directly into the lives of modern society’s most influential figures, with striking black-and-white illustration along with timelines and never-heard-before facts.”

“One day, they ask their Grandma Zindzi Mandela 15 questions about him and his life. Zazi and Ziwelene learn that their great-grandad was a freedom fighter, a President and a Nobel Peace Prize-winner, and that they can carry on his work today.

“The only children’s picture book to be created in collaboration with the Mandela family and Mandela Legacy, this cross-generational title promises to bring Nelson Mandela’s incredible story alive for the next generation.”

“Ella Fitzgerald sang the blues and she sang them good. Ella and her fellas were on the way up!

“It seemed like nothing could stop her, until the biggest club in town refused to let her play. and all because of her colour. But when all hope seemed lost, little did Ella imagine that a Hollywood star would step in to help.

“The inspiring, true story of how a remarkable friendship between Ella Fitzgerald and Marilyn Monroe was born - and how they worked together to overcome prejudice and adversity.”

I Have a Dream: Martin Luther King and the fight for equal rights, by Anita Ganeri

“This title tells the remarkable story of Dr King’s leadership of non-violent efforts to overcome appalling institutionalized racism and prejudice. Presented in a graphic, magazine-style format, the book follows King’s life from his childhood in Atlanta to the March on Washington in 1963 and his assassination in 1968.”

“Featuring 40 trailblazing black women in the world’s history, this book educates and inspires as it relates true stories of women who broke boundaries and exceeded all expectations.

“This beautifully illustrated volume educates and inspires as it relates true stories of black men in history. Illuminating text paired with irresistible full-colour art brings to life both iconic and lesser-known figures.

Little Leaders is also available in board book format for even littler leaders.

“In the Little People, Big Dreams series, discover the lives of outstanding people, from designers and artists to scientists. All of them achieved incredible things, yet each began life as a child with a dream.”

“Rosa Parks grew up during segregation in Alabama, but she was taught to respect herself and stand up for her rights. In 1955, she refused to give up her seat to a white man on a segregated bus, sparking the Montgomery Bus Boycott.

“Her decision had a huge impact on civil rights, eventually leading to the end of segregation on public transport. Rosa has been described as The Mother of the Freedom Movement.”

“Maya Angelou spent most of her childhood in Stamps, Arkansas. After a traumatic event at age eight, she stopped speaking for five years. However, Maya rediscovered her voice through books, and went on to become one of the world’s most beloved writers and speakers.”

“Meet Ella Fitzgerald, one of the most influential jazz singers of all time. This mini biography charts Ella’s life, from her early singing days on the streets of Harlem, to her success as a jazz legend, with the message: ‘It’s not where you come from, but where you’re going that counts’.”

Scholastic’s Voices series puts the spotlight on BAME protagonists from British history. Look out for Empire’s End: a Roman story, by Leila Rasheed in early 2020.

Son of the Circus: a Victorian story, by E. L. Norry

“When a stranger, a man the boys don’t remember ever seeing before, appears in their kitchen, Ted is hit with a shocking revelation. This man is his father - the first black circus owner in Victorian Britain, Pablo Fanque. Before Ted can recover from his shock, he is sent away with Pablo to learn the tricks of the circus trade.

“Pablo is determined for Ted to follow in his footsteps. But can Ted adapt to this terrifying new life amongst strangers? And will he ever see his beloved mother and brother again?”

“This story explores the life of a young West African girl, Eve, living with her mother in the Southwark slums of Elizabethan London. When they hear from a Mary Rose survivor, George Symon, that one of the African free-divers who salvaged its treasures is alive and well and living in Southampton, mother and daughter agree to try to find him. But will the pair survive when George arrives to claim his ‘share’ of the riches? Will Eve overcome her fear of water to rescue her mother from the sea?”

“Mary Seacole is now known for her medical work in the Crimean war, and as a brilliant woman who combated the racial prejudice she experienced in her lifetime. But for a long time her story was lost. From growing up in Kingston, Jamaica as the daughter of a doctress to helping soldiers in the war, discover the details of the amazing life that Mary Seacole led in this illustrated book with real-life stories, timelines and facts.”

“Rosa Parks, the woman known for refusing to give up her seat on the bus, triggered a great shift in the fight for civil rights. Raised in Alabama, Rosa Parks knew all about the racism of her society from an early age. Discover how she became the brilliant activist we know today, in this illustrated book with real-life stories, timelines and facts to bring her extraordinary story to life.”