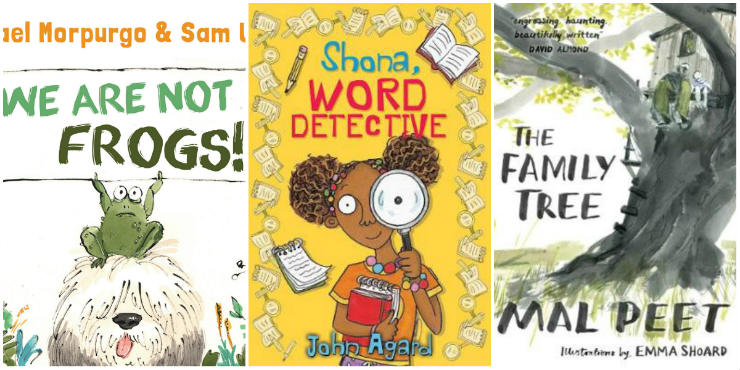 Barrington Stoke, who specialise in books for children with dyslexia and visual stress, have published some more brilliant titles recently.

Norman the Norman and the Very Small Duchess, by Philip Ardagh & Tom Morgan-Jones

“Norman the Norman is at it again! And this time the Duchess of Normandy is determined that her William should have little Norman helping with his ‘Conquest thingy’. After all he is Normandy’s braves broadsword swinging hero!

“But can Norman even make it to the boat on time? Or are there other adventures to be had with robbers, giants, a messenger called Barry, and Matilda the very small Duchess?”

Mariella, Queen of the Skies, by Eoin Colfer & Katy Halford

“Mariella loves nothing more than inventing, but bedtime keeps getting in the way of all her brilliant ideas! So when Mum and Dad won’t take no for an answer there’s only one thing for it - Mariella has to build a rocket-powered flying suit to zap her round the world faster than the setting sun! If anyone can outsmart sleep it’s Mariella. But everyone needs sleep and without it all of Mariella’s brilliant ideas might just disappear.”

“When the rain threatens to ruin the fun at a summer camp, Malik and his friends are tasked with inventing a pram that any baby would love. But when ideas start flowing, tensions run high and it turns out that not everyone agrees on exactly what a baby would need. Only the PramBusters can be sure to sort this out!”

Some parents might remember this as Design a Pram.

We Are Not Frogs!, by Michael Morpurgo & Sam Usher

“The frogs always beat the toads at long jump but the toads don’t mind - anything for a quiet life. But then the children - and Mutt the dog - come in search of some good jumpers, and the toads see an opportunity to get their own back. Soon the poor frogs have been gathered up and put in an ice-cream tub, and they’re hopping mad!”

“When the village wires get crossed after a storm, there’s a lot of confusion and plenty of missed connections. Margaret can’t run her summer fair, Jai can’t speak to Aditi, and Will is rather happy because no one can tell his mum how much trouble he’s in! Can the villagers learn to love their neighbours and could the great telephone mix-up really be a blessing in disguise?”

“Young Rose dreams of sewing beautiful dresses for the women of Paris. But when a chance encounter with royalty changes her life, Rose must draw on all her skills to create the most breathtaking dress of them all.

“Based on the life of Rose Bertin, the woman credited with creating haute-couture, this is a story to inspire bold girls and boys everywhere.”

“Shona has always loved words. She even has her very own strange word thesaurus! When her and her classmates learn that some languages are dying out, Miss Bates tasks them with becoming top-class word detectives, proving to themselves and their families that there are many beautiful languages still thriving, even within their own classroom.”

The Knights and the Best Quest, by Kaye Umansky

“What’s the point of a daring quest without a little competition? The Knights of the Drop-Leaf Table don’t think there is one, so it’s time to draw up the rules, find a suitable prize, hit the road on their less-than-trusty steeds and prove who’s best! Can they return laden with magic amulets, damsels in distress and dragon’s heads? Or is the draw of one of Mrs Spunge’s delectable sandwiches far too tempting…”

“Noah Scape loves dinosaurs and spaghetti with tomato sauce. But Noah doesn’t always get what he wants and when school doesn’t revolve around dinosaur facts and lunch isn’t always his tried and tested favourite, well - enough is enough! It’s time for him to stop wishing and to decide on exactly what he needs; a world full of Noahs!”

“It’s a routine job for a freelance knight: a wealthy merchant needs protection on the journey back to his remote home town. But on the last night he is woken by the terrified merchant insisting that a dragon has killed his favourite horse. Free Lance finds the remains of the horse and decides wolves are responsible - but are they?”

“When a man returns to his childhood home and visits the derelict tree house in which his father once chose to live, he recalls the past unravelling of his family, the unspoken strangeness of their lives, and the impact on his own adult life.”