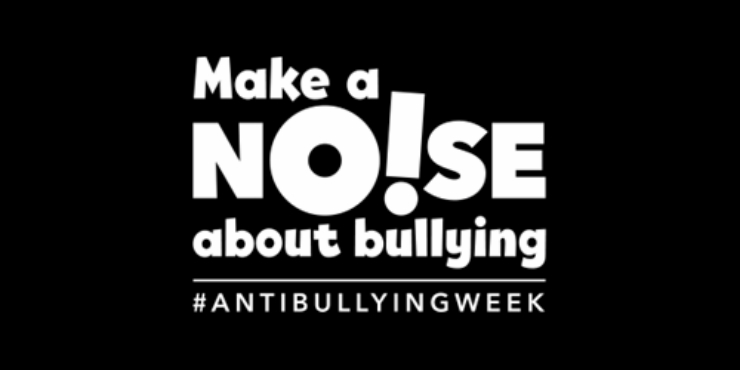 This week is Anti-Bullying Week. Bullying can happen to anyone, at any age and anywhere.

We have compiled a range of fiction books that explore themes and topics such as bullying, anxiety, friendship and acceptance to aid discussion and help celebrate kindness throughout the week. There are also some non-fiction books, links to resources and helpline numbers if you need someone to talk to.

Willy the Wimp by Anthony Browne

Willy wouldn’t hurt a fly — he even apologises when someone hits him. The suburban gorillas call him Willy the Wimp. Then, one day, Willy answers a bodybuilding advertisement — with hilarious results!

He’s wild, he’s wicked, he’s Little Rabbit Foo Foo! The bully-boy bunny likes nothing better than to ride through the forest bopping everyone on the head. Wriggly worms, tigers, no one is safe. But here comes the Good Fairy — and she’s not amused.

Rex wrecks it! by Ben Clanton

Gizmo, Sprinkles and Wild are fed up. Every time they build something with their blocks, Rex wrecks it! Whether it’s an out-of-this-world rocket, a magical heart or the biggest, strongest, most awesomerific castle ever, Rex sends it crashing down with a ‘rawr!’ (and sometimes a sheepish ‘rawry!’). Isn’t there any way to make playtime fun for everyone?

Everyone knows that tyrannosauruses are big and scary, so when a placid duckbill dinosaur’s egg ends up in the wrong nest confusion is sure to ensue. When the baby dinosaur hatches out, he’s so out of place that his grisly big sisters call him Tyrannosaurus Drip.

Mandy White is being bullied at school. Life is miserable until she meets Tanya. Four years older and ten times cooler, orange-haired Tanya is an unlikely friend.

When Kate is bullied by a boy named Mark, it gets so bad she doesn’t want to go to school. She can’t believe it when Mark is invited to her brother’s party. As Mark keeps picking on her, Kate sees her chance to get her own back.

How to fly with broken wings by Jane Elson

Set in World War Two and dealing with bullying and Asperger’s, it’s by Jane Elson, who wrote the brilliant A room full of chocolate. A heart-warming tale about a boy who just wants to make friends, and the girl who shows him how.

Joe all alone by Joanna Nadin

A heart-warming/heart-breaking story about Joe, an autistic boy left alone in his tower block flat whilst his mum holidays in Spain. It incorporates major life themes such as bullying, friendship and racism into a truly remarkable book. A marvellous, inspiring and funny read. Great for avid readers of 9 and above.

Nick is stuffed in his locker. Again. It’s not so bad. Lockers are roomier than you’d think — especially when you’re the shortest kid on the planet, which is exactly why Bully-Boy Roy stuffed him in there in the first place. The school counsellor says Roy has issues. The only issue Nick can see is that Roy is a mutant troll. Nick’s friends Molly and Karl think the troll needs to be defeated. Together, they are the Odd Squad!

The Boy in the Dress by David Walliams

David Walliams’s beautiful first novel will touch the hearts (and funny bones) of children and adults alike. As one Amazon reviewer puts it, “this story helps to remind us all that we are not all the same, and we must show tolerance for others.”

We are all made of molecules by Susin Nielsen-Fernlund

Ashley and Stewart have nothing in common except their newly blended family. Times are tough for both of them until genius Stewart rescues fashion icon Ashley from her heel of a boyfriend, and in so doing, cements a bond between them. The book deals with issues such as bullying, sexuality and bereavement in a sensitive manner. It’s a heart-warming read and deserves to do well.

The funny, sweet and incredibly moving story of Auggie Pullman. Born with a terrible facial abnormality, this shy, bright ten-year-old has been home-schooled by his parents for his whole life, in an attempt to protect him from the stares and cruelty of the outside world. Now, for the first time, Auggie is being sent to a real school — and he’s dreading it. The thing is, Auggie’s just an ordinary kid, with an extraordinary face. But can he convince his new classmates that he’s just like them, underneath it all? Wonder is a book you’ll read in one sitting, pass on to others, and remember long after the final page.

Lis London is hoping for a fresh start when she arrives in the sleepy village of Hollow Pike — but nothing here is as it seems. Lis has a recurring nightmare where someone is trying to kill her. Exploring themes of bullying, and obsession this thriller is a real page-turner.

Lord of the Flies by William Golding

In this, his first novel, William Golding gave the traditional adventure story an ironic, devastating twist. A plane crashes on an uninhabited island and the only survivors, a group of schoolboys, assemble on the beach and wait to be rescued. Before long the well-behaved party of schoolboys has turned into a tribe of faceless, murderous savages.

Are there practical things you can do to stop being bullied — at home, at school and online? What are frenemies and how can you deal with them? How can you learn to make friends and respect yourself? This guide will tell you what bullying is, where it happens, and what you can do about it.

Imagine walking around with a knot in your stomach, each day, every day. That’s how many victims of bullying feel. Others suffer more — and take their own lives. This book shows how to understand and deal with the bullying that occurs every day in streets, schools, and the digital world, exploding some myths along the way.

Accessible yet sophisticated book that explains the growing problem of cyber bullying and offers good advice on how to deal with it.