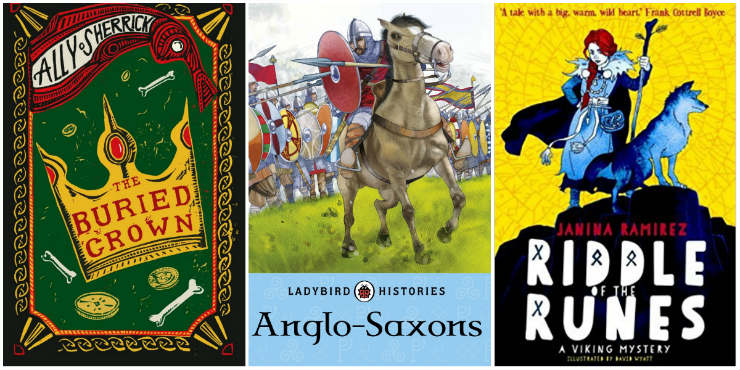 The Sutton Hoo roadshow is coming to several of our libraries over the next few months. We’ve picked out some of our favourite Anglo-Saxon themed children’s books to mark the occasion.

The Buried Crown, by Ally Sherrick

“Britain is on the brink of invasion. George is sent to the countryside while his brother and guardian, Charlie, fights overseas. But the war is closer than he thinks. Nearby, an ancient burial ground hides a treasure Hitler is desperate to possess. George must find and protect it before it’s too late.”

“In fifth-century Denmark, a murderous monster stalks the night, and only the great prince of the Geats has the strength and courage to defeat him. This work retells and illustrates Beowulf’s terrifying quest to destroy Grendel, the foul fiend, a hideous sea-hag and a monstrous fire-dragon.”

“Magnus is the son of Harold Godwinson, lord of the Southern Saxons and ruthlessly ambitious claimant to the throne of England. Overnight, Magnus finds himself cast centre-stage in the blood-soaked family feud that led to one of history’s most famous battles.

“This is the family tragedy behind 1066: live it with Magnus, as the wolves of history close in on his Anglo-Saxon boyhood.”

The Riddle of the Runes, by Janina Ramirez

“The Viking town of Kilsgard has its fair share of mysteries and in this exciting new series, young investigator and shield maiden Alva follows the clues to solve them. Fierce, stubborn, and curious-Alva’s bound to get in trouble along the way, but all that matters is being first to the crime scene.”

Freedom for Bron: the boy who saved a kingdom, by N. S. Blackman

“Slave boy Bron can usually avoid the wrath and the stick of his master, the grumpy village blacksmith. But Bron’s life is dull and lacking in friendship - and he is always hungry.

“Then, one day, a Saxon lord arrives in the village, and Bron is finally granted a chance to escape.”

“Rosemary Sutcliff recount’s Beowulf’s most terrifying quests: against Grendel the man-wolf; against the hideous sea-hag; and, most courageously of all, his fight to the death with the monstrous fire-drake.”

You Wouldn’t Want to be an Anglo-Saxon Peasant!, by Jacqueline Morley & David Antram

“You’re a farmer’s son living in England in the early seventh century. Your people are descendants of invaders from Northern Europe: the Angles, the Saxons and the Jutes, who arrived about 200 years earlier, seized land from the native Britons and made themselves at home here. You will experience first-hand the culture and history of the Anglo-Saxon peoples, including how they survived, ate and dressed, the stories they told, and how they responded to the coming of Christianity.”

From the ever-popular Horrible Histories series.

Discover the Anglo-Saxons, by Moira Butterfield

“Why did the Anglo-Saxons come to Britain? Was there a King Arthur? Who was buried at Sutton Hoo? This book shows you how to find out more about the past and helps you to start a history project of your own.”

“This title introduces readers to life in Anglo-Saxon Britain from a child’s viewpoint. The book introduces general features of the time period, but focuses on what life was like for children, including where they lived and where they worked. The text is supported by primary source material (paintings, artefacts, quotes, etc.) that brings the past to life. A final section explains how we use historical evidence to reconstruct the past.”

“Packed with everything you need to know about this great civilisation, this book is packed with information about topics such as where and how the Anglo-Saxons lived, and their impact on history.”